Our Friday Reads are these new books out this week, and related content you won’t find anywhere else.

Lionel Shriver, whose book We Need to Talk About Kevin was an international bestseller, is back with The Mandibles, a novel about an imagined future in which America defaults on its loans and everyone’s savings are wiped out. But before she was known for her novels, Shriver worked as a journalist.

Death by Video Game: Danger, Pleasure, and Obsession on the Virtual Frontline, by Simon Parkin, explores how gamers can play video games to death. Literally. Yikes. Here’s fascinating exploration of how video games also expose people to, of all things, classical antiquity.

Fans of Elena Ferrante will want to revisit Italy’s revolutionary past in We Want Everything, by famed Italian writer, poet, and activist Nanni Balestrini. In the 1970s Balestrini fled Italy after being accused of counter culture terrorism; some scholars fear our current political situation might lead to similar threats to civil liberties and free speech.

Anne Tyler has a new novel called Vinegar Girl, a modern retelling of Shakespeare’s The Taming of the Shrew. JSTOR has many scholarly reviews of Tyler’s work; this overview of Tyler’s career is a good place to start.

Lawyer Joseph Madison Beck has written My Father and Atticus Finch: A Lawyer’s Fight for Justice in 1930s Alabama, about how his father defended a black man charged with raping a white woman. The trial was called State of Alabama vs. Charles White, Alias, and was much publicized when Harper Lee was twelve years old. The case may have been among her inspirations for To Kill a Mockingbird. 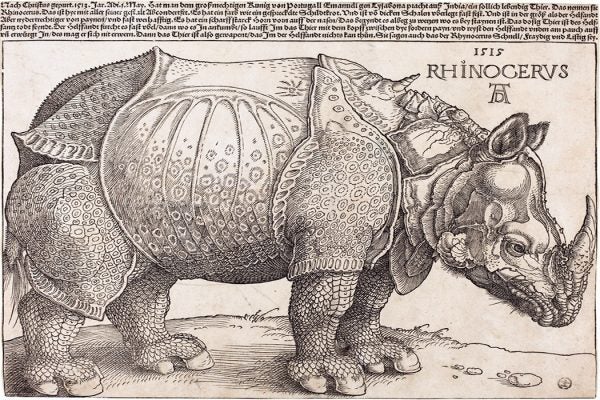 Dürer’s Rhinoceros and the Birth of Print Media

Dürer's image of a rhinoceros which drowned off Italy 500 years ago remains one of the world's most famous prints.