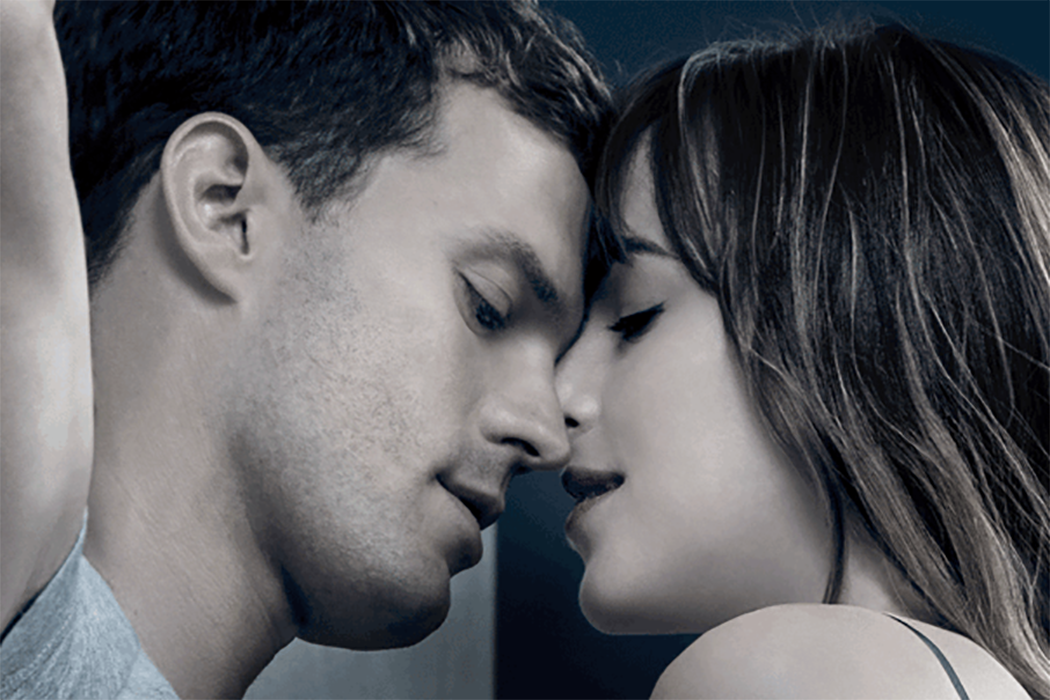 Deep down I know I’m hungry, but right now, my stomach is in knots. Sitting across from the only man I have ever loved and debating our uncertain future does not promote a healthy appetite. I look dubiously at my food.

“So help me God, Anastasia, if you don’t eat, I will take you across my knee here in this restaurant, and it will have nothing to do with my sexual gratification. Eat!”

Amidst the bland sex scenes and clichéd professions of true love, Christian and Ana’s struggles over food stand out for their strangely discomfiting, visceral quality. Far from being just another example of Christian’s domineering personality, these fights over Ana’s reluctance to eat are key to understanding Fifty Shades’ worldwide popularity.

Fifty Shades is not only a fantasy of unrestrained consumerism. It is also a fantasy of women’s work and the rewards that work brings.

As the writer Heather Havrilesky argues in her Baffler essay “Fifty Shades of Late Capitalism,” the Fifty Shades trilogy offers a vision of “be[ing] ushered into the hallowed realm of the 1 percent.” Christian showers Ana with expensive gifts ranging from an Apple MacBook Pro laptop to Cartier earrings to an Audi sports car. According to Havrilesky, this rampant indulgence in consumption reflects an attitude that money can buy everything, and that the super-rich therefore have the power to do anything they want. Christian embodies this attitude, and Ana learns it from him.

Fifty Shades, however, is not only a fantasy of unrestrained consumerism. It is also a fantasy of women’s work and the rewards that work brings. Ana engages in what the post-Marxist philosopher Michael Hardt calls “affective labor” when she subordinates herself to Christian, thereby producing feelings of pleasure in Christian and reaffirming their relationship as Dominant and Submissive. Affective labor is labor that produces emotions, and that, in doing so, produces and maintains social relations. Writing in 1999, Hardt observed that, as a result of the shift from industrial manufacturing to services in the last quarter of the twentieth century, capital increasingly incorporated affective forms of labor previously associated with women’s unpaid domestic work. Organizations now pay people, especially women, to produce affect. This trend can be seen in the healthcare, hospitality, childcare, and cleaning services sectors and in other service industries that focus on making people feel comfortable and happy.

Despite the trilogy’s emphasis on Ana’s transformation from college student to owner of her own publishing company, Ana’s real work in Fifty Shades is her affective labor for Christian. Ana spends much more time on her relationship with Christian than on her job as an editor. Christian interferes in Ana’s work at the publishing company, persistently urging her to work for him instead. When she refuses, he purchases the press, so that she ends up effectively working for him anyway. Initially horrified that she is “fucking [her] boss’s boss’s boss,” Ana soon settles into flirting with Christian at the office using her work email, all the while insisting that “[she is] trying to work” and that he should “[n]ow let [her] get on with [her] job.”

When dressing up for work in the morning, Ana gravitates towards revealing outfits that are clearly not office-appropriate: “In the walk-in closet I put on a dark red fitted dress with a square cut neckline, cut quite low. Yes, this will do for work.” Later in the trilogy, Ana pretty much gives up all attempts at dressing professionally. “I want something sexy,” she muses as she rummages through her extensive wardrobe. “Something that might galvanize Christian into action.” Ana’s conflation of romance with work suggests that her real job lies in pleasuring Christian.

Ana’s work in pleasuring Christian is, in fact, doubly affective in nature. Ana produces emotion and is emotionally invested in doing so. Despite her avowed independence, Ana wants to submit to Christian because it gives her pleasure to do so. She consistently obeys Christian’s commands both in and outside of the bedroom:

“This is mine,” he whispers aggressively. “All mine. Do you understand?” He eases his finger in and out as he gazes down at me, gauging my reaction, his eyes burning.

“Yes, yours,” I breathe as my desire, hot and heavy, surges through my bloodstream, affecting… everything.

In actively desiring to subordinate herself to Christian, Ana embodies what the feminist theorist Kathi Weeks calls the “post-Fordist work ethic.” In The Problem with Work, Weeks argues that employees’ attitudes toward work have become more significant in recent years. Unlike Fordist industrial production, the post-Fordist service-oriented economy demands “not just the labor of the hand, but the labors of the head and the heart.” Hence, a new work ethic becomes necessary to produce workers who are committed, Weeks argues, “[e]specially in the context of service work and work with an affective or communications component.”

In the light of these labor conditions, Ana loving Christian in Fifty Shades becomes an allegory of “loving one’s work of loving.” Ana represents the ideal worker in the post-Fordist economy, and this has been critical to Fifty Shades’ success with women readers. Affective labor has been—and still is—predominantly performed by women. As Hardt and his co-author Antonio Negri explain in Multitude, female affective labor, despite its growing importance in post-Fordist capitalism, is generally low status and low paying. In the fantasy world of Fifty Shades, however, Christian rewards Ana handsomely. In this way, Fifty Shades speaks to the increasing centrality of female affective labor in the global shift to post-Fordist capitalism while persuading women readers around the world that they will be well compensated. This dream of upward mobility in turn helps capital to perpetuate its hold over female workers, urging them to devote themselves more fully to producing emotion in the service of capital.

Not eating enough to keep her body going is the only substantial form of resistance that Ana mounts to Christian’s increasing control.

In exchange for material rewards, Ana willingly accepts the many forms of bodily discipline that Christian imposes on her to ensure that she is healthy and fit for work. “I need you fit and healthy,” Christian repeatedly tells Ana as he introduces her to the grueling demands of BDSM sex. Ana obeys Christian’s orders to exercise four times a week, to get adequate sleep, to dress sexily, and to take contraceptive pills. But there is one thing that Christian finds it difficult to make Ana do: eat. Not eating enough to keep her body going is the only substantial form of resistance that Ana mounts to Christian’s increasing control over her body. The more Ana gets involved with Christian, the thinner she becomes, prompting Christian to worry that “[she is] fading away in front of [him].” Whereas Christian is concerned that Ana’s poor health will make her unproductive, Ana is perversely gleeful about losing so much weight: “I don’t want to think about my weight; truth is, I like being this slim.”

Ironically, Ana verges on becoming physically unable to serve Christian because she over-exerts herself in complying with his demands. Ana is often so overwhelmed with desire for sex that she does not feel like eating (“I’m not hungry. Not for food.” “My appetite has become uncertain again… more… more sex… yes, please”). She is also often too stressed out with maintaining and enhancing her romantic relationship with Christian to have much interest in food. When Christian reveals that he recently bathed one of his former Submissives, Ana’s jealousy causes her to lose her appetite: “I’m reeling, staring down at my uneaten macaroni. The sight of it now makes me nauseous.”

Ana thus resists Christian’s exploitation of her affective labor. Unlike the hunger strikes that Russian prisoners, British suffragettes, Mahatma Gandhi, and other political protestors have carried out since the late nineteenth century, Ana’s rejection of food is an extremely pessimistic and limited form of resistance that sees self-destruction as the only way out. In the Fifty Shades universe, the only way Ana can elude Christian’s (= capital’s) grasp is by starving herself until she all but disappears. But the Fifty Shades trilogy ultimately does not allow for even this self-destructive possibility of anti-capitalist resistance. By the end of the series, Ana (now Mrs. Grey) submits herself completely to the work of producing children. In so doing, she develops a hearty appetite not only for sex, but also for food:

He pulls over the tray on wheels and lifts the cover to reveal my breakfast: oatmeal with dried fruits, pancakes with maple syrup, bacon, orange juice, and Twinings English breakfast tea. My mouth waters; I’m so hungry. I down the orange juice in a few gulps and dig into the oatmeal.

Christian is, of course, overjoyed (“Oh, Ana, it’s good to see you eat”). For the first time, Ana enthusiastically undertakes to keep her body well-nourished. Echoing the neoliberal dogma that there is no alternative to capitalism, she capitulates to the demand that workers maintain their health so that they are more productive.

Fifty Shades’ celebration of “loving work” should give us pause. In “‘Hours for What We Will’: Work, Family, and the Movement for Shorter Hours,” Weeks argues that we should rethink our valorization of work. Weeks proposes shorter working hours, which would give us the time and freedom to reassess how we do the work we do, why we value it, and how we might transform the ways in which we work with others. The chilling choice that Ana faces in Fifty Shades—either surrender your autonomy to capital or cease to exist—compels us to explore alternative ways of being in the world. Tempted to stay an extra hour at the office? Maybe not tonight. 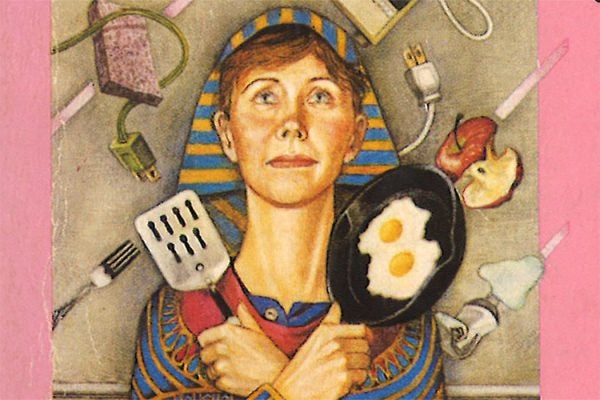 A Forgotten Feminist Novel About the Creative Power of Rage

Remembering history helps us to parse the present, and it follows that women struggling to process these "decades of pent-up anger" can find apt reading material in the feminist fiction of the 1970s.