For the Endangered American Eel, A Long, Slippery Road to Recovery

The endangered American eel, once abundant along the U.S. East Coast, is critically important in keeping rivers ecologically sound. 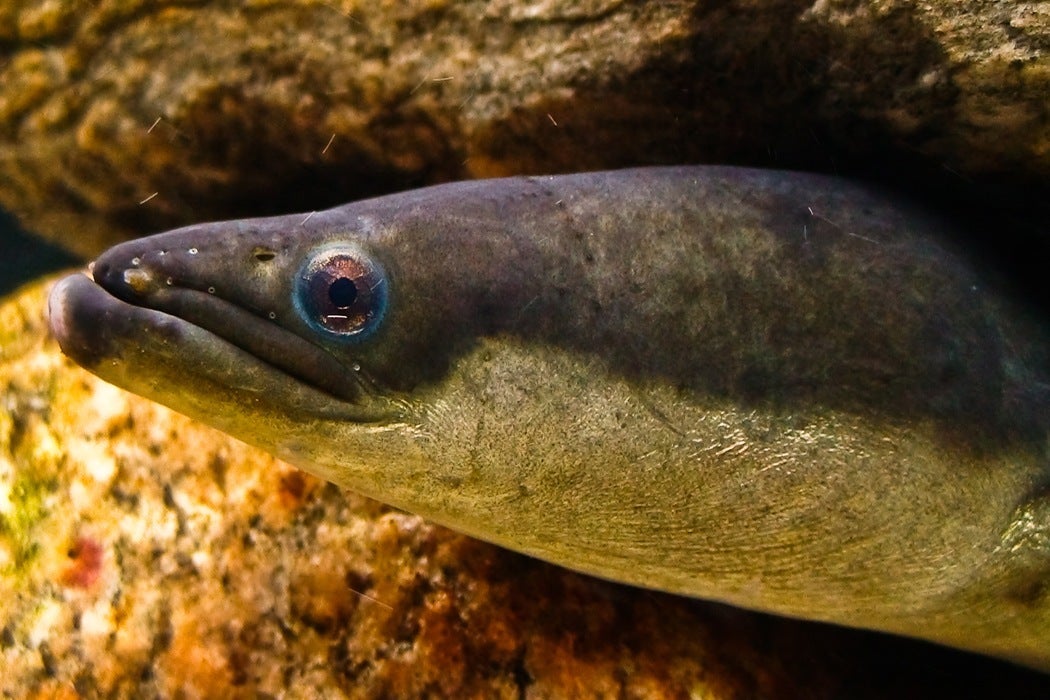 It would be in even worse shape without the Delaware River, which flows unimpeded 330 miles through New York, Pennsylvania, New Jersey, and Delaware. Few, if any, eel refuges are more important, and management on the Delaware provides a global blueprint for eel recovery.

American eels are “catadromous,” meaning they live in brackish and fresh water and spawn in salt. They thrive in the Delaware because there are no dams on the main river to block migration from and to the sea and because water quality is excellent.

Maintaining that water quality are the eels themselves and the role they play in sustaining the Eastern elliptio mussel. These mussels, which filter out silt and other pollutants, abound in the Delaware because they depend on eels for distribution, parasitizing them with “glochidia,” their larvae, which eventually detach. Some mussel species attract fish by waving appendages that resemble worms or minnows, then they blast them with glochidia. The eastern elliptio disperses glochidia in a mucus web that eels swim through.

The endangered American eel, once abundant along the U.S. East Coast, is critically important in keeping rivers clean and ecologically intact.

Because eels have unrestricted access to the main river, the Delaware sustains an estimated 280 million eastern elliptios that filter the entire flow six times before it reaches Delaware Bay. What’s more, these mussels keep the rocky substrate largely free of silt. So invertebrates—which nourish eels, other fish, birds, and mammals—can proliferate; and eels can hide from predators.

A host of executive and legislative actions, spanning decades, have made the Delaware River a laboratory for conservation of eels and their habitat. The upper watershed is protected both as a Wild and Scenic River corridor and as the water supply for New York City. Last June, New York State banned fracking in its part of the basin, and the once-filthy industrialized lower reach has been dramatically improved by the U.S. Clean Water Act.

Compare the Delaware’s ecological health with that of the dam-choked, nearby Susquehanna River, which flows from New York through Pennsylvania and Maryland. Conowingo Dam, built 10 miles above the confluence with Chesapeake Bay in 1928, wiped out 400 miles of eel habitat on the main river and hundreds of more miles on tributaries.

But here and elsewhere, eel recovery is underway. The U.S. Fish and Wildlife Service is trapping eels in the dam’s outfall and releasing them above. “We’re moving eels past the four lower hydro dams,” says project leader Sheila Eyler. “Once we see a fair number maturing, we’ll start looking at downstream survival.”

Pine Creek, collected by the Susquehanna above the dam, was essentially devoid of juvenile eastern elliptios before the ongoing recovery effort. But a 2014 survey turned up 78 mussels so young they had to have been transported by the recently stocked eels. With fracking and associated roads silting the Susquehanna system, mussels are needed now more than ever.

Not all eels transport mussels along rivers. Dozens of eel species around the globe spend their entire lives at sea. But 16, including the American eel, are catadromous; and many have suffered the same fate or worse. In especially bad shape are the European eel (Europe and North Africa) and the Japanese eel (Vietnam, the Philippines, Taiwan, mainland China, and the Korean peninsula).

The Japanese eel, listed as “endangered” by the IUCN, spawns in the North Pacific along the West Mariana Ridge. “Endangered” European and American eels diverged only two million years ago and are so closely related they sometimes hybridize. They both spawn in the Sargasso Sea between the West Indies and Azores.

Turbines at power dams are a major source of mortality for all catadromous eel species. Mature eels, which migrate seaward at night, retreat from the lights that can guide fish like salmon and shad away from turbines toward safe downstream passage. Screens over turbines are anathema to power companies because they clog with debris and reduce generating flow.

Fisheries managers are looking to the Delaware river as a model for bringing back this uncharismatic, but vital, fish.

Eel recovery is such a new science that efficient downstream passage isn’t available. It may be soon, however. US Geological Survey biologist Alex Haro and his colleagues at the Conte Anadromous Fish Research Center in Turners Falls, Mass., are testing what promises to be the first truly effective device. Their “Conte Airlift Bypass” is a pipe that’s inserted vertically on the upstream side of a dam and infused with air. The bubbles create a flow that attracts the bottom-hugging eels and carries them up past the turbines and safely over the dam. Power companies love the idea because the water gets recycled for generation. “Our main concern was that eels wouldn’t like the bubbles,” says Haro. “But they don’t mind them at all.”

Trials for the Conte Airlift Bypass are scheduled in Europe and New Zealand. The large size of New Zealand’s eels — which can reach eight feet in length and weigh over 100 pounds—makes them particularly vulnerable to turbines.

And even on the Delaware system, eel recovery is happening on tributaries via dam removal. “Elvers”—immature eels migrating from the sea—can crawl like caterpillars up and over smaller dams, but it’s thought that for every meter of dam height upstream, eel passage is reduced by roughly ten percent; biologist Richard Horwitz of Drexel University in Philadelphia has found that all passage ends at somewhere around nine meters. Horwitz and his colleagues are monitoring eel populations on the Paulins Kill River in preparation for dam dismantling by New Jersey, The Nature Conservancy, and American Rivers. “We’re finding lots of small eels downstream and a few upstream,” says Horwitz.

Americans don’t eat many eels, but striped bass do. So there’s a robust domestic market for eels as bait. They’re caught along most of the Atlantic coast in pots and fyke nets laced with crushed horseshoe crabs. Shorebirds, exhausted from migration, depend on horseshoe crab eggs for their refueling stop in the Delaware Bay, none more so than the red knot, which migrates 9,300 miles from its winter range in Patagonia to its Arctic breeding grounds. Eel fishermen killed so many horseshoe crabs in Delaware Bay that the red knot was listed as federally threatened in 2014. Now horseshoe crabs are recovering under strict harvest controls, and so are red knots.

The bait fishery for eels is easier to manage and less dangerous to eel populations than the fishery for post-larval “glass eels,” still legal in Maine and South Carolina. In 2015, glass eels were selling to foreign buyers for $2,500 per pound. Unlike Americans, Asians and Europeans have long relished their eels as table fare, grievously overfishing them even as they’ve subjected them to the same environmental insults eels face on the western side of the Atlantic.

Eel larvae—aptly described by Maine Sea Grant’s Catherine Schmitt as “transparent willow leaves with teeth”—drift on currents. As they near land they begin to look more like eels, though they’re still transparent. When these glass eels start acquiring pigment they’re called elvers. Elvers transform to “yellow eels.” When yellow eels are ready to spawn, which may require 30 years for females, they take on a silvery hue. “Silver eels” can sometimes leave the water and move snakelike around obstructions that block downstream passage. They cease feeding; organs break down; and when they reach the Sargasso Sea, they spawn and die.

One thing that catadromous eels have going for them is that they don’t home in to their natal water like salmon, which live in saltwater and spawn in fresh. Eel larvae just drift on ocean currents until they hit land, then move up the nearest river. So there are often elvers below dams that long ago eliminated eels from upstream reaches.

That’s why recovery is possible even on rivers devoid of eels for decades. On the heavily dammed Roanoke River, there were no eels above the dams and few below. But a federal re-licensing project being implemented at the first dam requires increased flows that are now attracting eels. Also required is upstream passage. Dominion Resources, the dam’s operator, is working with federal and state agencies to move eels over the first dam, a much easier task than downstream passage past turbines because of the elvers’ climbing ability. Ramps lined with rough material like Astroturf have been the traditional prescription for elver passage on other rivers. But the Roanoke partners are having better luck with PVC pegs that elvers can wrap around and push against.

Elver passage at the Roanoke’s next upstream dam won’t happen until a certain threshold of eels shows up at its base, and it may never happen at the third dam because the reservoir it impounds sustains popular gamefish. Managers worry that eels would infect them with alien swim-bladder parasites they’ve acquired, presumably from Japanese eels cultured on the Gulf Coast. When silver eels appear in the reach before the third dam, downstream passage will be provided—perhaps with the Conte Airlift Bypass.

Because eels don’t necessarily return to their natal water, the glass-eel fishery in Maine and South Carolina potentially impacts eel abundance in rivers like the Roanoke, Susquehanna, and Delaware. That fishery could end if the 181-nation Convention on International Trade in Endangered Species of Wild Fauna and Flora listed the American eel on Appendix II—which prohibits commercial export unless the country of origin deems it safe for the species. But on April 28 the U.S. Fish and Wildlife Service announced that it would not request that status. The European eel is already on Appendix II, and the Japanese eel is expected to be considered for Appendix II in two years.

While extinction of any of the world’s catadromous eels seems unlikely in the foreseeable future, restoring them to healthy, ecosystem-sustaining populations will be challenging. Despite all the work in the U.S., Great Lakes-bound American eels ascending St. Lawrence River fishways have declined by 97 percent since the mid-1980s.

As a result, there have been calls to list the “St. Lawrence eel stock” as federally “endangered,” but because eel migration from the sea is random there’s no such thing as a river’s “eel stock.” The St. Lawrence crash suggests major trouble for the entire, current-driven pulse of juvenile eels from the Sargasso Sea.

Read the original article on Yale e360. To read more from Yale e360, follow them on Twitter. Copyright 2016. 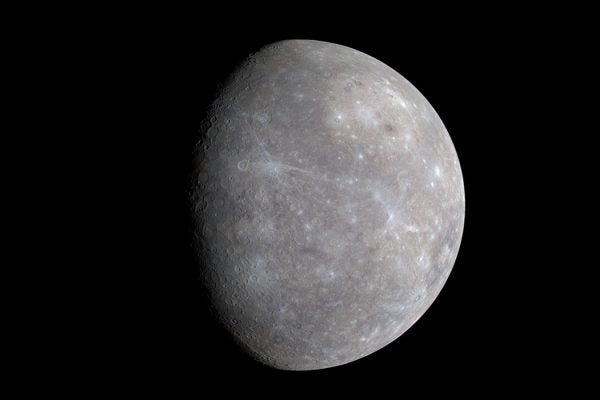 Where in the Solar System is Vulcan?

A hypothetical Planet Vulcan was the best explanation for strange astrological phenomena—until Einstein, that is.

The native red squirrel population in the UK has been decimated by the encroachment of its American cousin, an invasive species. Could a "gene drive" help?

The Thick-Billed Parrot Is Not Extinct–Not Yet

But one hasn't been seen in the U.S. since 1995, not long after the end of the last reintroduction program.