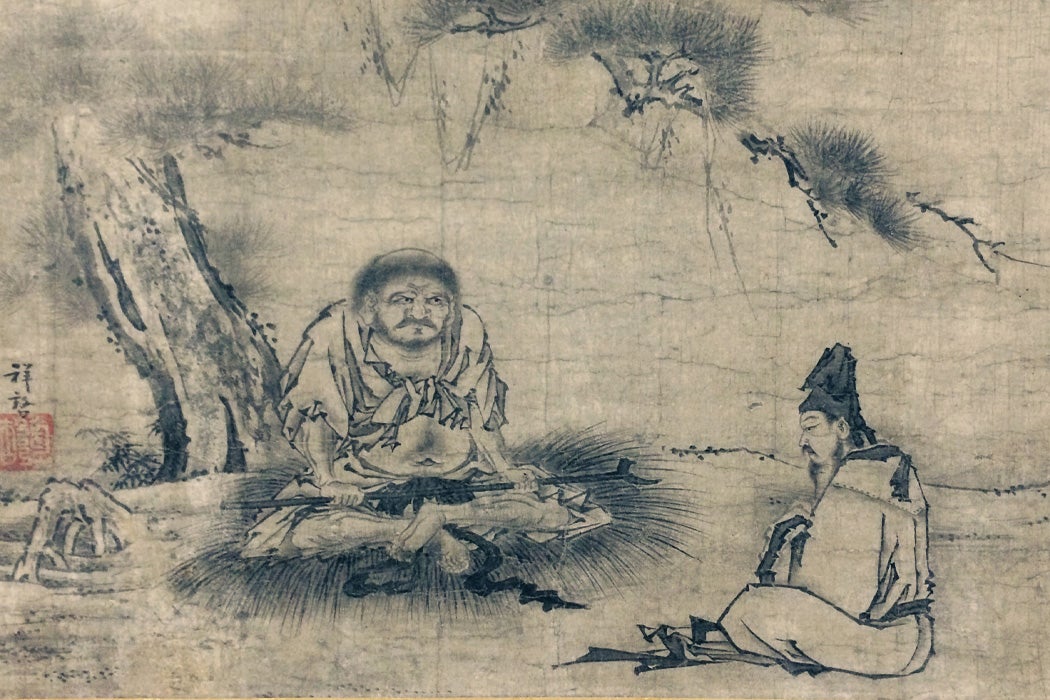 Blood-red cinnabar and gleaming gold; fickle mercury and fiery sulphur: these were the ingredients of immortality, according the Chinese alchemists of the Tang dynasty. They are also deadly poisons. No fewer than six Tang emperors died after downing elixirs meant to grant them eternal life.

The emperors were not alone in their obsession. The pursuit of immortality fascinated scholars and statesmen alike. The famous poet Po Chu-i, for one, was obsessed with creating the elixir. He spent hours of his life bending over an alembic, stirring concoctions of mercury and cinnabar.

Po Chu-i had reason to believe he might succeed. At the time, there was a rumor going around that he was destined for eternal life. The story went like this: a seagoing merchant was shipwrecked on a strange island. After wandering for some time, he came upon a palace, inscribed with the name Penglai. Inside the palace, he found a vast empty hall. It was the legendary island of the immortals, and they were waiting for the poet to join their ranks.

Nonetheless, the poet never succeeded in creating a true elixir. In the waning years of his life, Po Chu-i mourned his failure:

My grey hairs in autumn multiply;
Cinnabar in the fire melted away.
I could not save the “young maid,”
And stop my turning to a frail old man.

Yet Po Chu-i was lucky to be growing gray hairs at all. Many of his friends died in the pursuit of eternal life:

At leisure, I think of old friends,
And they seem to appear before my eyes…
All fell ill or died suddenly;
None of them lived through middle age.
Only I have not taken the elixir;
Yet contrarily live on, an old man.

By the end of the Tang dynasty, the obsession with the elixir had claimed so many lives that it fell out of favor. It was replaced by a new kind of alchemy: a Taoist practice called neidan, or internal alchemy—so named because the alchemist becomes the alchemical furnace, concocting the elixir in the alembic of their own body. Taoism conceives of body as a landscape, an internal world of lakes and mountains, trees and palaces. The practitioner retreats into this landscape to practice their alchemy.

If the alchemists weren’t careful, demons would latch on to them and lead them astray with wild visions.

Meditation and breathing exercises replaced the crystals and metals of external alchemy. Teachers instructed practitioners to make their bodies “like a withered tree” and their hearts “like cold ashes.” With diligent practice, they may begin to notice the signs of the internal elixir cooking inside their bodies: their noses fill with a delicious smell and their mouth with a sweet taste; red mist swirls over their heads; strange lights glow from their eyes. If they succeed, an immortal body begins to gestate inside them like a baby. Their bones begin to turn to gold, and finally, the immortal body emerges like a butterfly from a cocoon, leaving behind a corpse as light as an empty husk.

But even without the toxic elixirs, internal alchemy was dangerous. After days without food or rest, the accounts warn, “your clever spirit will leap and dance. You will sing and dance spontaneously, and utter crazy words from your mouth. You will compose poetry and will not be able to be restrained.” If the alchemists weren’t careful, demons would latch on to them and lead them astray with wild visions: phoenixes, monsters, jade maidens, pale-faced scholars. If they responded when these figures called, they would be caught in the demon’s trap, and all their diligent effort wasted.

Developing the immortal self was a demanding task. If an adept started the process late in life, it was likely that they would die before the immortal body was complete. If they felt the end approaching, they might have to fight off the demons of death and decay, calling up the spirits that defend each part of the body—the gods of the gallbladder, liver, spleen, and lungs, the 84,000 gods of the hairs and pores—to beat back the enemy.

If they were too weak to fight off death, they could seek to lodge their immortal spirit in a new womb, to be born again. A lengthy guide to finding the right womb in the liminal landscape between death and rebirth read: “If you see large houses and high buildings, these are dragons. Thatched shacks are camels and mules. Wool-covered carts are hard- and soft-shelled turtles. Boats and carts are bugs and snakes. Silk-brocaded curtains are wolves and tigers…” The alchemist must find their way through this maze of shacks and palaces to the right vessel for their rebirth. So the quest for immortality would continue, from one life to the next.