A brief history of dry ice, aka solid carbon dioxide, shows why some coronavirus vaccines will benefit from its use. 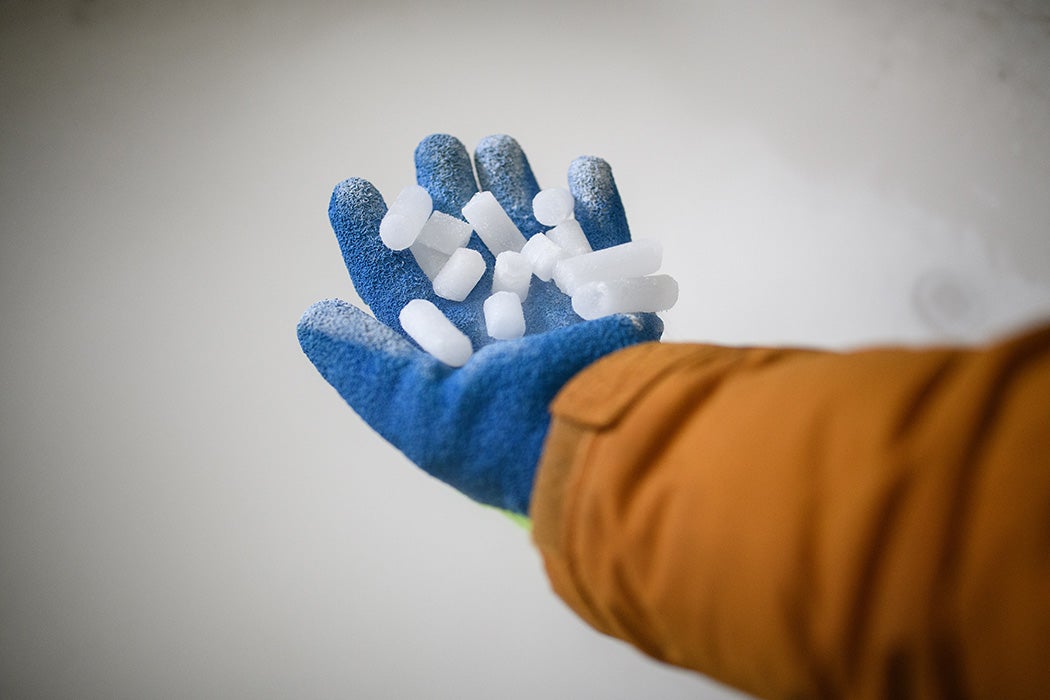 When Pfizer, which had been working on a coronavirus vaccine ever since the pandemic hit, announced that its prototype was 94 percent effective, it felt like the end was finally in sight. But while the much-awaited vaccine might indeed become available to the general population sometime in early 2021, the logistics of getting it to doctors’ offices and keeping it there are complicated. To stay potent, the Pfizer vaccine must be kept at very low temperatures, far below what most modern medicines require.

Most vaccines we get as children—hepatitis; polio; the measles, mumps, and rubella trio; and diphtheria, tetanus, and pertussis—last well at regular refrigerator temperatures, 35–46 degrees Fahrenheit. The vaccine against the varicella-zoster virus, which causes chicken pox and shingles, needs a freezer—it must be kept at positive 5 degrees Fahrenheit. These vaccines typically work by exposing the recipient either to dead pathogens or to live but attenuated pathogens that can replicate in the body but can’t get out of control.

The vaccine must be stored at negative 94 degrees Fahrenheit, a temperature that requires specialized freezers, not available at most doctors’ offices.

Pfizer’s creation is a new type of vaccine. Called an mRNA, or a messenger RNA vaccine, it delivers a snippet of the coronavirus’s genetic code into human cells. Using this snippet, human cells produce the coronavirus’s spike proteins, which the body recognizes as foreign. That triggers an immune response, generating antibodies to the coronavirus. The vaccine must be stored at negative 94 degrees Fahrenheit, a temperature that requires specialized freezers, not available at most doctors’ offices and expensive for many small providers. And that’s where dry ice comes in.

Dry ice may look white and similar to frozen water, but it’s not regular ice. It is a solid form of carbon dioxide, which freezes at a much lower point: negative 109 degrees Fahrenheit. French scientist Adrien-Jean-Pierre Thilorier was the first person to convert carbon dioxide into its solid form in 1835, using a compressor machine of his own invention. Thilorier published five major papers about his discovery: one describing a pump for compressing gas, for which he received the Montyon prize in mechanics; two on liquid carbon dioxide; and two more on the gas’s solid state. His discovery was reported to the French Academy of Sciences, published in the academy’s scientific journal Comptes Rendus, and reprinted widely in France, England, Germany, and the United States. British scientist Michael Faraday, who repeated similar experiments a few years later, said that “the solidification of carbonic acid by […] Thilorier is one of the most beautiful experimental results of modern times.”

In the 1920s, the food refrigeration industry turned to solid carbon dioxide to transport and store various food items because of its superiority to regular ice. As it melts, it turns straight into its gaseous form, skipping the messy liquid state—hence the name “dry” ice. It neither leaks nor makes things wet, so it can be loaded into cardboard containers to transport various perishable goods by train and boat, without dealing with leaks or spoilage. “Carloads of frozen fish can be shipped by rail on a five days’ journey without re-icing and without thawing,” reported a 1927 Scientific American article. “So perishable a commodity as ice cream can be economically transported from New York and Philadelphia to the warm climate of Cuba.” The article also explained that as frozen carbon dioxide melts into gas, the vapors envelop the solid chunks in an insulating blanket, which slows down the melting process, making long-term refrigeration possible. It was also easy to make by freezing and compressing the gas. “Tons of this snow are made and used every day,” the article noted.

Now dry ice could once again save the day, allowing smaller clinics to store vaccines for two weeks without buying expensive freezers. Pfizer’s special thermal shippers that will deliver vaccines can also serve as temporary storage units for fifteen days—as long as they are refilled with dry ice. Not every company’s coronavirus vaccine will need ultralow temperatures—Moderna’s mRNA vaccine remains stable at standard refrigerator temperatures of 36–46 degrees Fahrenheit. But the global demand will be enormous: Inoculating entire populations, with some vaccines administered using two shots, will require billions of doses. So any vaccine, including those needing ultralow temperatures, will be very much needed—and dry ice will keep them cold.

Four different ways researchers use the virus's own structure to train our immune systems to exterminate it.