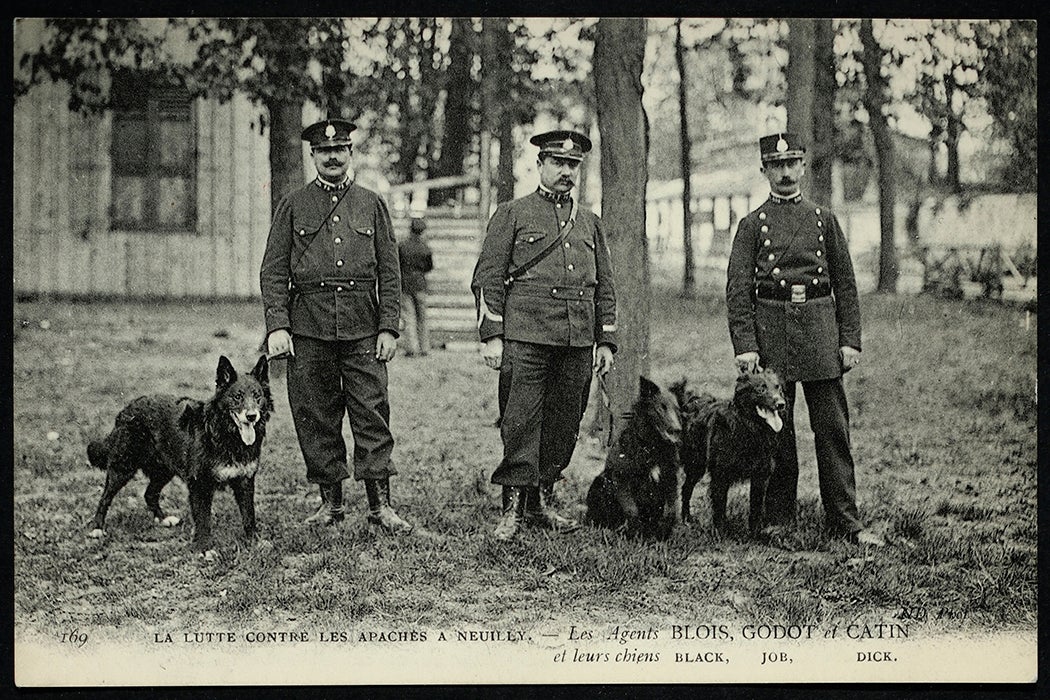 Police dogs have many roles in modern police departments, including biting and holding suspects, tracking missing people, and acting as great public relations agents with the elementary-school set. And, as historian Chris Pearson writes, dogs have been part of modern policing since the nineteenth century.

In the US, dogs were part of slave patrols that predated police departments, and “bloodhounds” were used for tracking in various places in the nineteenth century. In the 1870s, British authorities began employing dogs to hunt down “social vermin,” while Belgium may have been the first to adopt the use of dogs in policing on a large scale. In the 1890s, facing a shortfall in officers, Ghent’s police turned to Belgian sheepdogs for assistance. Soon, the idea of canine partners swept across cities and towns in Europe, the US, and across the colonized world.

They called the unemployed groups of young people who were said to roam the city, threatening civilization, “Apache gangs.”

Pearson focuses on the use of dogs by Paris police at the opening of the twentieth century. At the time, many Parisians were obsessed with stories of urban crime that fueled newspapers and novels. Drawing on the (racist colonial) myths of the American Wild West, they called the unemployed groups of young people who were said to roam the city, threatening civilization, “Apache gangs.”

Some claimed that city-dwellers, particularly the bourgeois, had lost the physical strength and keen senses needed to defend themselves against such fiendish gangs. Dogs, however, still possessed these traits and could be trained to fight supposedly menacing criminals.

Police dogs fascinated Parisians. The Union of Guard and Police Dog Enthusiasts in France, founded in 1910, held shows during which dogs were judged for traits such as intelligence, courage, and “love of work.” The shows particularly impressed one journalist, who wrote that dogs possessed a “love of property and a hatred for bandits” and predicted that the future “belongs to dogs.”

Dog training manuals called for trainers to use kindness and love, advocating “caresses” rather than “the whip.” Violence, they warned, would turn a dog into a “slave that seemed obedient” rather than a “loyal companion” who would “share danger and sacrifice themselves.” Yet, of course, part of the dogs’ jobs was doing violence of their own.

“The police dog needed to bite anyone immediately on its master’s command, even if the dog knew that person well and had previously enjoyed their company,” Pearson writes.

The dogs didn’t always perform as expected. By one contemporary report, one police dog spent his time on patrol chasing cats, catching 106 of them in a single year. And one newspaper reporter was alarmed to find that the dog he was profiling mistook him for a gang member, barking at him and straining at the leash. Police responded to concerns about rogue police dogs by using muzzles, removing them only when they were in pursuit of a “known criminal.”

The number of dogs serving the Paris police peaked at 145 in 1911 but soon dropped, with police dogs falling out of use entirely in the city after World War I. The Parisian police dog reappeared on patrol again only in the 1950s; a national training center wasn’t established until 1965. While it may have seemed to some that the future “belongs to dogs,” the disappearance and reappearance of police dogs in Paris suggests that this prophecy could easily have remained unfulfilled.