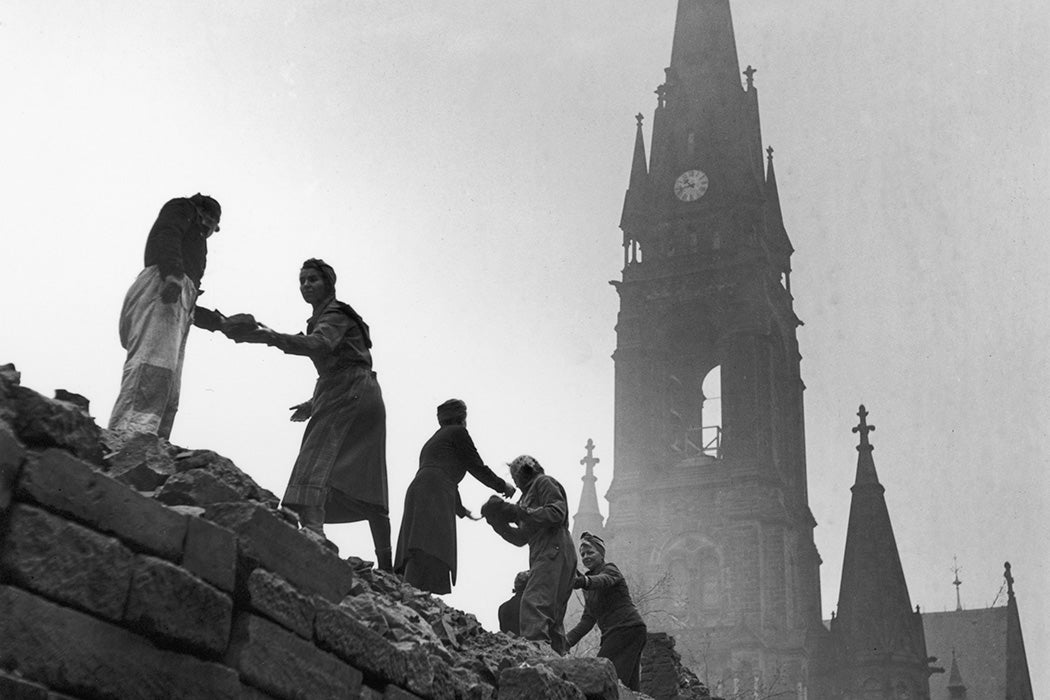 Women form a human chain to carry bricks used in the reconstruction of Dresden, March 1946, after allied bombing had destroyed the city in February 1945.
Getty
By: Erin Blakemore
3 minutes
Share Tweet Email Print

The Allied bombings against Nazi Germany were designed to destroy civilian morale. But did they? Historian Katrin Schreiter found answers in a trove of interviews that reveal the ways air raids challenged Germans—and clues as to why they didn’t surrender until the bitter end.

Schreiter delved into 170 civilian interviews gathered in Darmstadt by Germany’s American occupiers in the immediate aftermath of World War II. The interviews, which were designed to assess the results of the Allied bombing campaign throughout the war, capture a nation in shambles. By the end of the war, 305,000 Germans had died because of the bombings, with 1.8 million homes destroyed.

September 11 was referred to as “Brandnacht” (fire night) in Darmstadt.

In Darmstadt, a city of 110,000, the effects were similar to those of other German cities. Although the city had escaped destruction for much of the war, it was randomly chosen as the proving ground for a new Allied carpet-bombing technique in September 1944. The raid brought a deadly firestorm, pulverizing 78 percent of Darmstadt’s buildings and killing over 8,000 of its residents. September 11 was referred to as “Brandnacht” (fire night) in Darmstadt.

The interviews show a populace that downplayed the danger of attack for years. Since the city wasn’t seen as an attractive Allied target, the government didn’t invest in enough public shelters. Most residents waited out the bombs in their own cellars.

Darmstadt was largely a city of women, who volunteered for fire brigade jobs and participated in Nazi-organized social welfare groups. The absence of men and the demands of war resulted in more agency over their daily lives. Women whose husbands were at the front had to make their own decisions for their families and care for their elders. “Such role reversals,” Schreiter writes, “constituted a major shift in the generational and patriarchal structure of the German family.”

On the fire night, Darmstadters took to their cellars. But many perished, and all suffered. “None of them had been psychologically braced for the things they saw,” Schreiter writes. Unable to fight the fires that came in the bombs’ wake, they watched as their city burned to the ground.

That sense of helplessness underscored changing gender roles. Older men, many of whom had served in the last world war, reported feeling responsible for others’ survival but unable to help. Unprepared for a more modern kind of war and paralyzed by their inability to protect women and children, these men felt powerless. In a society where masculinity and combat were intertwined, men who had once defended their country found themselves defenseless.

Women were just as helpless as the men. But after the September 11 raid, Schreiter finds, they reported feeling numb, even fearless. Weary of war and angry with Germany’s unsuccessful tactics, they attempted to help others, even in the face of homelessness and deprivation. Ultimately, the bombs forced women into a self-sufficiency that would come to its full fruition at the end of the war.

The Allies’ goal had been to wreck the German economy and undermine morale, eroding support for the Nazis and leading Germans to question their leaders. Ultimately, writes Schreiter, it failed. The bombardments forced Darmstadters to rely on one another all the more, fortifying communities that helped them keep living in the face of the unthinkable. The bombs may have destroyed Germany, but they did not destroy German morale. 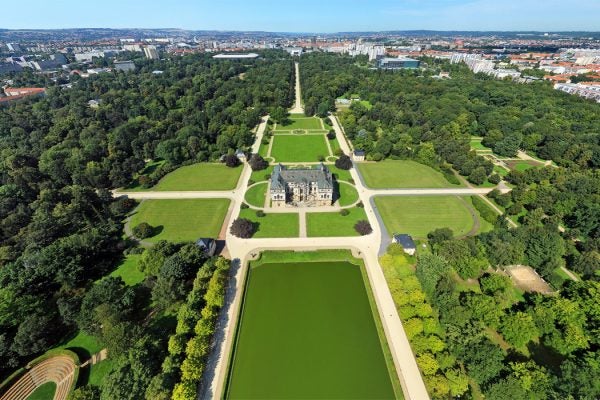 The cities of Dresden and Hamburg saw their green spaces decimated by WWII, but each city grew back its trees in a very different way.