The Creepy “Blood Falls” of Antarctica

How Antarctica’s “Blood Falls” were discovered. 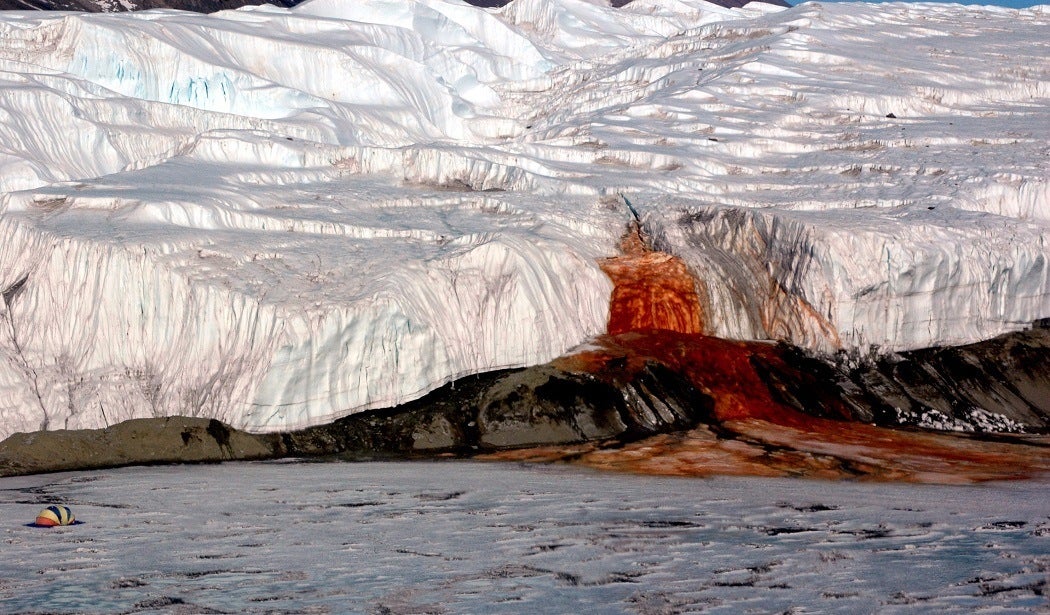 For weird places on Earth, it is hard to top Antarctica’s blood falls. The terminus of the Taylor Glacier, deep in Antarctica’s frigid and inhospitable Dry Valleys region, pours out a five-story waterfall that looks suspiciously like blood. Recently, the source of the drip was identified, and it’s amazing: a network of rivers and lakes deep underneath the glaciers themselves.

A close look at these bizarre waterbodies and the microscopic life they contain may give insight into some of the extremes of life on Earth — even how life might appear on other planets.

The blood falls were discovered in 1962 by Robert Black and Thomas Berg, geologists from the University of Wisconsin. Black and Berg were exploring the Taylor Valley when they noticed a “striking reddish-yellow” ice cone at the glacier’s terminus. Lacking access to sophisticated remote sensing technology, the two scientists tried to trace the source the only way possible, by following the colorful flow back to its source.

Expecting to find ice-melt or a river, they were shocked to discover that the falls had no source. The red water simply emerged from beneath the ice. They were further shocked when water samples revealed that the discharge was composed of hypersaline brine.

But where did it come from? The explorers compared it to sea water and determined that the brine discharge could not be ocean spray carried by the wind. They immediately recognized the significance of their discovery: a large salt source was present underneath an Antarctic Glacier with no apparent cause. The flow might even have begun shortly before their visit, according to observations from Navy pilots, so that brine might have been completely sealed under the Taylor glacier for millennia until merely a couple of months before Berg and Black showed up — a truly amazing coincidence.

The riddle of the brine was not solved until 2005, when an expedition drilled a core under the thick ice at nearby Lake Vida. The glacial cores, when retrieved, were coated in brine at the bottom. Further analysis revealed that the brine contained a thriving microbial community, in anoxic (low or no oxygen) conditions at -13° C.

The bacteria engages in an oxidation reaction with the rock, resulting in the color of the blood falls where the brine is exposed to atmosphere. The entire process takes place in complete darkness, so these bacteria grow and thrive on geochemical processes since photosynthesis is out of the question. These processes, as well as some non-biological reactions, are responsible for much of the salt and mineral content of the brine.

It took 43 years, but a chance discovery in 1962 led to the discovery of one of the most extreme and bizarre ecosystems on Earth, not to mention the striking appearance of the area. Life can thrive anywhere, it seems, given a chance.

Saline Discharge from Taylor Glacier, Victoria Land, Antarctica
By: Robert F. Black, M. L. Jackson and Thomas E. Berg
The Journal of Geology, Vol. 73, No. 1 (Jan., 1965), pp. 175-181
University of Chicago Press
Microbial life at — 13 °C in the brine of an ice-sealed Antarctic lake
By: Kaelin M. Cawley et. al.
Proceedings of the National Academy of Sciences of the United States of America, Vol. 109, No. 50 (December 11, 2012
National Academy of Sciences 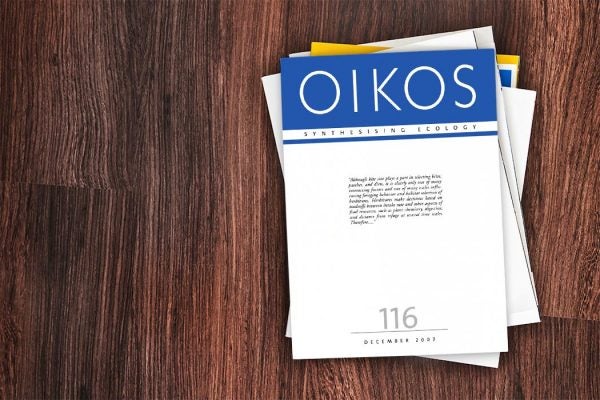 The peer-reviewed ecological journal Oikos has nothing to do with the popular brand of Greek yogurt that shares its name.