Who needs black clothing to fight fascism when red, white, and blue will do quite nicely? 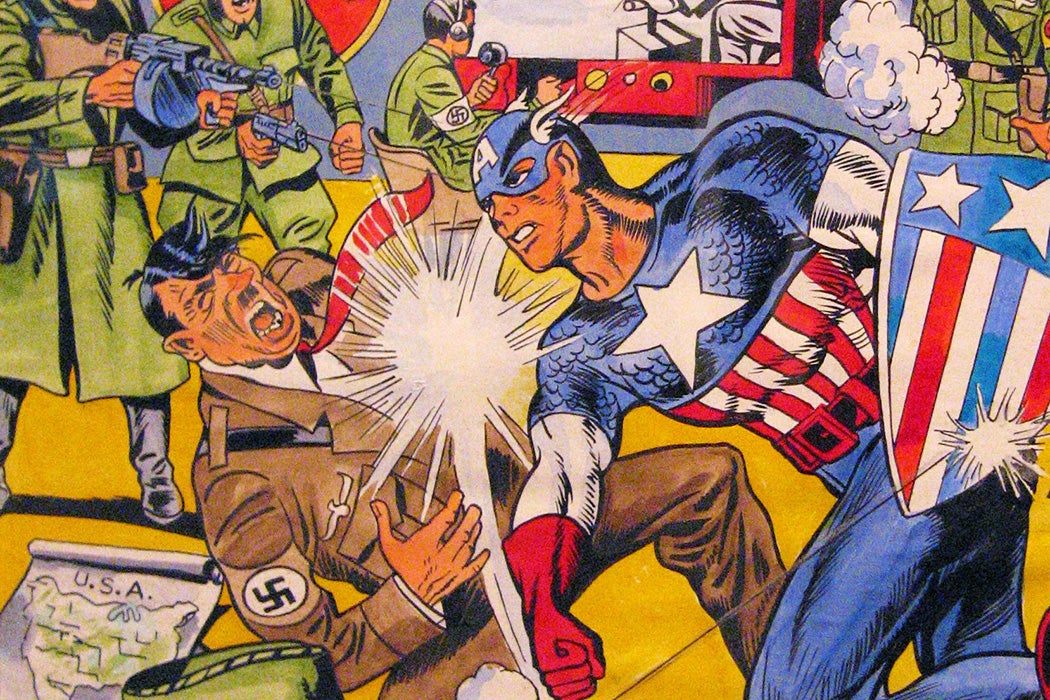 Captain America and Wonder Woman both premiered in comic books in 1941 as anti-fascist superheroes. On the cover of the first issue of Captain America, the hero in red, white, and blue clocked Adolf Hitler in the mustache. In Wonder Woman’s debut (All Star Comics #8), she rescues an American spy and captures a Japanese one. Both of these comics appeared before the Japanese attack on Pearl Harbor on December 7, 1941, so the comics were at war before the country. During the war years, these superheroes didn’t let up their fight.

“To fight ‘the good fight’ Captain America and Wonder Woman appealed to Americans’ sense of patriotism and service through patriotic appeals to the audience to fight on behalf of the American nation-state,” writes scholar Mia Sostaric.

The myth of World War II as the “Good War” elides the country’s prior ambivalence.

Before Pearl Harbor, Americans were deeply divided about participating in yet another European conflict. As Sostaric notes, the myth of World War II as the “Good War” elides the country’s prior ambivalence. There were pacifists and non-interventionists, isolationist “America Firsters,” and even outright pro-Nazis in the antiwar camp. President Franklin D. Roosevelt, who clearly favored the Allies (Britain, France, Russia), had to be cautious about angering this politically significant bloc.

But Roosevelt and his administration did try to move public opinion both before and after Pearl Harbor. In addition to official propaganda, the state also found allies in the private sector. Popular culture was a fruitful way to get the patriotic message across.

Plenty of artists and producers didn’t have to be asked. For Joe Simon and Jack Kirby, the originators of Captain America, Hitler was “a natural foe for a superhero,” writes Sostaric. Beyond the Nazi punching, Captain America Comics “primarily used political obligations, such as the defense of democracy, to encourage citizens to contribute to the war effort.”

Psychologist William Moulton Marston created Wonder Woman under the pen name Charles Moulton for DC Comics. Influenced by the feminism of the 1910s and 1920s, he specifically created Wonder Woman to “help inspire and promote women’s political, economic, and social advancement.” The war did a lot of that, too, as women filled roles traditionally occupied by men in offices and factories during the “manpower” shortage. Wonder Woman’s alter ego, Diana Prince, was a secretary in the U.S. Army. Wonder Woman was costumed in an American flag–inspired outfit and was “a patriotic role model to American readers.” Captain America also literally wore the flag.

Both of these superhero books fundraised for the war effort, supported wartime recycling campaigns, and carried advertisements for volunteers. Wonder Woman, whose fan club was called the Junior Justice Society of America, “encouraged women to build their physical strength” by joining the Women’s Army Auxiliary Corps (better known as WAACs) or the Women’s Naval Reserve, also known as WAVES (Women Accepted for Volunteer Emergency Service). Wonder Woman doubled down on inspiring girls and young women through the stories they told, activities like “victory puzzles,” and even the advertisements. A 1945 plea for Army nurses urged readers to “show this to your mother, your big sisters, and your aunts!”

“Never before in our history has Uncle Sam needed the wholehearted support of every man, woman, and child,” went the appeal of the Junior Justice Society of America. Uncle Sam wanted you, and so did Captain America and Wonder Woman.