The mighty brontosaurus might be real after all, according to new analysis. Brontosaurus was originally named in the late 19th century by the flamboyant paleontologist Othniel Marsh. Marsh found bones from a huge, long-necked dinosaur (Sauropod) and named it Apatosaurus. Shortly thereafter, he found another one, and named it Brontosaurus.

In 1905, Elmer Riggs determined that Marsh’s Brontosaurus was really just another Apatosaurus. Brontosaurus thus faded away from the technical literature, but lived on in the popular imagination. It begs the question: how skilled are we at identifying new species?

Only about half of newly discovered dinosaurs species are confirmed.

Brontosaurus is the most famous example, but many new species are eventually retracted after further study. In fact, the accuracy rate for correctly naming new dinosaurs hovers around 50%, meaning that only about 50% of new finds are upheld by review. Earlier researchers, particularly Othniel Marsh, were especially unlikely to be accurate. Marsh identified 80 new dinosaur species, of which 23, or 29%, are still deemed valid. Marsh’s spirit can, however, take some comfort in the knowledge that his professional arch-rival, Edward Cope, had the dreadful rate of 9% accuracy.

Many of these names result from accidentally duplicating specimens, as in the case of the Brontosaurus, or through outright errors. The error rate seems to have decreased through time due to increased caution in modern paleontologists. It is rare these days to use radically incomplete skeletons to identify new Genera or species. The best way to be certain that a fossil is something new is to find it in a completely new or unexplored area. Marsh and other early American paleontologists worked mostly in the American west, where overlap, interspersed with a desire to one-up each other, led to frequent duplicate errors in identification.

The new model suggests that Brontosaurus may in fact be distinct from Apatosaurus, based on characteristics of their respective necks. The new research is also not likely to go unchallenged, as new models and algorithms are routinely developed. Paleontologists will digest this model’s merits and then decide if Brontosaurus truly deserves its own name or whether it should be relegated back to pop culture oblivion.

As for Marsh himself, there was one more indignity in store. His Brontosaurus had no head, so he chose one he found some distance away. It belonged to a diplodocus. Marsh had picked the wrong one.

How to Find a Dinosaur, and the Role of Synonymy in Biodiversity Studies
By: Michael J. Benton
Paleobiology, Vol. 34, No. 4 (Fall, 2008), pp. 516-533
Paleontological Society
Description of the Palate and Lower Jaw of the Sauropod Dinosaur Diplodocus (Reptilia:Saurischia) with Remarks on the Nature of the Skull of Apatosaurus
By: John S. McIntosh and David S. Berman
Journal of Paleontology, Vol. 49, No. 1 (Jan., 1975), pp. 187-199
SEPM Society for Sedimentary Geology 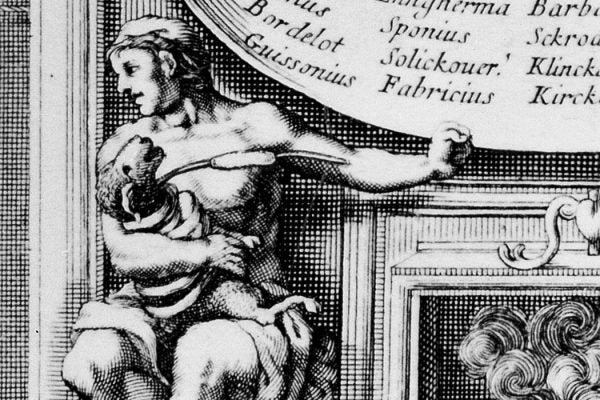 The world’s first experiments with blood transfusion occurred in the mid-1660s in England. The procedure, carried out between dogs, was gruesome.