At South Africa’s Constitutional Court, a Democracy Brick by Brick

The themes of truth and reconciliation echo throughout the Court’s design, evoking the democratic values of post-apartheid South Africa. 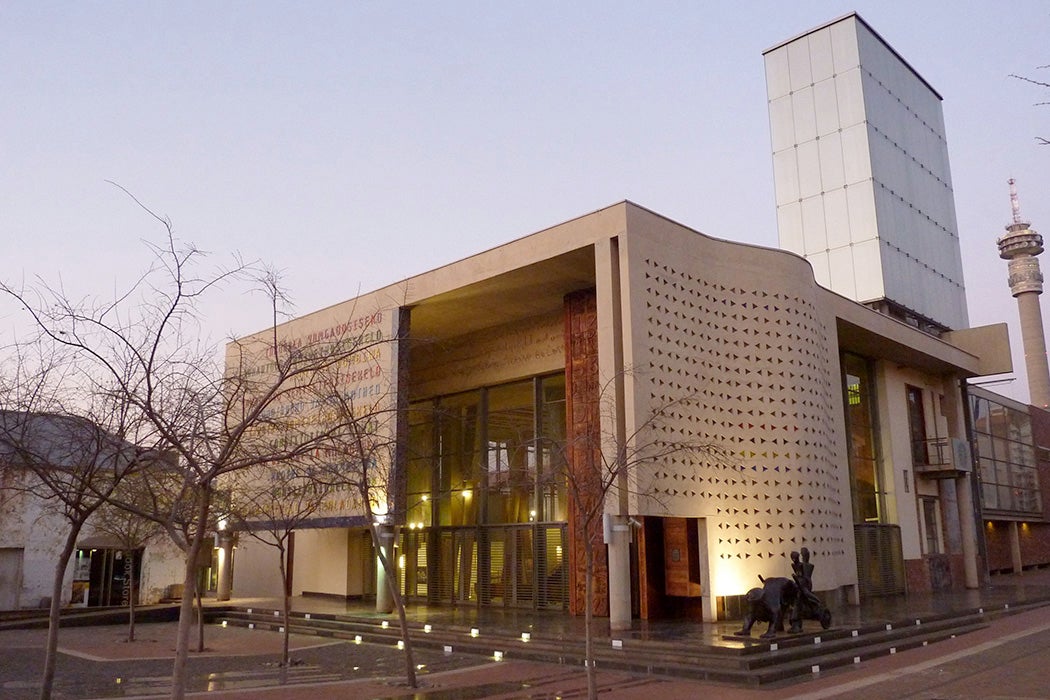 Whenever I see The Blue Dress, one of the signature pieces in the art collection lining the hallways of South Africa’s Constitutional Court, it evokes a feeling of anger, of generational trauma. Stitched together from fragments of discarded blue plastic bags, the piece represents the story of Phila Ndwandwe, who was captured by apartheid police and tortured in an attempt to force her to provide information on the resistance movement. She did not betray her comrades. She was kept naked for days before being shot to death. When her body was found, the blue plastic shopping bag that she had wrapped around her pelvis to preserve some of her privacy was still in place. How do we, as South Africans, reconcile this injustice with our national attempt to forgive and move forward? How do we, as the critical sociologist Robyn Autry wrote in Contexts, “grapple with the challenges of public remembrance in the context of collective trauma[?]”

As Autry asserts, “we know that representation of such upsetting national events are routinely sanitized or abstracted to lessen their ability to evoke controversy.” But Constitution Hill, the precinct in which South Africa’s Constitutional Court is housed, is different. The themes of transformation, forgiveness, and reconciliation echo throughout the design of the space, evoking the values that allowed South Africans to move forward after the apartheid government fell and democracy rose. Dismantling systemic injustice was not just a collective nationwide effort of healing internal and external wounds, it also became a project in transforming the physical space in which we live.

The Court’s logo reflects the central theme of its design, that is, Justice under a Tree. This is a nod to the traditional cultural practices of village elders sitting under a tree, debating and deciding on the issues brought to them by community members. The sheltering branches of a tree also represent the protection of rights. In order to bring this theme to the court building, the foyer contains several large, slanted pillars, representing the slanting branches of trees. The skylight allows sunlight to enter the court in a manner similar to that of light falling through leaves. The chamber’s carpet continues to evoke the idea of sunlight coming through trees, casting shadows on the ground.

The Court is the “upper guardian” of the Constitution and usually operates as an appellate court (in exceptional cases, litigants are allowed direct access to the court, bypassing the lower courts where an important constitutional issue is at stake). There are eleven judges, and each judge sits behind a podium covered by cow hide from Nguni cattle. The hides represent traditional royal courts and are also representative of the individuality of each judge, since each hide is unique. The judges sit at eye level to the legal practitioners presenting a case. However, the public, sitting in an amphitheatre-like gallery, are often sitting higher than the judges. This symbolises the relationship between judges and the public, in that the judges are meant to serve the nation.

The glass is meant to emphasise transparency, and to remind the judges to be down to earth.

The Court’s design is vastly different from many of South Africa’s other courts, which are far more austere and uninviting. There are glass panels behind the judges, nicknamed the “ribbon of light window:” the window is at eye level to the judges, but at ground level from the outside. The glass is meant to emphasise transparency, and to remind the judges to be down to earth. These features of the court are just a few of many symbolic aspects of the design—an effort to use architecture and physical materials to represent democratic ideals and values.

While the Constitution Hill precinct is practical and in use for court matters, it is also a cultural and heritage site. As the urban and human geographers Christian and Jayne Rogerson note in Urbani Izziv, the City of Johannesburg has marketed it to domestic and international tourists. Apart from the Court, part of the old “Number Four” prison remains, and functions as a heritage site. The Constitution Hill precinct was briefly (for about four years) used as a military fort, but was converted into a racially segregated prison under the apartheid government. While not as notorious as Robben Island, the prison housed political prisoners, such as Nelson Mandela and Mahatma Gandhi.

Autry writes that, even during the apartheid era, after the prison was closed in 1983, the apartheid government tried to regenerate the site for tourist revenue, emphasizing its military history, but these attempts failed. It was only after apartheid that the precinct got its transformational makeover, but not all changes were without controversy. Autry notes that while judges and architects proposed tearing down the awaiting-trial block to make way for the court, preservationists fought against the demolition in order to retain its integrity as a heritage site. An elegant solution was reached, in which bricks from the awaiting trial block were used in the court building, and these bricks remain exposed and rugged, as a stark reminder of our history. Autry writes that “the incorporation of the bricks into the new design ultimately added to the court’s phoenix-like image as a material symbol of the democratic triumph over authoritarian rule, expressed by situating the Constitutional Court amidst the ruins of the Old Fort.”

Apart from the heritage site, and the Court, offices were built to house various legal and human rights organizations. Function aside, one of the most notable aspects of the precinct is the artwork. The Court initially began with a meagre art budget of 10,000 rand, to be used by one of the first Constitutional Court judges to decorate the court. After the judge used the entire budget on one piece, interest in the Court provoked a slew of donations, with some iconic pieces now housed in the Court hallways. The Blue Dress is just one such piece, along with other paintings, photos, sculptures, and tapestries.

The historian Sarah Pharaon and her co-authors posit in The Public Historian that sites like Constitution Hill are safe containers for “dangerous memories”. They call Constitution Hill a “site of conscience.” This means that it is a place that allows for the remembrance of “past struggles for justice” while “addressing their contemporary legacies”. Such sites “foster public dialogue on social issues to build lasting cultures of human rights.”

However, while it is clear, as Autry writes, that “a delicate balance of old and new animates the site,” she goes on to note that it has become “a new type of public space, where protests, rallies and vigils are staged as residents make demands on the democratic state.” She writes that, while this type of civic engagement is seldom anticipated by politicians, they rarely endorse it, “because it can facilitate alternative efforts to mobilize collective memories of the past for political aims that challenge existing authority.” For example, the art and architecture scholar Marilyn Martin writes in African Arts about efforts in 2010 by the then-Minister of Arts and Culture to censor an exhibition at Constitution Hill because she claimed the art was “pornographic” and “immoral.” This attempt to suppress freedom of expression at the very site where human rights are meant to be upheld highlights the tensions and struggles still faced by South Africa’s relatively young democracy.

Apartheid laws included strict regulations on where people of different races were allowed to live. Dismantling the apartheid mindset was not only about ideological shifts, but also about disrupting the legacy of the physical segregation that the apartheid regime created. The legacy of violent racial segregation has not yet faded, and some of our elders can relay first-hand experiences of the indignities suffered under the brutal apartheid regime. Our leaders chose to forge a way forward through reconciliation. With the promise of a Rainbow Nation unified under a democratically elected visionary president—namely, Nelson Mandela—we collectively chose the high road and charted a difficult path to forgiveness. A Truth and Reconciliation Commission was set up to allow for full and frank disclosure of torturous acts committed by agents of the apartheid state. Perpetrators could apply for amnesty. Victims could seek closure.

But still, looking at The Blue Dress, I am torn. The trauma of our collective past still haunts us, well represented by a heroic woman trying to hold on to her sense of self with a scrap of blue plastic bag. South Africa teetered on the precipice of civil war, and a choice had to be made: work toward reconciliation or exact revenge for the monstrous acts committed in the name of apartheid.

The heroes of the anti-apartheid struggle gave so much to our current democracy, yet our society is far from an idealized Rainbow Nation. Xenophobic attacks against foreigners, for instance, are a blight on our nascent democratic history. Racially fuelled looting ravaged parts of our country in early 2021. Economic inequality is rife. The Court precinct reminds us that there is hope and that there are still those fighting for a better South Africa. Momentous judgments fill the court’s jurisprudence, with cases ranging from the outlawing of the death penalty, aligning customary inheritance laws with the Constitution, and the duty of police to prevent sexual violence. The phrase at the top of the Ladder of Justice artwork, at the entrance to the inner court, evokes the revolutionary spirit in which the Court was built, on which post-apartheid society is built: A luta continua (the struggle continues). 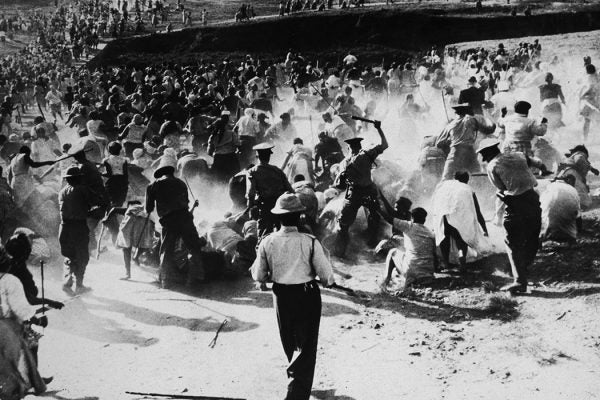