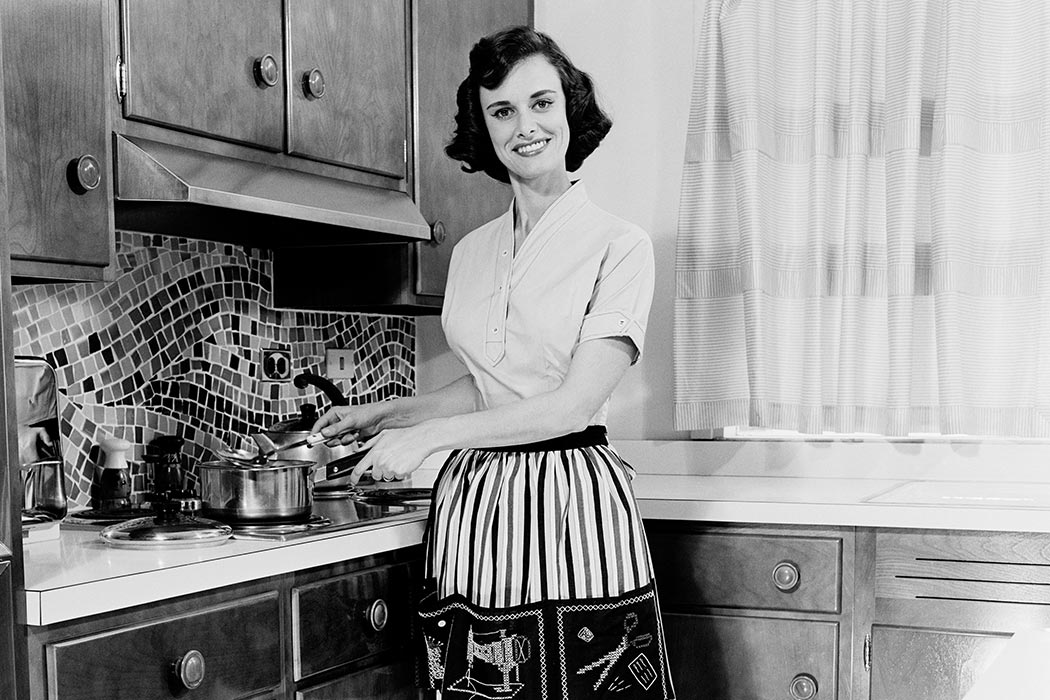 Advertising tells us a lot about the way companies want consumers to look at their products. A car might be sold as fun to drive, or safe and reliable, or flashy and envy-inspiring. So what do ads for household products—vacuums and kitchen appliances and cleaning sprays—tell us about women’s work in the home? In a 1990 paper for Gender and Society, Bonnie J. Fox explored that question, analyzing ads that appeared between 1909 and 1980 in Ladies Home Journal, the most widely read women’s magazine for much of the twentieth century.

The idea that household technology would liberate women from work was never a predominant theme in the ads. Some ads did promise a vacuum that “does all my work” or a sewing machine that relieves “weariness and exhaustion.” But this theme was present in only 13 to 21 percent of the ads in each of the periods Fox studied from 1909 through 1950. In the later periods, between 1969 and 1980, it figured in only 5 to 6 percent.

One of the most common themes, found in around a third of the ads through the decades, was the quality of housekeeping women could perform with new technologies. A 1920 ad promised “perfect results” in making jams and jellies. There were many appeals to scientific standards for cleaning, like one product that “gets all the dirt, all the impurities.”

Ads that focused simply on characteristics of the product were similarly common. For example, one 1949 ad described stove burner technology as “the greatest achievement in Gas Cookery in America.”

Fox situates the ads in the context of a nation in which women were becoming less obvious contributors to their households’ economic productivity. In the early years of the twentieth century, it became less and less likely that wives would keep livestock, take in boarders, or otherwise earn money. Meanwhile, employment of domestic servants in upper- and middle-class households was in decline, and mothers also lost the assistance of their children as mandatory schooling expanded nationwide.

All this provided good reason for housewives to see their status declining. Fox argued that, by focusing on high standards and scientifically proven modern tools, advertisers presented an answer to this problem: defining housework as serious work. In the 1960s and ‘70s, when ads for products like cigarettes were borrowing the language of “liberation” from the feminist movement, it was particularly rare for household products to promise an escape from drudgery. Fox argued that a message like that would have undermined the message that cleaning and cooking was a real job.

Drawing on other scholars’ work, Fox noted that this fit in with the way women actually did housework in the twentieth century. Labor-saving devices did not lead to housewives cutting back their hours of work at home. Instead, they took on chores previously done by other members of the household, or raised their standards for cleanliness. The only time women actually do less housework seems to be when they get paying jobs. In other words, it takes a new kind of “serious work” to displace the full-time job of housework.