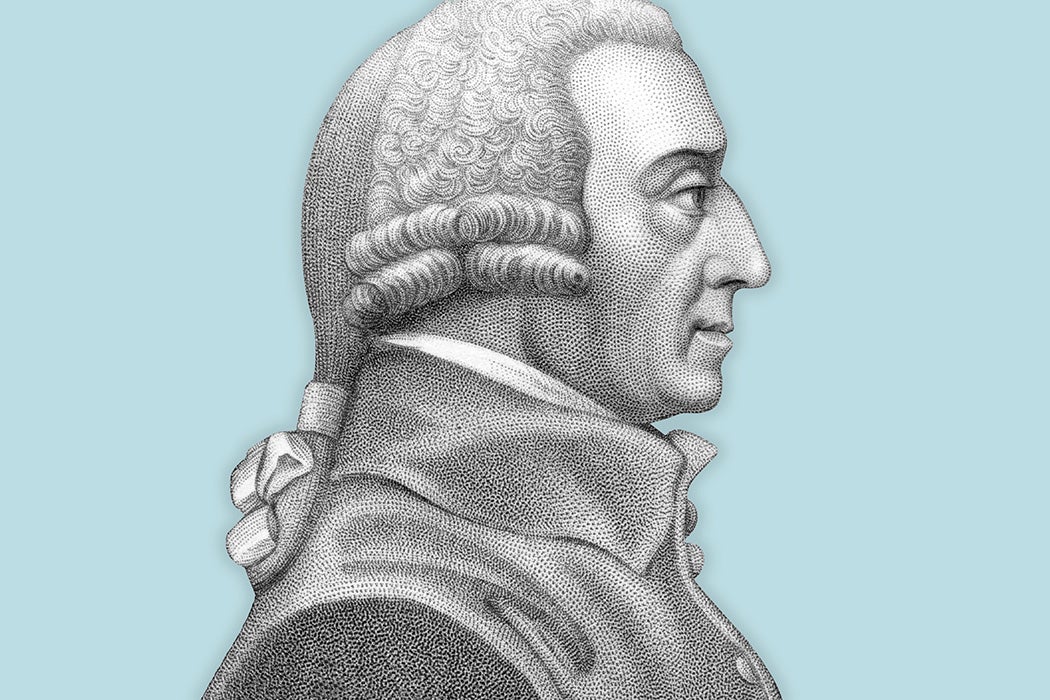 “No society can surely be flourishing or happy, of which the far greater part of the members are poor and miserable. It is but equity, besides, that they who feed, cloath and lodge the whole body of people, should have such a share of the produce of their own labour as to be themselves tolerably well fed and lodged.”

So wrote Adam Smith, who is a lot like Karl Marx, in that both are more referenced than actually read. Their writings are transmuted into selected cliches, simplified, stereotyped, or just plain misinterpreted. Both have been turned into cartoons by their detractors, obviously, but also by their fans.

When he died in 1790, Smith was largely reviled in Britain by the mainstream as a friend of French philosophy.

Author of the classic but infrequently read The Wealth of Nations (1776), Smith is something of a father to capitalism. He’s therefore taken to be an arch conservative. Yet when he died in 1790, Smith was largely reviled in Britain by the mainstream as a friend of French philosophy, his work an inspiration for the French Revolution.

“Smith’s death was the subject of rather little interest in England,” writes scholar Emma Rothschild. The Times dismissed Smith by parroting Edmund Burke’s criticism that he was a disciple of the demonically atheistic Voltaire. Meanwhile, the French piled up honors on Smith when news of his death reached them.

Smith actually “wrote nothing that was concerned with the revolutionary events in France,” even though he seems to have paid close attention to them. It was his ideas, his “new principles” of political economy and political justice, that were taken up so eagerly across the Channel.

Smith also had a reputation for the promotion of “unseemly popular discussion.” Soon after his death, the repressive climate in Britain considered the influencing of public opinion to be seditious. Sedition trials in Scotland in 1793 condemned people to fourteen years transportation for what Rothschild describes as “words which were ominously close to Smith’s.”

Anything that smacked of a French connection was suspect. Dugald Stewart, Smith’s first biographer, was caught up in the reactionary machinery. A “modest little reference to Condorcet” in one of Stewart’s works brought down the fury of Scottish Law Lords who demanded a retraction of “every sentiment you had ever entertained, and every word you had ever uttered, in favour of doctrines which had led to so giant a mischief [i.e., the French Revolution].”

Thus it was a chastened Stewart—a contemporary said he was “sincerely under the influence of fear”—who was instrumental in cementing Smith’s reputation as a conservative philosopher. Rothschild argues that “Stewart’s memoir is evidence of the effort to present Smith as a conservative, more than of Smith’s conservatism.”

“The real Smith, according to Stewart, was the sober public philosopher, and not the private man who spoke to friends about religious prejudice, Voltaire, and the madness of modern wars.”

Stewart also skillfully redefined Smith’s ideas of freedom. It was fine for political economy—which would eventually become economics—to be concerned with the freedom of trade, commerce, industry, and property. Political freedom, on the other hand, was simply too dangerous. (Rothschild quotes Coleridge in 1798: “LIBERTY has a jacobinical sound with it.”) So economic and political freedom were fatefully divided, a notion that might well have had Smith rolling over in his grave.

“Smith’s renown as a cold-souled enemy of the poor has been justified, for almost two centuries, by reference to his presumed ‘general principles’ of scarcity and famine,” writes Rothschild, noting that these principles were only posthumously “discovered during the English food crisis of the mid 1790s.”

By 1800, Smith—once considered a friend of the poor and an enemy of the privileges of the rich—was securely in the hands of the established institutions. He was well on his way to become a saint for the right, a bête noire for the left. The complex, sometimes contradictory character of his thought was pasteurized and bottled for the powers that be.