A Feminist Vision of the Musical

Chantal Akerman’s The Eighties proves that a musical set in a mall can be a significant feminist work. 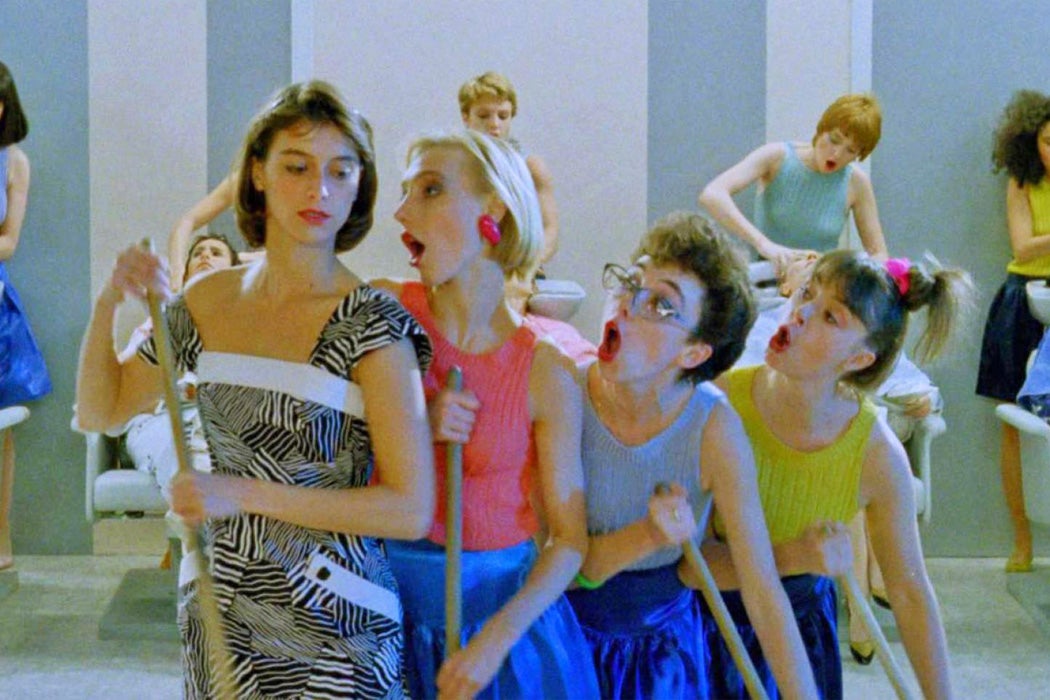 It seems like every few months, a new movie remake populates movie theaters. These reinventions often adjust stories to fit today’s trends and values. But what happens when an entire genre is “remade”?

In her piece “Shall We Dance?: Feminist Cinema Remakes the Musical,” film scholar Lucy Fischer explores some of the ways in which female filmmakers such as Chantal Akerman flip the narrative of the traditional Hollywood musical, a form traditionally dominated by male and heteronormative direction.

The female voiceover as narrator in this story offsets traditional narrative.

The movie musical is a genre in which audiences suspend belief in order to enter into a world where singing drives a story. A song often emerges from a quotidian moment, in an effort to display a character’s feelings or motivations. Gender is frequently at play. Fischer quotes film critic Rick Altman, who says that within musicals we

alternate between the male focus and the female focus, working our way through a prepackaged love story whose dynamic principle remains the difference between male and female.

Akerman’s The Eighties takes place entirely in a shopping center and follows its protagonist Jeanne as she finds herself caught up in multiple romantic entanglements. In a way, it’s a standard set-up for a musical, with a love triangle at its center. The first act of the movie features snippets of a play in rehearsal which eventually culminate into that play’s performance in the second act.

Ackerman creatively inserts herself through several stand-ins such as the rehearsal director and conductor. Fischer writes, “As though to underscore the traditional power of male discourse (both on screen and off), when the first male actor speaks he does so assertively and no directorial voice comments on his delivery.”

Fischer also explains how the setting of the shopping center parodies the dominant culture of consumerism. She notes that traditionally, women in Hollywood musicals are seen as decoration. The Eighties, however, puts women in the center, with songs and a score that reveal the characters’ emotions.

Akerman dissects the melodrama that is traditionally part of a musical, using repetition to the point of absurdity. For example, the first scene of the film features a line about grief, “At your age, grief wears off,” that is reiterated multiple times throughout. According to Fischer, “The radical use of repetition underscores the redundancy of certain cliches in the melodramatic repertoire and foregrounds their endless replay in real women’s lives.” This theme of repetition is extended into the use of multiple actors for a single role which makes it more challenging for audiences to identity a particular character.

The second act of the film finally places the previous rehearsal scenes into context for the audience as the play is performed in full. Once in context, it is clear that the play is a parody of the musical romance. As a woman sings her romantic, explicitly sexual song, it becomes literal as she begins to make love with her partner as background singers poke their heads into frame. Fischer notes the ridiculousness of these over-the-top musical sequences.

The film doubles as homage and parody to the traditional musical romances, but Akerman revises the genre with her feminist sensibilities. According to Fischer:

Through her “re-make,” Akerman also engages what literary theorist Mikhail Bakhtin describes as the rhetoric of parody, wherein “the dominant discourse is reflected as something more or less bounded, typical and characteristic of a particular era, aging, dying, ripe for change and renewal.”