Will Fish Lose Their Sense of Smell in Acidic Oceans? If a raw fish smell makes you pinch your nose, the feeling may be mutual. Fish—at least some species of salmon—aren’t fond of your body odor either. Unlike humans who don’t smell much underwater, fish actually do have rather good olfactory abilities. Fish use their sense of smell to find food, avoid predators, identify each other, spot safe habitats, and even locate spawning grounds.

In one prior experiment, scientists tested 54 different types of smells on salmon during its annual spawning migration upstream. They mixed the scents into the stream and observed the fish’s responses. Most scents didn’t produce much of a reaction from the salmon, but some, including human skin, bear paw, dog paw, and a sea lion smell, generated rather intense responses. For ten minutes after scientists mixed these scents into the water, no salmon would swim upstream. In fact, a few of them leaped backwards. The fish could tell its predators by their odors.

In more recent work, scientists found that clownfish are able to pick up the scent of tree leaves floating in the water, and use that smell to locate vegetated islands surrounded by reefs where they can find new homes. Even lab-grown juvenile clownfish were able to sniff out the rainforest vegetation added to the water, suggesting that this ability is innate to the species.

But climate change is dulling the fish’s olfactory senses, finds a new study by a joint team of three research institutions in the United Kingdom and Portugal. As the emissions of carbon dioxide increase, more of it gets dissolved in the ocean. When CO2 is absorbed by seawater, it forms carbonic acid, which makes the oceans more acidic. In the past 200 years, the ocean became 30 percent more acidic, and some sources have even larger estimates. By the end of this century, it could be 2.5 times more acidic than now. In heavily acidic water, fish has trouble picking up and identifying scents, which can compromise their survival abilities, researchers found.

The team compared the behavior of juvenile sea bass living in water at today’s carbon dioxide levels and those predicted towards the end of the century and found marked differences. “The sense of smell of sea bass was reduced by up to half in seawater that was acidified with a level of CO2 predicted for the end of the century,” said Cosima Porteus, who led the study at the University of Exeter. “Sea bass in acidic waters swam less and were less likely to respond when they encountered the smell of a predator. These fish were also more likely to ‘freeze,’ indicating anxiety.”

To understand what’s going on, the team recorded the activity in the nervous system of the fish while the creature’s nose was exposed to water with different levels of dissolved carbon dioxide. They also studied how the elevated acidity affected the genes present in the nose and the brain of the sea bass. They found that many genes involved in sensing smells and processing that information worked differently. They believe it’s because the acidified water affects how odorant molecules bind to olfactory receptors in the fish’s nose—reducing how well the creatures can distinguish various important stimuli.

Although scientists only experimented with sea bass, the processes that govern olfactory senses in aquatic species are quite similar—so other fish would likely have similar trouble. Humans rely on sea bass and other marine species as food sources, so the findings are concerning. “It is not yet known how rapidly fish will be able to overcome these problems as CO2 rises in the future,” Porteus said, but the phenomenon will certainly affect their ability to adapt. 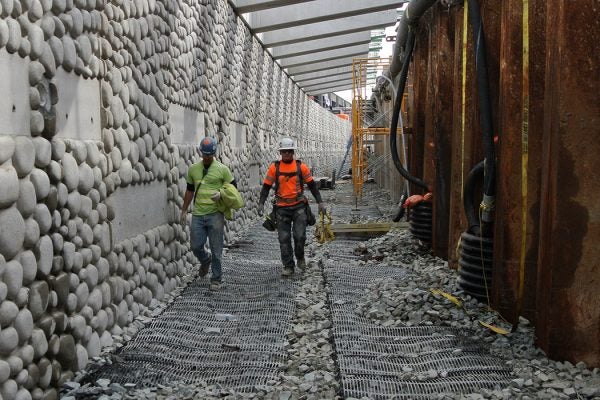 A New Way to Protect the Coast