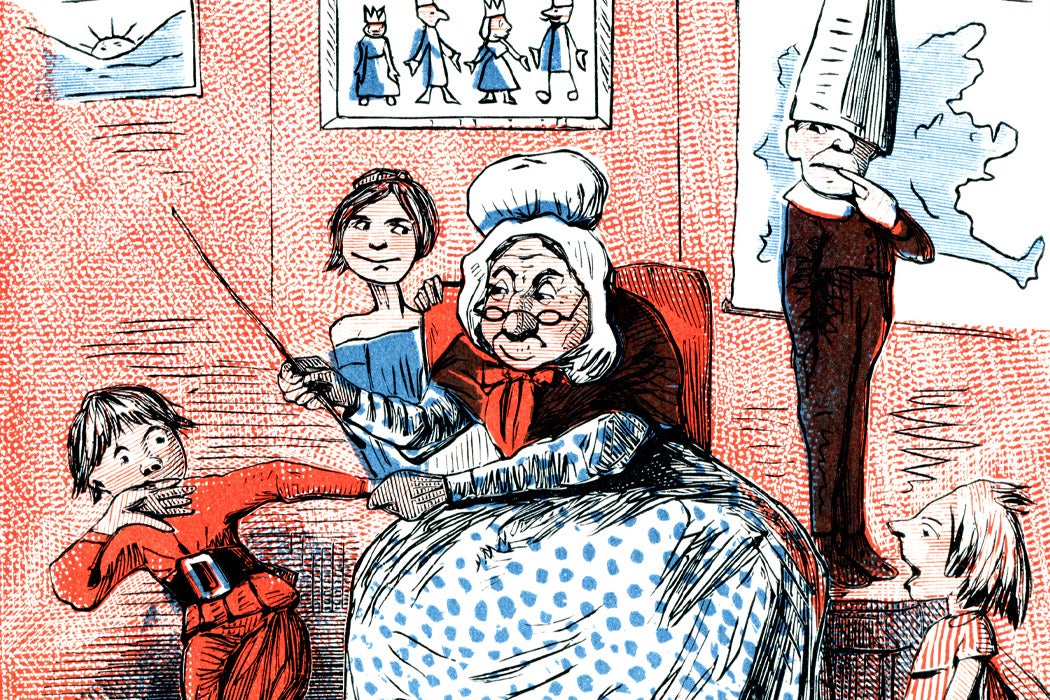 Last fall, Graham County became the final school district in North Carolina to ban corporal punishment. Although the practice remains legal in nineteen states, actually hitting kids is vanishingly rare in most public schools in the country. The phasing out of teacher-on-student violence has been a centuries-long process, as scholar Francis J. Ryan writes.

In colonial and post-revolutionary New England, hitting kids was the obvious way to keep them on-task. It was so widespread that the rhyme associated with the letter “f” in the commonly used New-England Primer was “The Idle Fool/Is whipt in School.” A Sunderland, Massachusetts schoolhouse built in 1793 had a whipping post built into its floor so that children could be tied up and flogged.

And yet, even in those days, some observers questioned harsh punishments. The Reverend Richard Mather warned schoolmasters against alienating students’ minds with “undue severity.”

Teachers would tie students’ legs to wooden shackles and make them walk around the room, or place a child in a basket suspended from the roof of the school.

The revolutionary Lancasterian system, introduced from England to America in the early nineteenth century, offered an alternative to corporal punishment. Ryan writes that the point of the system was to instill in the growing population of working-class students the obedience, promptness, regularity, and temperance that they would need to be good industrial workers. Designed to keep a class of as many as 1,000 students focused on a lesson, it used badges and prizes to encourage good behavior.

Lancasterian teachers generally avoided the rod, but they sometimes used other, weirder corporal punishments. They might place a specially designed four- to six-pound log on a student’s neck, making it difficult for them to turn their head. Other times, teachers would tie students’ legs to wooden shackles and make them walk around the room, or place a child in a basket suspended from the roof of the school.

Ryan writes that the move away from corporal punishment continued through the nineteenth century. Educational reformer Horace Mann was particularly influential in pushing for systems of rewards rather than punishment, and for meaningful learning rather than rote memorization. In the early twentieth century, the Progressive movement also championed public schools as spaces to practice democratic citizenship rather than obedience to authority.

School officials took an increasingly psychological and sociological view of their students. As one San Diego guidance counselor put it in 1944:

Corporal punishment, as a method of controlling group behavior, does not take into account sufficiently the causes of bad behavior… Does the child that “bothers” [a teacher] have enough sleep? Is he properly nourished? Are there conflicts between his mother and father in the home that result in emotional exhaustion for him?

Today, that sort of analysis is increasingly common among American educators. But, as the continuing use of the rod in some schools suggests, it hasn’t fully taken hold yet.

from Rod to Reason: Historical Perspectives on Corporal Punishment in the Public School, 1642-1994
By: Francis J. Ryan
Educational Horizons, Vol. 72, No. 2, The Challenges of Discipline: From Violence to Conflict Resolution (Winter 1994), pp. 70-77
Phi Delta Kappa International