To Be or Not to Be Hamlet

The drama of playing the famous prince. In pictures. 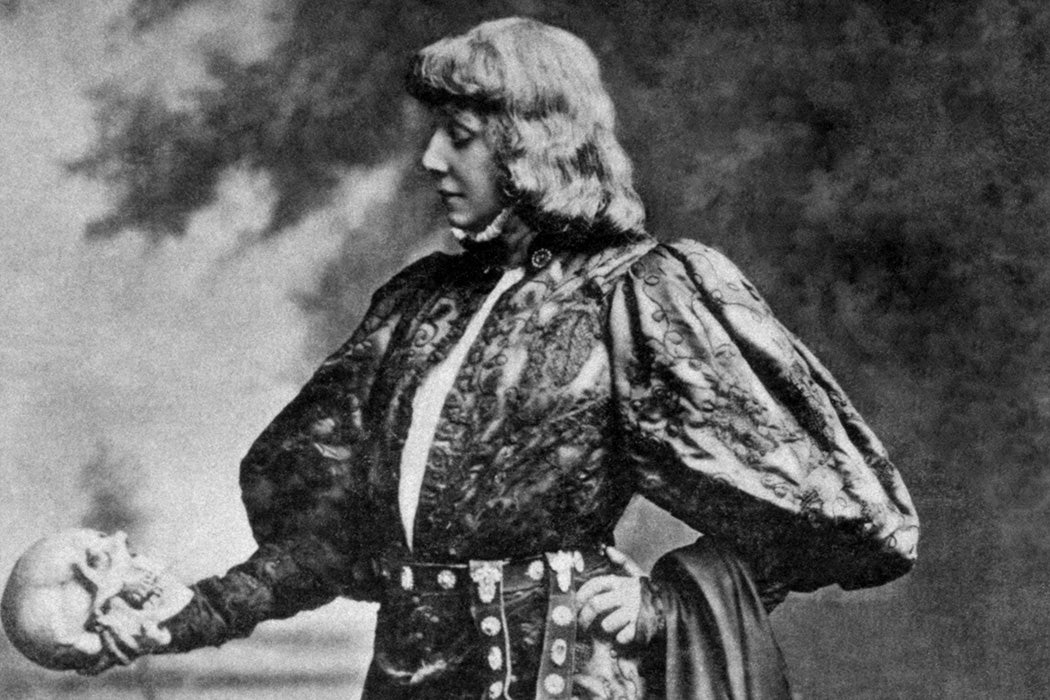 Shakespeare was born (and died) in April. To celebrate, we dipped into the Folger Shakespeare Library’s collection on JSTOR, dug up some photos of actors who’ve played Hamlet, and paired them with articles on JSTOR about the actors’ performance. There we found stories of actor rivalry, rave amateur reviews, dissmissive digs, and a healthy dose of high drama. Alas, if that’s not enough Hamlet, you can explore the play line by line using the Understanding Shakespeare tool developed by JSTOR Labs.

“‘Last evening I was at the representation of Hamlet at Drury Lane theatre. … I was “rapt, inspir’d.” Young Roscius in Hamlet, even in Hamlet, lost none of the interest he had excited in the more simple character of Achmet. In the variety of Hamlet’s character it is almost impossible not to fail in some parts …I discover’d faults even with his perfections. Roscius avoids the offence [sic] which most actors commit, that of addressing the audience  instead of the person with whom he is conversing; but he often falls into an equal one, and addresses his speech to the air, and turns his head to heaven, and “conjures the wandering stars” instead of his companion, who stands awkwardly confused to answer what was not address’d to him.'”

“The truth is, that Payne had been a precocious boy, and like so many other youthful prodigies whom the stage has witnessed, his attraction, depending upon that period of life, ended with it.”

“Charles Kean … is disdainfully referred to as a second rate actor who combined lavish antiquarian scenery, costumes, and properties with grandiose crowd scenes to substitute for and detract from his own deficiencies as a Shakespearean actor, thereby establishing himself in the history of the English theatre as a producer of great but dubious influence. … Kean’s opening in Hamlet in 1838 was a stunning success, and the press unanimously praised him in lengthy columns. [Rival actor] William Charles Macready was enraged. He put his literary friends to work, and when Kean subsequently appeared in other roles, some reviewers reversed themselves. A rising acrimony and vituperation in criticism of Kean resulted in the failure of an extension of his engagement, despite great success of the original one.”

Charles H. Shattuck Review of “Shakespeare and the Artist”
The Journal of English and Germanic Philology

“Attention lavished upon the actor-producer William Creswick, including the printing of his portrait (a “Penny Plain”) and ten drawings or bits of stage direction from his prompt books, is an odd expense of emphasis upon the insignificant records of an obviously unimaginative and second-rate figure. Creswick had “no scintillation of the mens divina that is wanting to make him a fine actor,” said Macready in 1847 when he first had to act with him; and Joseph Knight…credits him with “little subtlety or insight.” … It would seem, in short, that the “strong pictorial imagination” of this “interesting figure” consisted largely in transcribing the ideas of other men.”

“The view of Hamlet as noble and feminine helped make him an appropriate character for a woman performer. At least fifty English and American actresses played Hamlet in the latter part of the nineteenth century; among them were Charlotte Cushman, Emma Waller, Fanny Wallack, Clara Fisher Maeder, Alice Marriott, Julia Seaman, Winetta Montague, and Millicent Bandmann-Palmer. (Bandmann-Palmer, who played Hamlet hundreds of times, is the subject of Leopold Bloom’s musing, “Hamlet she played last night. Male impersonator. Perhaps he was a woman.”) The Hamlets of most women, including Cushman, Marriott, and Waller, were noted for their sincerity and seriousness and were resolutely traditional in their readings of the character as well as in stage business and costume.”

“Today there is not much interest in Barrett, for general historical opinion holds that he was not much of an artist. A typical view is that of the American dramatic critic John Rankin Towse, who thought  Barrett’s acting was no more than “workmanlike and agreeable” and that his attempts at Victorian classics were “not in any degree beyond the reach of any ordinarily experienced actor.” “At best Barrett is thought to have been a popular melodramatic actor, “congenial to the multitude,” whose personal vanity unfortunately “raised an obstacle against his acceptance as a serious artist.” “A close examination of Barrett’s life and works, especially his innovative production of Hamlet, indicates, however, that there was more to this complex man than contemporary critics reported. Actually, while Barrett did begin as a melodramatic actor, he suffered from the jealousy and condescension of his fellow artists when he sought to broaden his repertoire—that is, to infringe upon [rival actor] Henry Irving’s repertoire.”

“Edwin Booth (1833-1893) was the great Hamlet of the nineteenth-century American stage. Son of J. B. Booth, he early traveled with his father and served an apprenticeship in the West, playing a variety of roles, before he made his first impression in New York in 1857 as Richard III. He played Hamlet first April 25, 1853 in San Francisco. New York first saw his Hamlet in 1860. On November 26, 1864, at New York’s Winter Garden he began a run of 100 consecutive performances in the role, and thereafter until his retirement in 1891 for most Americans Edwin Booth and Hamlet were synonymous.”

“One Man’s Hamlet”
The Irish Monthly

“With the audience this Hamlet was a triumphant success. The critics were rather more guarded. “Mr. Barrymore’s Hamlet draws fewer tears than Forbes-Robertson’s,” wrote James Agate, “but it is nearer to Shakespeare’s whole creation than any other I have seen. In fact, this is Hamlet.” The ecstacy of this opening was rather blasted by the ambiguous tail-piece of the appraisement… ‘There was no ranting, no roaring, no power, except on single words, by sudden gusts; no frenzied unpacking of the heart with lengthy phrases. But it was intellectual, it was near genius, it was Hamlet, it was closer to Shakespeare’s whole creation than any other he had ever seen.'”