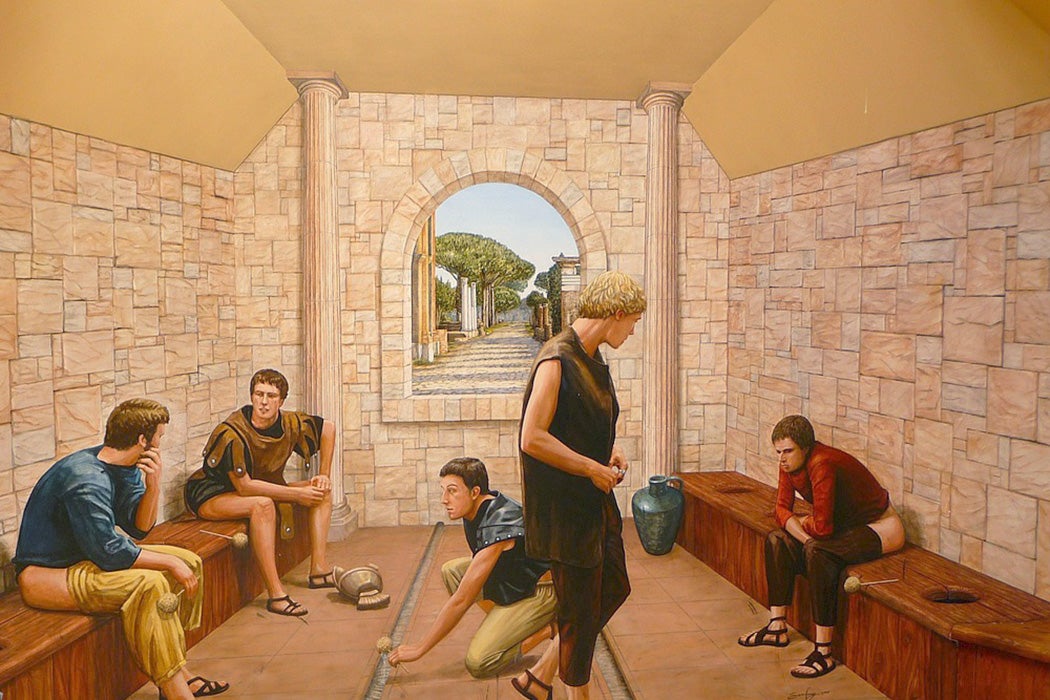 The toilet paper panic seems to be over, but personal hygiene continues to be important in the midst of a pandemic. As some people contemplate bidets, a recent study showed that one flush of the toilet can spew coronavirus aerosols three feet into the air. But if you think that’s gross, you probably don’t want to know about how the ancient Romans wiped.

Imagine a loofah, but made of fresh sea sponge, attached to a wooden rod—similar to back-washers sold in drugstores today.

The Romans had two primary ways to clean themselves post-bathroom break. Option one? A tool called a tersorium, which was “used to clean the buttocks after defecation.” Imagine a loofah, but made of fresh sea sponge, attached to a wooden rod—similar to back-washers sold in drugstores today. After using the stick to aim and the sponge to wipe, the person would dunk the sponge in a bucket full of water or vinegar to clean it off for the next user. While water wouldn’t do much in terms of sterilization by modern standards, vinegar would prove much more—if not totally—effective.

But what if you were too poor to afford a tersorium, lived in a place where they weren’t available, or didn’t happen to have one at hand when the need arose? In that case, you’d turn to one of the most readily available—and free—commodities in the world: discarded pottery. Most common vessels, from amphorae holding wine or oil to small lamps, were made of clay; thus, Greco-Roman dumps were full of pottery shards—or pessoi (Greek for “pebbles”).

Some scholars, as Charlier et al. write, suggest there were more nefarious uses for these shards. Ancient Greeks exiled their enemies using small shards, or ostraka, inscribed with their opponents’ names; if they later used these ostraka to wipe themselves, “literally putting faecal matter on the name of individuals,” it was a curse.

The authors discuss two more pessoi, “discovered in the filling of latrines close to deposits of excrement.” As expected, these items are of “rounded form with edges re-cut”; scientists confirmed “solidified and partially mineralized excrement” on their lateral surfaces.

Even with rounded surfaces, though, using stone to wipe could have resulted in discomfort, from irritation to long-term issues, like prolonged hemorrhoids. Whether using pessoi or bargain toilet paper today, it’s hard out there for a tush.