A pamphlet published in 1840 advocates a four-pronged approach to public healthcare that sounds remarkably like our own. 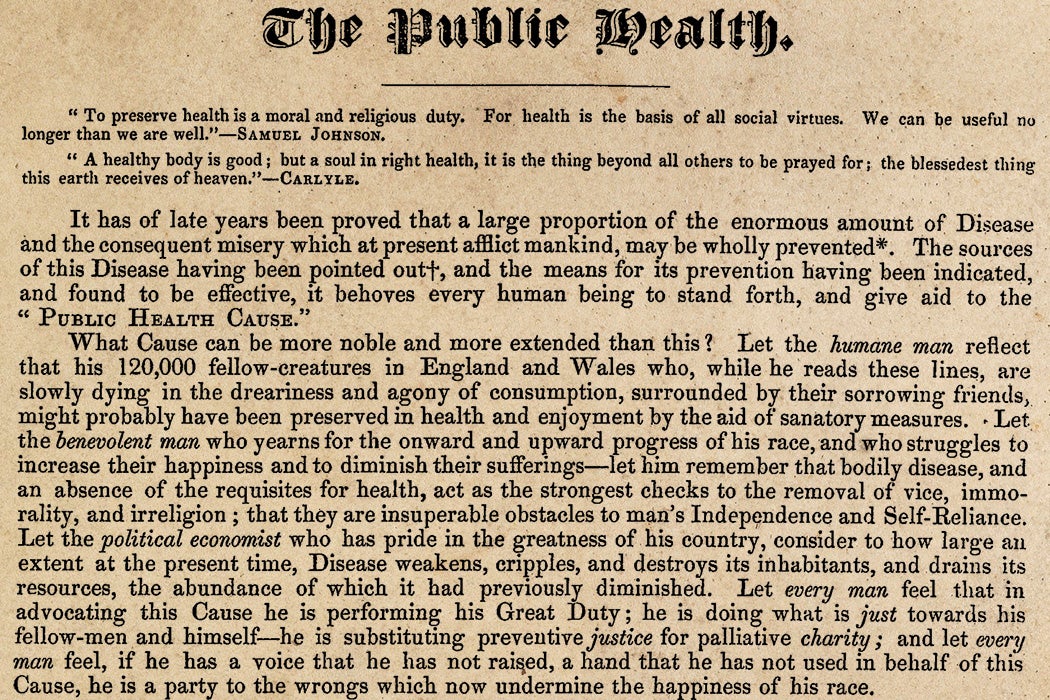 From the department of the more things change, the more they stay the same. Read the pamphlet from the Hume Tracts here.

It has of late years been proved that a large proportion of the enormous amount of Disease and the consequent misery which at present afflict mankind, may be wholly prevented. The sources of this Disease having been pointed out, and the means for its prevention having been indicated, and found to be effective, it behoves every human being to stand forth, and give aid to the ” Public Health Cause.”

Let every man feel that in advocating this Cause he is performing his Great Duty; he is doing what is just towards his fellow-men and himself—he is substituting preventive justice for palliative charity; and let every man feel, if he has a voice that he has not raised, a hand that he has not used in behalf of this Cause, he is a party to the wrongs which now undermine the happiness of his race. How is the ‘Public Health Cause’ to be advocated and advanced?

1.—By collecting and diffusing Information on the Causes of Disease, and on the Means to be adopted for its Prevention.

2.—By each individual personally carrying out such preventive measures in his home and household as are in his power.

3.—By calling upon the Government of the country to adopt wise Sanatory [sic] Laws.

4.—By assisting and co-operating with Public Companies, having for their end the Improvement of the Public Health.

It is evident, therefore, that the Working Classes are “up and acting” in the Public-Health Cause; they have also subscribed money to carry it forward; but as they feel they are labouring for all classes of the Community, and as the necessary expenses of commencing the movement have fallen upon them, they trust that every member of the Community, rich as well as poor, will contribute to their funds.

This pamphlet is part of the 19th-Century British Pamphlets on JSTOR from the Hume Tracts: A personal collection of Joseph Hume (1777-1855), Radical Member of Parliament. Hume’s collection covers the major political, economic, and social developments and reforms taking place in Britain in the early part of the nineteenth century, along with the causes he particularly championed, such as universal suffrage, Catholic emancipation, a reduction in the power of the Anglican church, and an end to imprisonment for debt.