Night of the Living Dead’s production story reads like a means to an end: a rag-tag group of creatives makes a movie on nothing to get noticed. 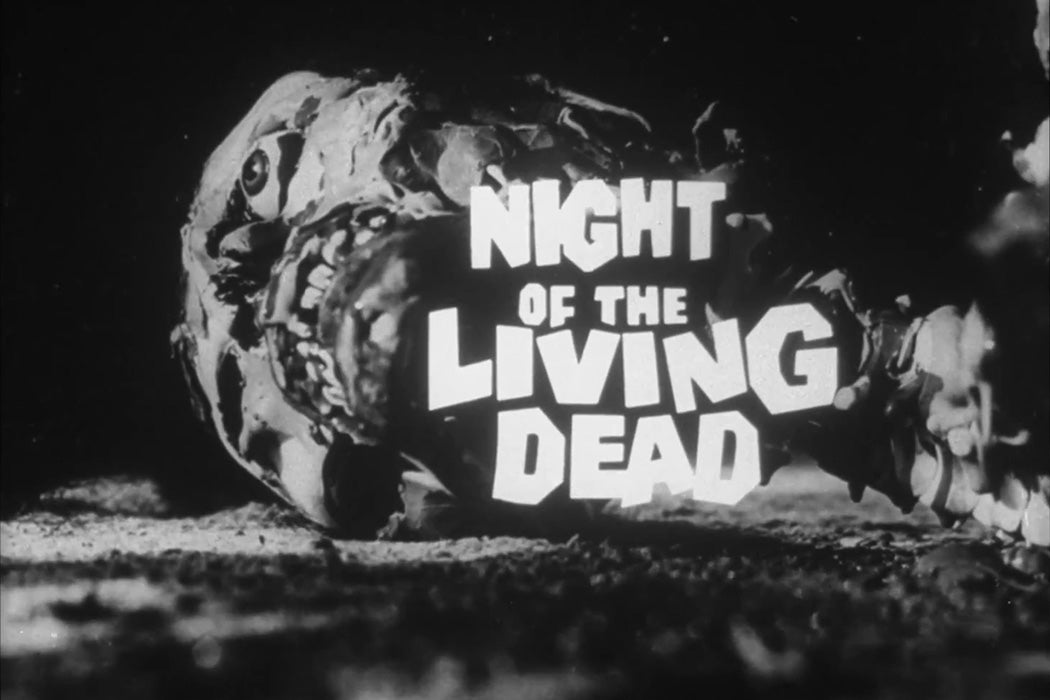 Screenshot from the trailer for Night of the Living Dead (1968).
via Wikimedia Commons
By: Kristin Hunt
5 minutes
Share Tweet Email Print

When 27-year-old George A. Romero set out to shoot his first feature, Night of the Living Dead, he had a little over $100,000 to his name and a cast of unknowns. So he got creative. For locations, he staked out abandoned buildings, reasoning that no one would care if a zombie ripped a hole in the wall. For photography, he chose 35 mm black-and-white film, hoping it would smooth over some of the ad-hoc production’s rougher edges. The blood would be Bosco’s chocolate syrup and the guts would be ham, donated from a local butcher shop.

It might sound like the beginnings of a goofy student production, but the result was a phenomenon. Night of the Living Dead became a slow-burning sensation, making back its budget a couple hundred times over at drive-ins, grindhouses, and matinee showings. Romero was credited with not only delivering an unexpected hit, but a searing social commentary that redefined an entire genre. Night of the Living Dead was a success, in every possible sense of the word.

Over the course of his four-decade career, Romero showed remarkably little interest in going Hollywood.

From this very first outing, Romero found a way to operate outside the traditional Hollywood system, filming movies with on microscopic budgets sourced from a patchwork of small investments and turning them into money-making masterpieces. This model of filmmaking, also practiced by schlock kings Roger Corman and William Castle, provided a blueprint for enterprising directors that led to a slew of influential horror films in the ensuing decades. The model endures on the indie horror scene today.

Night of the Living Dead’s production story reads like a means to an end: a rag-tag group of creatives makes a movie on nothing to get noticed, then signs a fancy studio contract and starts playing with real money. But over the course of his four-decade career, Romero showed remarkably little interest in going Hollywood. Aside from the occasional flirtation with a major studio—distributing Creepshow through Warner Brothers, for instance—he typically made his films through his own production companies, and sold to a subsidiary or specialty distributor for the theatrical release.

“If I were an independent and I wanted to go into Hollywood and say, ‘I just read this paperback and I really want to make this movie, will you buy the book?’ they might say, ‘Yeh, come on out, we’ll give you an office and a secretary and we’ll buy the book,’” Romero told Film Criticism. “But they own the property and they immediately influence what they want to do with it and their market analysts come in and they start saying, ‘We think that maybe we should change the ending because our guys don’t feel an audience is going to like this ending.’ Those kinds of interferences start almost right away, which is why so many deals in Hollywood stay in development for three, four, five years.”

Romero wanted to make movies faster, turn a profit, and put that money back into developing new projects, all with as few “interferences” as possible. He believed what he was doing was so atypical that he waved off comparisons to peers in the interview, citing little-known producer/director Earl Owensby as his closest reference. “I’ve met no one that’s working the way I’m working,” Romero insisted.

While Romero might have protested the connection, his unusual approach to moviemaking, and specifically horror filmmaking, had precedent. Roger Corman had spent the 1950s and earlier part of the 1960s earning a reputation as a reliably fast, cheap director of genre pictures, including A Bucket of Blood and a successful string of Edgar Allan Poe adaptations. He was a “rampant individualist and an economic ‘outlaw’ in Hollywood,” in Film Comment writer David Chute’s estimation, one who frequently gave scrappy young talents their first shot in the industry. In this way, he was arguably replicating a version of the traditional studio system, installing himself as a “mini-mogul,” albeit working on much smaller margins than Louis B. Mayer.

After leaving behind directing and producing work at Columbia, William Castle also built a lucrative little empire with his campy horror classics like House on Haunted Hill and The Tingler. Castle was known for his splashy publicity stunts that got audiences in the door, a strategy that some believe inspired Alfred Hitchcock to bar admittance from Psycho once the film had started. Film professor Kevin Hefferman also argues that Castle’s tactics were borrowed for the marketing of Night of the Living Dead. Just as Castle promised a $1,000 life insurance policy from Lloyd’s of London to audiences seeing 1958’s Macabre in case they died of fright, ads for Romero’s film pledged, “If ‘Night of the Living Dead’ Frightens You to Death, you are covered for $50,000!”

The cumulative efforts of these filmmakers made one thing clear: making horror movies on the cheap, on your own, was not only achievable but desirable. It had an obvious impact on the slasher filmmakers of the 1970s, who often cited Night of the Living Dead as a formative movie-going experience. “What it showed was you didn’t need that much money, you didn’t need to be in L.A., and you could do this in your hometown with a few friends and you could have a huge impact,” Shock Value author Jason Zinoman told NPR. “When I talked to all of these directors—John Carpenter, Wes Craven, Tobe Hooper—everyone has a story about when they saw Night of the Living Dead.”

Modern horror filmmakers are still replicating these thrifty production tactics in their first features, but, as the masters themselves acknowledge, their methods of distribution have already disappeared. “It’s easier to make a film,” Corman told Film Comment in 2016. “[But] the distribution is much tougher. When I started out, any decently made film would automatically get a theatrical release. Today, most low-budget and even medium-budget films do not get a theatrical release… Netflix and that type of Internet distribution seems to be the way.”

As Covid-19 continues to halt most theatrical releases for the foreseeable future, streaming certainly seems to “be the way” for the moment, though the time may be right for enterprising horror filmmakers to reinvent the wheel again, whether that’s through a new streaming platform or a quarantine film festival.