The Art of Digital Addiction

Digital addiction is inspiring plays, books, films, and art — just as other forms of addiction have in the past. 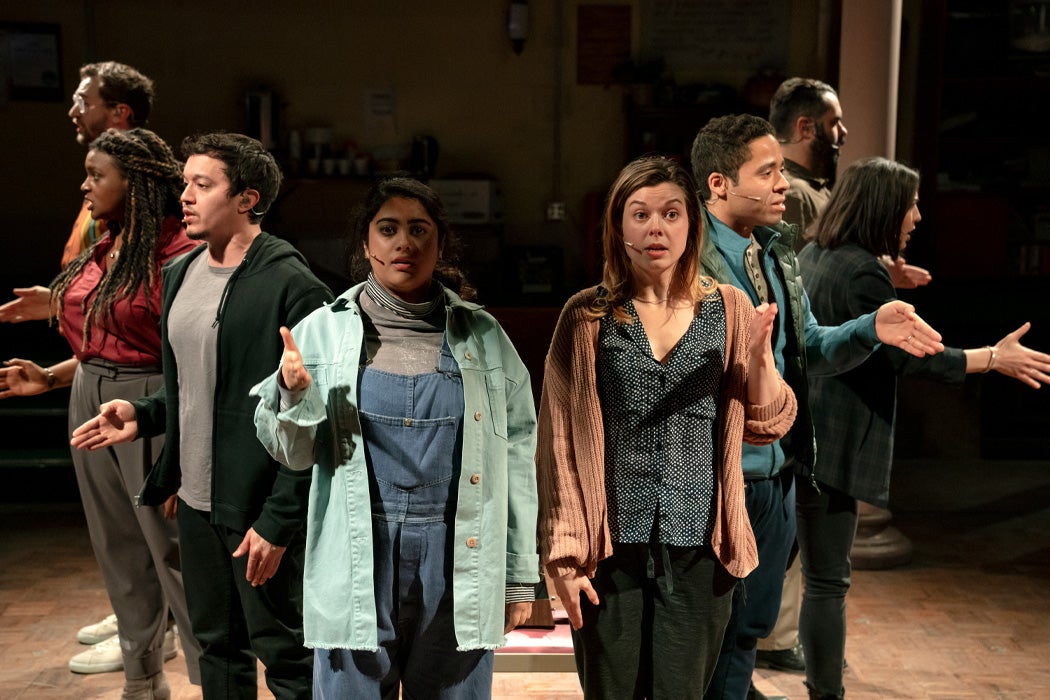 Those lines come from Octet, a new a cappella musical about digital addiction from Tony-winning composer Dave Malloy. Octet offers a theatrical riposte to our increasingly saturated digital lives: Over the course of ninety minutes, the show takes us inside an imagined 12-step support group for eight digital addicts, each of whom speaks to a different online pathology. I was lucky to see a recent performance, and was awed by its insightful (not to mention amusing) take on digital temptations like online dating, conspiracy sites, and Candy Crush.

But perhaps the most striking thing about Octet is its very existence. As a thoughtful and entertaining consideration of the various perils of life online, Octet is an early harbinger of an inevitable wave of cultural production: Art and entertainment designed to help us navigate the emotional and psychological perils of the digital world.

“THE ONLINE COMMUNITY IS BY DEFINITION PRO-SOCIAL AND PRO-TECHNOLOGICAL”

These distresses are the necessary by-product of technological innovation itself. As Paul Virilio famously wrote in “An Architect’s Crime,” the advent of any new technology “necessarily entails the creation of a new kind of specific accident; for the invention of the ship ushered in the shipwreck; the invention of the railway, the derailment; of the plane, the plane crash; of the computer, the bug or virus.”

But the disasters inherent in new technology can be psychological as well as material. Some scholars have already framed the challenges of information technology in the language of addiction: In “Digital Disturbances, Disorders, and Pathologies,” Noela A. Haughton et al. summarize a 1998 definition of internet addiction as “an impulse-control disorder” in which “individuals derive satisfaction and gratification as they compulsively check their e-mails, browse Internet sites, or pursue other technology-centered activities, such as gaming and gambling, and are often unable to control the desire to be online.”

I’m not convinced that the addiction framing is a particularly accurate or helpful way of understanding the perils of life online. As Amnon Jacob Suissa writes in “Medicalization and Addictions,” “the more we label people as having or suffering from pathologies, the more we multiply their number.”

Octet joins a rich tradition of artistic works that map emergent temptations and help us navigate their risks.

But the addiction framing is useful in embracing the potential of art to help us understand and address the challenges of our new lives online. Whether or not you consider them “addictions” per se, there are certainly many mental health and relationship issues that are unique to the online world—issues that often involve compulsive or even pathological behaviors like excessive online shopping, relentless social media browsing, or constant online gaming.

In engaging directly with these compulsions, Octet joins a rich tradition of artistic works that map emergent temptations and help us navigate their risks. Throughout history, every time we have encountered a new mind-altering substance, an outpouring of art and entertainment has helped us to figure out its potential risks and benefits.

While we are now grappling with a technology rather than something we eat, smoke, or swallow, the challenges closely parallel previous encounters with drugs and alcohol. Understanding how art has helped us navigate those previous encounters can help us anticipate the way it may now help us come to terms with our digital compulsions.

There are three key ways art helps us make sense of mind-altering substances (or technologies): Through causal stories, through cautionary tales, and through invocations of mind-expanding potential.

The tradition of using mind-altering substances as plot devices goes at least as far back as Shakespeare. “In various plays the drunkenness of some character is an essential feature of the plot,” scholar Albert H. Tolman writes in “Drunkenness in Shakespeare,” “and in most of these cases one feels a distinct note of disapproval.” As evidence, Tolman cites the Borachio’s drunken words in Much Ado About Nothing, which, when overhead, thwart a villainous plot; Othello’s dismissal of a drunken Cassio, as engineered by the evil Iago; and Hamlet’s condemnation of his uncle’s drinking.

Where once we blamed alcohol, now we use technology as the plot device that leads people astray. To take another example from musical theatre, the musical Dear Evan Hansen portrays an online video as the crucial catalyst for an escalating series of misrepresentations and misunderstandings.

Art that uses digital compulsion as plot device serves as a useful reminder to continually scrutinize how technology shapes our own life choices.

These kinds of causal stories are dramatically useful—it’s easier to sympathize with a character who can blame his bad behavior on the devil alcohol or the demon YouTube—but they also help readers, audiences, and listeners recognize the potential impact of substance use and abuse. If excessive drinking, smoking, or web-surfing can lead a hero astray, we are implicitly warned, then we need to recognize the potential for these temptations to derail our own lives. By tapping into that tradition, art that uses digital compulsion as plot device serves as a useful reminder to continually scrutinize how technology shapes our own life choices.

But art and literature about mind-altering substances needn’t be limited to implicit warnings about their potential life-altering dangers: There is also plenty of art that explicitly warns us of the risks of addiction and substance abuse. As George W. Ewing writes in “The Well-Tempered Lyre: Songs of the Temperance Movement,”

Few people today realize the extent of the publication of temperance verse or its all-pervasive influence in the lives of the white Anglo-Saxon Protestants of nineteenth-century America. The other section of the choir is more often heard, for some drinking songs, such as “The Little Brown Jug,” are part of the repertory of virtually every English-speaking vocalist… In spite of this early recognition that poetry might play a part in keeping a people sober, centuries passed before the output of anti-drinking verse approached that of drinking songs.

The temperance movement—and its music—eventually found expression in the call for Prohibition, which went into force just as the film industry emerged. As Michael C. Gerald writes in the exhaustive “Drugs and Alcohol Go To Hollywood,” “[t]he use of alcohol in excess is a familiar film theme, which is not surprising since it mirrors American society’s involvement with booze.” As Gerald chronicles, these films typically followed one of a few, familiar trajectories:

The drinker may engage in regular heavy drinking leading to humorous situations. The drinker may be a celebrity or an “ordinary” individual whose career or life has followed a progressive downhill trajectory. Disastrous consequences result for the drinker, which often reverberate to the family or other close relationships. Still other films continue by retracing the alcoholic’s path back to recovery and even redemption.

If the alcoholic or drug addict has become a stock character through these cautionary tales, we can anticipate that the tech addict will soon become just as familiar. Already, in the movie Her, the novel The Circle, and the TV show Black Mirror, we have met characters who serve as object lessons in technology over-use.

As much as these portrayals sometimes rankle—please don’t make me think twice about how much I love my iPhone–there’s a reason we have a long cultural tradition of depicting addicts in art and entertainment. By explicitly preaching the dangers of substance or technology over-use, art can inspire us to keep our own compulsions in check.

While mind-altering substances have often been portrayed as dangerous or harmful, there’s also a creative tradition that celebrates their potential. In “William Burroughs and the Literature of Addiction,” Frank D. McConnell notes that substance abuse literature sits well within America’s frontier tradition. Citing critic Leslie Fiedler, McConnell writes that drugs are “simply another permutation of the American myth of westering, out of which he has gotten so much mileage: a retreat into the last undiscovered territory, the inner space of the mind.” Arguing that Burroughs’ Naked Lunch is a fine representation of this tradition, McConnell writes that:

It is only appropriate that the literature of addiction, European and Romantic in genesis, should find its fullest articulation in an American novel, just as it is inevitable that America should become the most addicted country in the West, and that only within the last half-century.

Even as Burroughs was exploring drug use on paper, the motion picture industry was birthing a new wave of films that not only tolerated substance use, but celebrated it. Gerald writes:

The 1960s witnessed a sharp escalation in societal interest in and use and general acceptance of such mind-altering substances as LSD and marijuana. This was coupled with the demise of the Motion Picture Production Code’s restrictions on subject matter deemed unsuitable for movies. With these changes came a number of movies positively depicting the use of such drugs to escape the boredom of traditional living and to relieve workplace pressures and the tension between the establishment and the counterculture.

If tech addiction literature follows this path, we may see productions like Octet countered by voices that celebrate our collective disappearance into the digital ether. The book and subsequent movie of Ready Player One suggest one potential framing: As the physical world grows gradually more polluted and less tolerable, the digital world may represent a relatively more appealing retreat.

But at this moment, with this set of technologies, our need for assistance in navigating the perils of online living vastly outweighs our need for more cheerleading. That’s why it’s so exciting to see a work of art like Octet join in the rich tradition of art that helps us come to terms with the negative impacts of mind-altering substances and technologies: By offering us causal and cautionary tales, art can help us recognize the risks of abuse and over-use alongside the benefits of mind-altering potential.

The more those problems seep into our day-to-day lives, the more we’re going to need stories like these—not the least because so many of those problems are larger than the internet itself. To quote one final lyric from Octet: 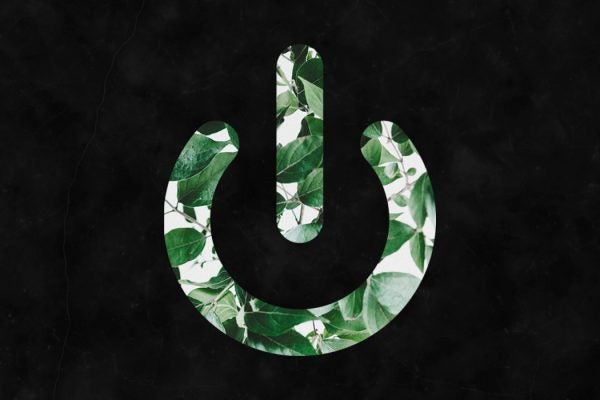 The 4 Questions to Ask before You Unplug

If you're concerned about the internet's effects on the world and on yourself, unplugging might not be the answer.