Salamanders Crossing: This Way to the Vernal Pool!

They may look like random puddles, but some states are building million-dollar tunnels to direct wildlife to these seasonal refuges. 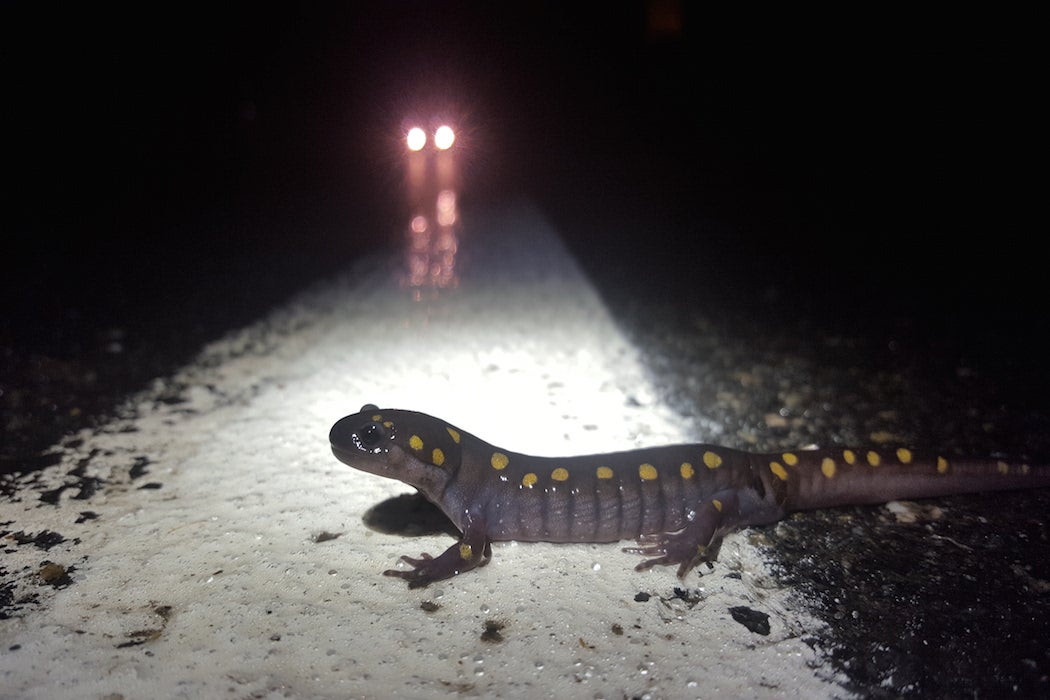 On wet spring nights, salamanders and frogs emerge from under rocks and logs across the United States and make their annual trek to seasonal puddles of water known as vernal pools. Traveling 100 meters or more, the amphibians slip into these small ponds that form each year in the same location. They are there to breed and the vernal pools are the only places they can do that.

It’s easy to mistake vernal pools for random puddles on the forest floor or flood plains, as they hold no fish and dry up during the summer and fall. But in the past few decades, ecologists have learned that the water is essential for a range of forest species. The more researchers discover, the more they realize how little protection they have from development. “I’m very concerned about the future of so-called isolated wetlands,” says Aram Calhoun, a wetland ecologist at the University of Maine, “They’re not isolated in any way—but that’s what they’ve been called.” They cannot be paved over without consequence. Calhoun and other researchers have led efforts in their own states to find all the vernal pools, and make sure the ones most essential to larger ecosystems are allowed to dry out and refill for decades to come.

To Protect Vernal Pools, You Have to Find Them First

Scientists first recognized vernal pools as ecosystems in the 1930s, but it took years to understand that they were breeding destinations for native crustaceans, such as fairy shrimp and hyperlocal salamander and frog species. Since then, ecologists have found that other species know when the protein-rich eggs and just-hatched amphibians will be available to eat, says Calhoun. “The more research we do, the more we find that these [vernal pools] are little fast food joints.” Animals drop by for dietary boosts when resources are scarce, like when other waters are still frozen. California researchers have documented dozens of bird species dipping into vernal pools for a snack. In Maine, bears come by to drink water, female bullfrogs visit as a respite from the males, and turtles burrow in the remaining mud at summer’s peak.

For many areas, this research came too late. Developers have filled in much of the shallow water and loggers, by removing trees, have shifted soil and disrupted water flow that fills seasonal pools from the ground below. The EPA estimates that less than ten percent of California’s vernal pools still exist. Many other states will never know how many pools have disappeared, in part because they never knew how many they had to begin with, since the depressions are often assumed to be unpredictable runoff ponds.

Meanwhile, the remaining pools have little protection because there is no independent federal regulation specifically for wetlands. Countrywide oversight of vernal pools comes via the federal definition of “waters of the United States,” explains Calhoun. Last December, the White House announced a plan to narrow the current definition and focus only on waters that touch one another, which would leave the vast majority of vernal pools at the mercy of state regulations. Local laws defending the features may not even exist, let alone protect the most biodiverse and ecologically important pools. “They want hydrological interactions,” says Calhoun. “We ecologists think of ecological interactions.”

These tenuous protections made state agencies, conservation nonprofits, and academic ecologists to realize they have to forge their own pool rules. “With that lack of information and lack of protection, we feel a sense of urgency of wanting to address this and get people more aware that there are vernal pools out there and why they’re important,” says Yu Man Lee, conservation scientist with the Michigan Natural Features Inventory out of Michigan State University Extension.

Her state is working on finding the pools. Since 2011, Lee, her colleagues, the Michigan Department of Natural Resources, and private conservation groups have been scanning aerial landscape photographs for indicative watery patches. Candidates are most visible in the spring when trees are leafless and the depressions in forest grounds are full. For swathes of the state densely covered by evergreens, the researchers are waiting on fly-over radar scans to detect pools below the pine needles. Lee estimates they have reviewed only about ten percent of the state’s forested landscape for pools, mostly because the team doesn’t have a budget to collect data and is limited by availability of images produced by other agencies.

As they scan the landscape, the researchers are also deciding what depressions count as vernal pools. “What’s the criteria we’re going to use for saying which ones we’re going to protect, and how do we decide?” Lee asks. As she and her colleagues learn more about what Michigan pools look like, where they form, and what wildlife they contain, the team revises their interpretation. “I thought when we started this, we would have been able to bang that out right off the bat,” says Lee, but “it’s getting more complicated than we thought.”

Calhoun first attracted the public’s interest in the subject in 2007, when she helped write state laws that required developers to get permits before building over some vernal pools. That triggered a wave questions. “There’s nothing like a state regulation to get people interested,” Calhoun says.

As she started giving presentations, she quickly learned that photos of amphibians in the pools made people recoil.

Her early efforts to educate the public backfired. As she started giving presentations, she quickly learned that photos of amphibians in the pools made people recoil. “I hadn’t realized that people don’t think snakes are wonderful,” she said, so the team switched to the characters that Mainers love. Instead of snakes, they now talk about a female moose that, for three consecutive springs, stepped over her lab’s research fences on Sears Island to snack on greenery in the pools.

Towns started warming up to the idea of protecting the ecosystems, but one economic advisor asked what the 2007 law might be costing municipalities—could it be impeding economic growth? That inquiry set off a plan to create new, optional vernal pool protection guidelines, ones towns could adopt if they wanted stronger preservation measures while also keep developers interested in their properties.

Crafted with builders, economists, and biologists, the agreement lets developers bypass the pool permits in designated zones, and instead, give a portion of the land’s value to a trust that will permanently preserve vernal pools in more rural areas. Two towns agreed to be the trial cities, and eight more are interested, says Calhoun. Since Mainers take pride in the state’s rural character but also want to encourage economic growth, this compromise tactic could appeal to a lot of municipalities, Calhoun adds.

Other states with fewer habitats to preserve have chosen different vernal pool protection strategies. In New Jersey, the Department of Environmental Protection has started building under-road tunnels that let animals complete their yearly migrations without getting squashed by cars. Most people might not notice driving over an amphibian, says Brian Zarate, a senior zoologist with the department’s endangered and threatened species program. “When you run over a frog or salamander with your car, you probably don’t even realize you’re doing it half the time, especially on a rainy February or March night,” he says. But about twenty years ago, Zarate and his colleagues heard one-off reports of people seeing hordes of salamanders and other species crossing Jersey roads. After observing these yearly migrations, the department realized amphibians were crossing particular roads built between their normal habitat and their vernal pools.

While the state has land set aside for conservation and mapped several thousand pools since the early 2000s, discovering these crossings presented the department with a new problem—how to deal with the fact that animals need to travel over areas that have been paved over by humans who use the roads for their own transport. To keep frogs and salamanders out of harm’s way, the department is building several passageways in key migration areas that go underneath the roads, and will put fencing around the roads to help corral the animals into their dedicated tunnels.

Each project is expensive, financially and time-wise, as there can be several property owners in charge of land along the route, says Zarate. That’s part of why the team is ensuring that each tunnel–some of which have a price tag in the six figures–connects amphibians to not not just their favorite vernal pools, but to areas likely to be excluded from development. “We are cautious about investing that kind of money for a road structure project when five years from now, we’re just going to be leading wildlife into a parking lot or into a housing development,” he says. Several other states in the northeast have observed how roads disrupt vernal pool access and built similar structures, and it’s possible even more states will follow suit as their growing infrastructure starts to resemble New Jersey’s, Zarate points out.

Though Michigan, Maine, and New Jersey are at different stages in their vernal pools protections, they’re ahead of many states that aren’t considering these ecosystems. Oftentimes, states take their conservation cues from federal government standards, says Calhoun, which is part of why she’s concerned about the recently-loosened national laws. “Without that stick, a lot of states just don’t bother doing anything,” she says. So little national guidance makes it hard to advise states on how to get vernal pool protection and awareness started, says Calhoun, but she does have one recommendation: Bring anyone who thinks they’re opposed to regulation to the pools. That’s what she did for all the developers she worked with. As she watched these people in suits hold animals on the edge of the water, she knew it worked. “They fall in love all over again with what they did when they were 5 years old,” she says. “They come out different than when they went in.”

Share Tweet Email Print
Have a correction or comment about this article?
Please contact us.
ecosystemenvironmentalismEcologyJournal of the Pennsylvania Academy of ScienceProceedings of the National Academy of Sciences of the United States of AmericaThe American Midland NaturalistThe Southwestern Naturalist 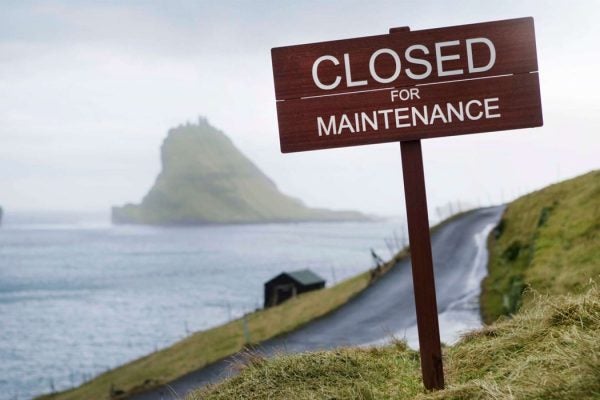