There’s a constant attention to the burdens of history in Robert Hayden’s poems. Even amid the beauties of life, the ghosts of the past linger. 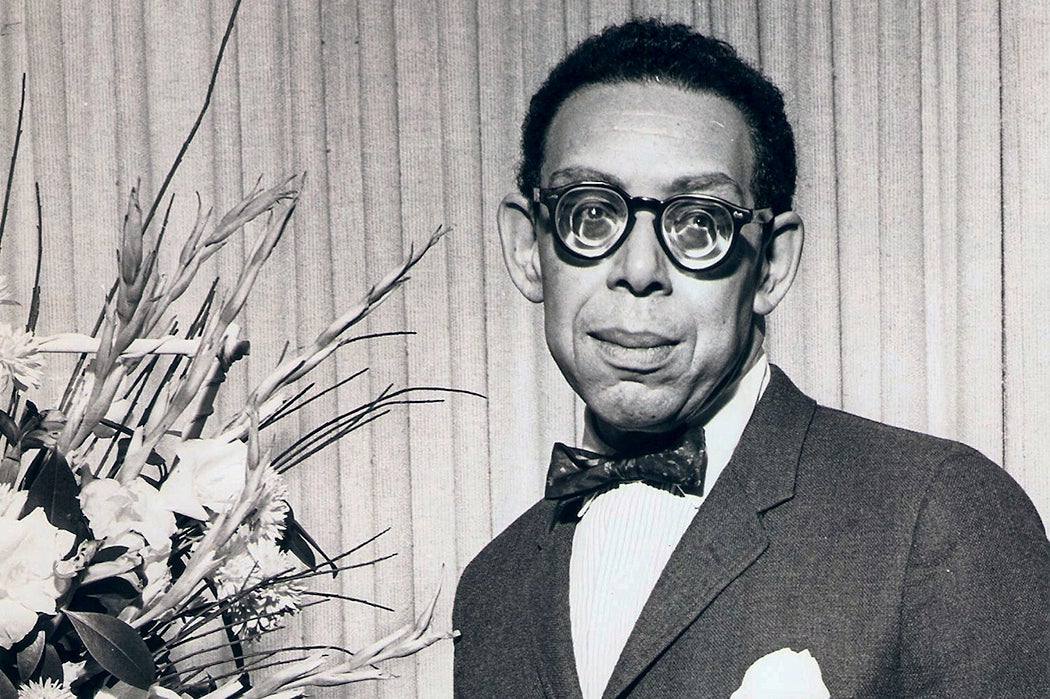 A few months ago I saw video of Robert Hayden for the first time. I had seen pictures and heard his voice in audio recordings, including the readings from his time as Consultant in Poetry to the Library of Congress, from 1976 to 1978. But there he was, alive on video in all of his glory, wearing a tasteful blazer and turtleneck, with those thick Coke-bottle glasses (for the chronically poor vision that he suffered from since childhood). Hayden had a deep, clear voice that, in an alternate reality, might have landed him in radio broadcasting.

The video is from the archives of the Brockport Writers Forum. It is an hour-long conversation with fellow poet Al Poulin, Jr., from March 3, 1975. At the beginning of the interview, Hayden reads and discusses two of his best known poems, the New Orleans set piece “A Ballad of Remembrance,” and a perennial classic, “Those Winter Sundays.” As a poor black kid in 1920s Detroit, Hayden fell in love with words. He began imitating some of his favorite poets, and eventually met one of his idols, the great Langston Hughes.

Midway through the interview, however, the conversation turns toward a vexing topic: accusations of Uncle Tomism by other black writers. Those accusations are well known among Hayden’s fans and critics. I’ve been reading and studying Hayden’s work for several years now. I know how significant this conflict was in his life. But I’ve sometimes wondered if the whole controversy was overblown, a distraction from the richness of his writing. However, watching that video, I realized, maybe for the first time, just how much the slurs hurt him. You can see it in his defensive posture, hear it in the sarcastic frustration in his voice. In the interview he defuses the tension with humor and wit, but you can tell the words cut deep.

Robert Hayden was a professor of English at Fisk University for twenty-three years, beginning in 1946. At a black writers’ conference at Fisk in 1966, as the spirit of Black Power was beginning to move in the hearts of black college students, Hayden sparked a firestorm by saying, “Let’s quit saying we’re black writers writing to black folks—it has been given importance it should not have.” Part of the issue was nomenclature. As he says in the Brockport interview, “You know, one doesn’t know what to say today, Negro, Afro-American, black. I’m not really used to black. I prefer, I think, Afro-American.”

“If anybody’s got a stake down here, we have… What was all that sweating and bleeding and dying about?”

Hayden was of that generation who grew up with “black” as a slur, who now found themselves surrounded by youth who had appropriated the term and wore it proudly. Hayden also felt that the designation of “black writer” was a form of ghettoization, a concession to the segregation that civil rights activists were supposedly fighting against. As he explains in the interview: “To support separatism… is to give aid and comfort to the bigots… We’ve been in this country for almost 400 years. If anybody’s got a stake down here, we have… What was all that sweating and bleeding and dying about?”

In the recent book Robert Hayden in Verse: New Histories of African American Poetry and the Black Arts Era (University of Michigan Press, 2018), Derik Smith leans into the controversy and builds his entire critical study of Hayden’s poetry around it. He starts with an anecdote about a recent encounter with Haki Madhubuti, the poet, educator, and publisher, who is a central figure in the Black Arts Movement. Smith was reticent about telling him he was working on a book about Hayden. Madhubuti surprised him when he responded with, “Hayden is one of my heroes.”

After that experience, Smith reassessed the prevailing critical narratives about Hayden as an opponent of the Black Arts Movement. What came out of that 1966 conference at Fisk was much more significant than just a petty dispute about naming. This was a critical conversation about poetry and politics, a conversation that informed Hayden’s writing, and influenced the Black Arts Movement itself. In a chapter titled “Quarreling in the Movement,” Smith writes:

Indeed the ways in which Hayden differed from many who are conventionally associated with the Black Arts Movement—his universalism, his reverence for the Western canon, his Apollonian writerly aesthetic—are precisely the elements of Hayden’s artistic comportment that made him an influential figure in American poetry today. I insist that Hayden’s various quarrels with certain aesthetic and political conventions of the Black Arts era represent a part of that period’s richness and should not be the cause for his omission or avoidance in critical conceptions of the period, just as they did not result in his silencing or banishment during the time in which they took place (21).

Too often critics have reduced this argument to two sides: In the white corner we have Hayden the universalist, the disciple of W. H. Auden and W. B. Yeats, the elitist, assimilated bow-tie wearing Negro. And in the black corner we have the militant, daishiki-wearing, Afrocentric folk poets in the Black Arts Movement. Throughout Robert Hayden in Verse, Smith explodes that dichotomy, and effectively shows that the arguments with the BAM were substantive. They were important critical conversations about the substance of black writing, about the role of the black artist, about poetic forms and how they might be used and by whom, about the inescapably political nature of art for the black artist—and for everyone else.

One key piece of evidence that Smith returns to often in his arguments about Hayden and the Black Arts Movement is Hayden’s Malcolm X elegy, “El-Hajj Malik El-Shabazz.” One outcome of that BAM conference was Hayden’s inclusion in the 1969 anthology For Malcolm, a critical text in the development of the movement. Hayden also included the poem in his own book Words in the Mourning Time (1970), a collection that explores the violent conflicts of the 1960s, the wars and assassinations that terrified—and motivated—a generation of artists and activists.

Smith also notes that, at the Fisk conference, Hayden read his poems “Middle Passage” and “Runagate, Runagate” to great applause from the crowd. Both Hayden and his BAM adversaries understood that their conflict was an intraracial dialogue taking place within a larger world dominated by white supremacy. They just disagreed over strategies to confront it. “El-Hajj Malik El-Shabazz” celebrates Malcolm X while also critiquing the Nation of Islam, in which Malcolm found an outlet for his anger about the racist violence that destroyed his family, and so many other families like his:

The icy evil that struck his father down
and ravished his mother into madness
trapped him in violence of a punished self
struggling to break free.

Malcolm eventually broke with the Nation and revised some of his thinking about race, even as he remained committed to a radical vision of black liberation, anti-colonialism, and social justice.

To borrow a concept from the Hayden-esque poet Carl Phillips, in his critical essay “A Politics of Mere Being,” what was at issue here was that Hayden was not “correctly political” (Phillips’s riff on the oft-abused slur of “politically correct”). One cannot argue that Hayden’s poetry neglected black history and the black freedom struggle. Rather, it was his high modernist style, and commitment to Eurocentric forms of poetry, that seemed to be at odds with the Black Arts Movement’s ideal of the poet as one who is closer to the tastes and forms and language of “common” black people, including oral forms such as spoken word, the blues, the sermon, and the burgeoning street poetry that became rap.

The distance from the folk was a feature, not a bug in Hayden’s poetics.

However, Smith argues that the distance from the folk was a feature, not a bug in Hayden’s poetics. As he argues, “Perhaps more than any other influential black poet of the twentieth century, Hayden used verse to consciously consider his distance from forms of community and culture associated with the black folk masses” (53). As many critics have pointed out in their recitations of this controversy, some of the BAM artists who criticized Hayden grew up in comfortably middle-class backgrounds, and knew nothing of the poverty and suffering that Hayden lived through in the depression-era slum of Paradise Valley in the city of Detroit. Yet Hayden grew up to become a published poet and college professor, and while his renderings of black folk culture in his poems often came from direct experience, he transposed that knowledge into written poetic forms that had an objectivity and detachment that some critics read as aloof, but which Hayden saw as a way to honor the universal value to be found in those particular ethnic experiences.

As a member of the Baháʼí Faith, Derik Smith brings a unique perspective to his research. In several poems Hayden refers to his faith, including poems where he uses terms such as “The One” or the “Blessed Exile,” in reference to the prophet Bahá’u’llah, the founder of the faith. And one of Hayden’s poems is directly about the faith: “Bahá’u’llah in the Garden of Ridwan.” Hayden embraced the religion’s ideas about the oneness of humanity and the truth of all religions, and this universalism shaped his perspective on race and racism. There is a further personal touch in Smith’s study: Robert Hayden knew his parents, Alan and Magda Smith, whose names are included in the dedication to “The Islands,” a poem that appears in Hayden’s last collection, American Journal, published in 1978, just two years before he succumbed to cancer, at age 66.

“The Islands,” a lesser known poem in Hayden’s oeuvre, actually captures much of what makes him a unique and powerful poet. While in the U.S. Virgin Islands with his wife, the piano teacher Erma Hayden, and among their Baháʼí friends, Hayden contemplates the beauty of the place and the people, while recognizing the afterlife of slavery in the land where sugar mills once flourished:

The roofless walls, the tidy ruins
of a sugar mill. More than cane
was crushed. But I am tired today

of history, its patina’d cliches
of endless evil. Flame trees.
The intricate sheen of waters flowing into sun.

There’s a constant attention to the burdens of history in Hayden’s poems about slavery, lynching, the Holocaust, and war. Even amid the beauties of life, the ghosts of the past linger.

As the world reels from the global coronavirus pandemic, the luckier among us remain quarantined in our homes to avoid infection. Others continue to go out to work as essential employees, risking exposure. The bravest are on the front lines, in hospitals, treating the sick and dying. The whole experience is made more terrifying by public officials promulgating misinformation about the dangers we face, and by capitalist vultures who can only see the dead and dying as an opportunity for profit and consolidating power. In his moment of fatigue, “But I am tired today of history, its patina’d cliches of endless evil,” Hayden becomes most relatable. 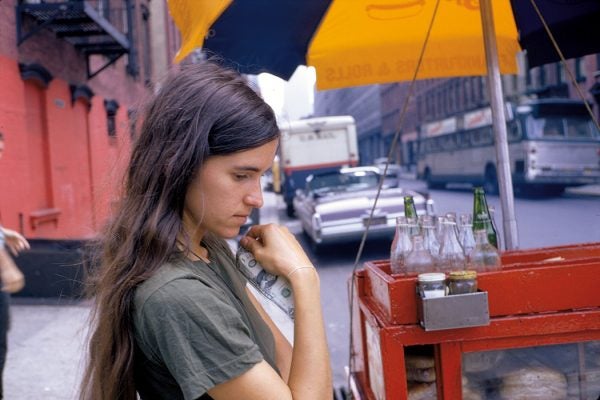 In the poet’s work, the small and ordinary rise to the level of heroic adventures. If we value human life, then we should value what makes up a life.

Are You Still Watching?

The work of cinema in the age of streaming services.