In Early America, some prestigious residents advocated for the replacement of cane sugar, supplied by enslaved workers, with maple sugar from family farms. 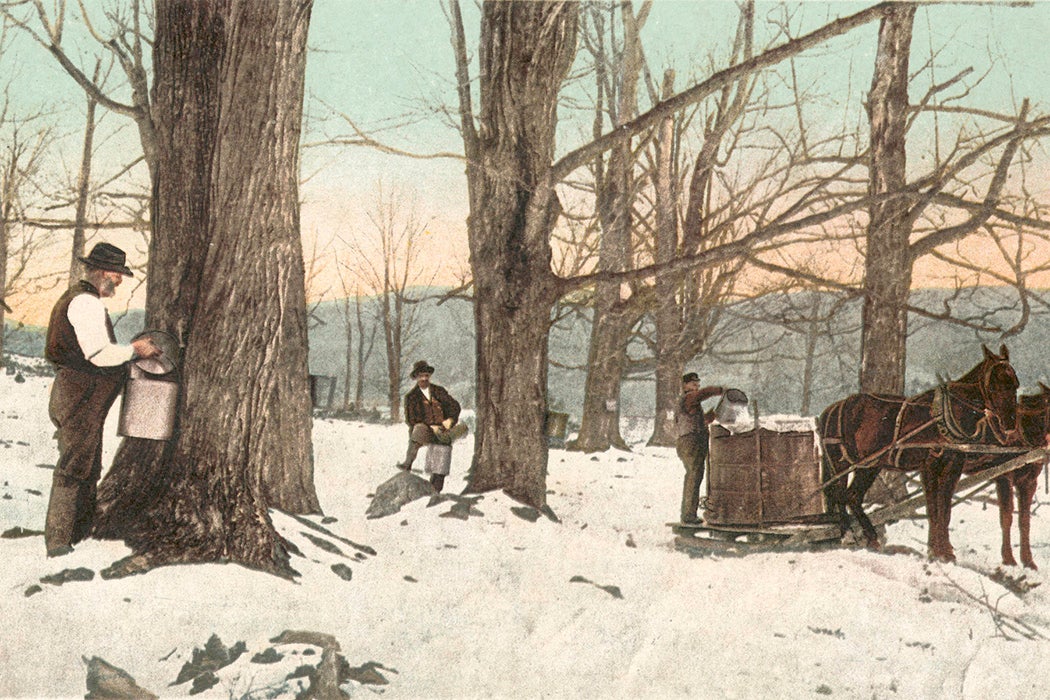 Across many parts of the rural northeastern United States, early spring is marked by the scent of maple sap being boiled down into syrup and sugar. As early American literature scholar Mark Sturges writes, the romantic image of families tapping trees and producing delicious sweet treats caught the imagination of some prominent Americans in the 1790s. They advocated for maple sugar as a clean, ethical alternative to cane sugar produced by enslaved laborers in England’s island colonies—getting quite far out ahead of themselves in the process.

Sturges notes that the American maple sugar bubble came at a time when British abolitionists were organizing a mass boycott of sugar produced on West Indies slave plantations. Maple sugar boosters presented the sweetener as both a viable alternative and a symbol of a free, agrarian, scientifically progressive society.

Rush argued that it would be impractical to centralize boiling houses and that individual families should handle the entire process.

One of maple’s prime proponents was William Cooper, who founded a maple sugar business in upstate New York in 1789. He won support from several big-name Philadelphians, including Benjamin Rush, a prominent physician and signer of the Declaration of Independence. Rush wrote enthusiastically about scientifically proven methods of tapping maples and the potential for widespread cultivation of the trees. Generally suspicious of industrialization, he argued that it would be impractical to centralize boiling houses and that individual families should handle the entire process. He also claimed that the use of “the frugal labor of a farmer’s family” was more cost-effective than the use of slave labor, as well as being more ethical.

Another Philadelphia resident, Tench Coxe, promoted maple sugar as part of his work as assistant secretary of the Treasury under Alexander Hamilton. Coxe’s 1794 report A View on the United States of America included a full chapter on the maple sugar industry. Using wildly overinflated information from Cooper, he claimed that the farmers of the Northeast could meet the nation’s entire demand for sugar by cultivating maple trees on their land.

Perhaps the most important supporter of maple sugar was Thomas Jefferson, a man well-known for his fascination with agricultural experiments. During the American Revolution, he had planted crops, including olive trees, at Monticello as part of a campaign to free the nascent nation from dependence on imports. During the maple sugar bubble, he became equally enthusiastic about growing maple trees, claiming that the nation’s maples could not only satisfy its own needs but supply exports to Europe, undercutting cane sugar. Ironically, Jefferson’s plans for freeing the American economy were often carried out by the people he enslaved on his estates.

Jefferson’s attempts at growing maple trees flopped terribly, with seeds and transplanted seedlings failing almost immediately. And, just a few years into his own maple venture, Cooper gave up as well, chastened by several years of short springs that allowed for little sugaring.

Yet, in one way, the maple boosters were right. Maple sugaring has proved difficult to consolidate into large industrial enterprises, leaving a significant part of today’s market in the hands of small family operations.

Two educators use the history of corn, from the domestication of maize 10,000 years ago to today's ubiquitous "commodity corn," to teach about biodiversity.