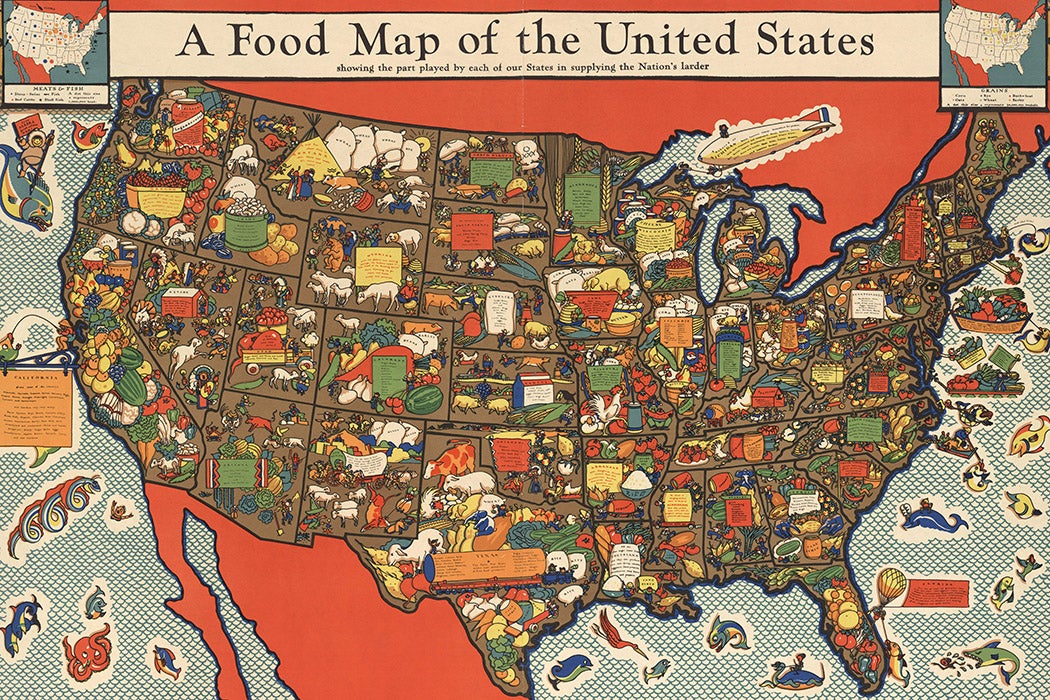 A food map of the United States, c. 1932
via JSTOR
By: The Editors
4 minutes
Share Tweet Email Print

The popularity of pictorial maps increased alongside the growth of tourism in the early- to mid-twentieth century. The maps below, which belong to University of Michigan’s Clark Library Maps collection, each depict the United States through a different lens, from folklore to national parks to food production. Some were made as a form of advertisement (see the Greyhound Lines map, or the Warner Bros. map for the film The Adventures of Mark Twain), while others are purely educational. We recommend clicking on an image if you’d like to take a closer look—some of these maps are absolutely packed with information! 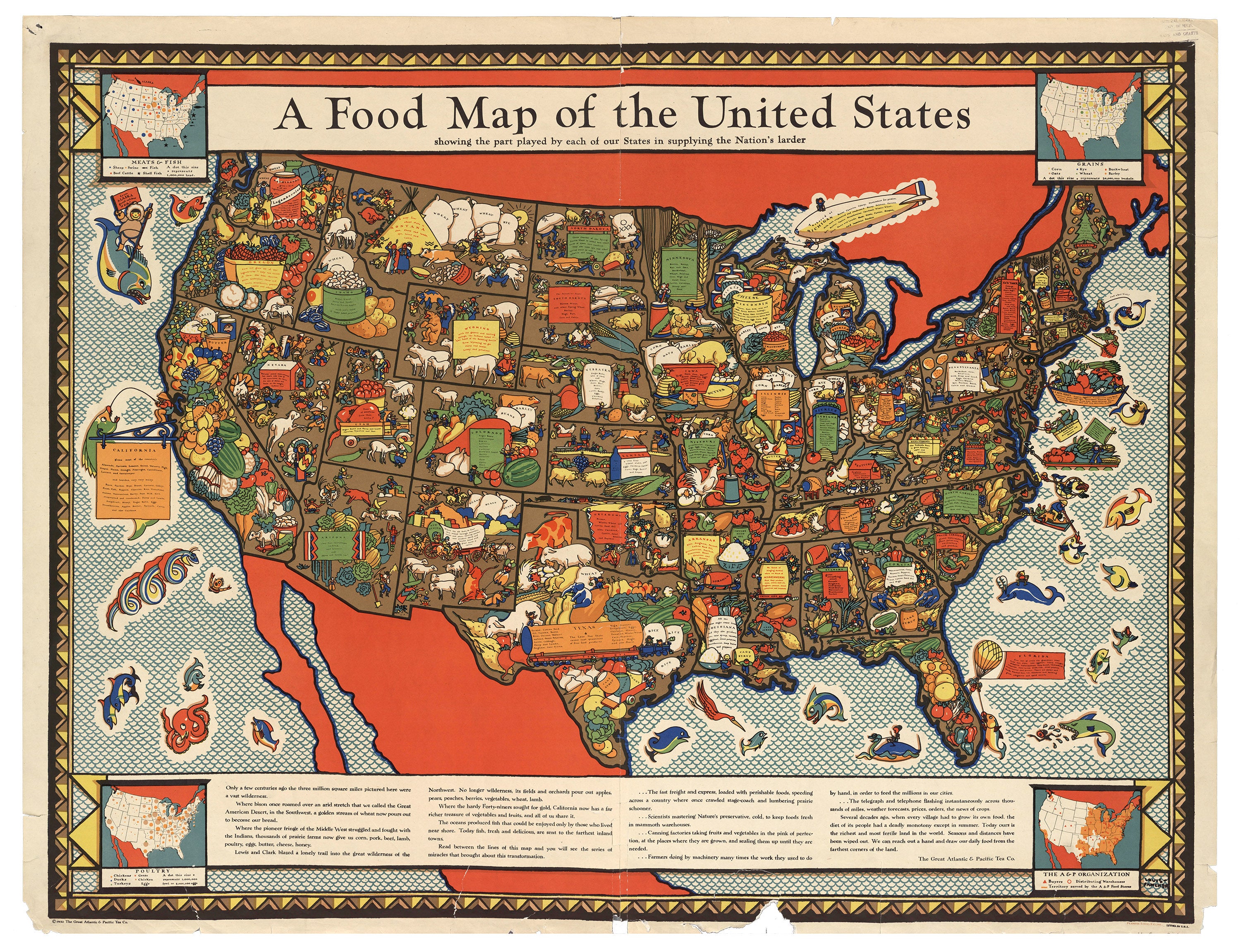 This food map of the United States was published by the Great Atlantic and Pacific Tea Company in 1932 and shows the part played by each state in supplying the nation’s larder. If you click through and zoom in close, you can even find a written list of foods in each state. 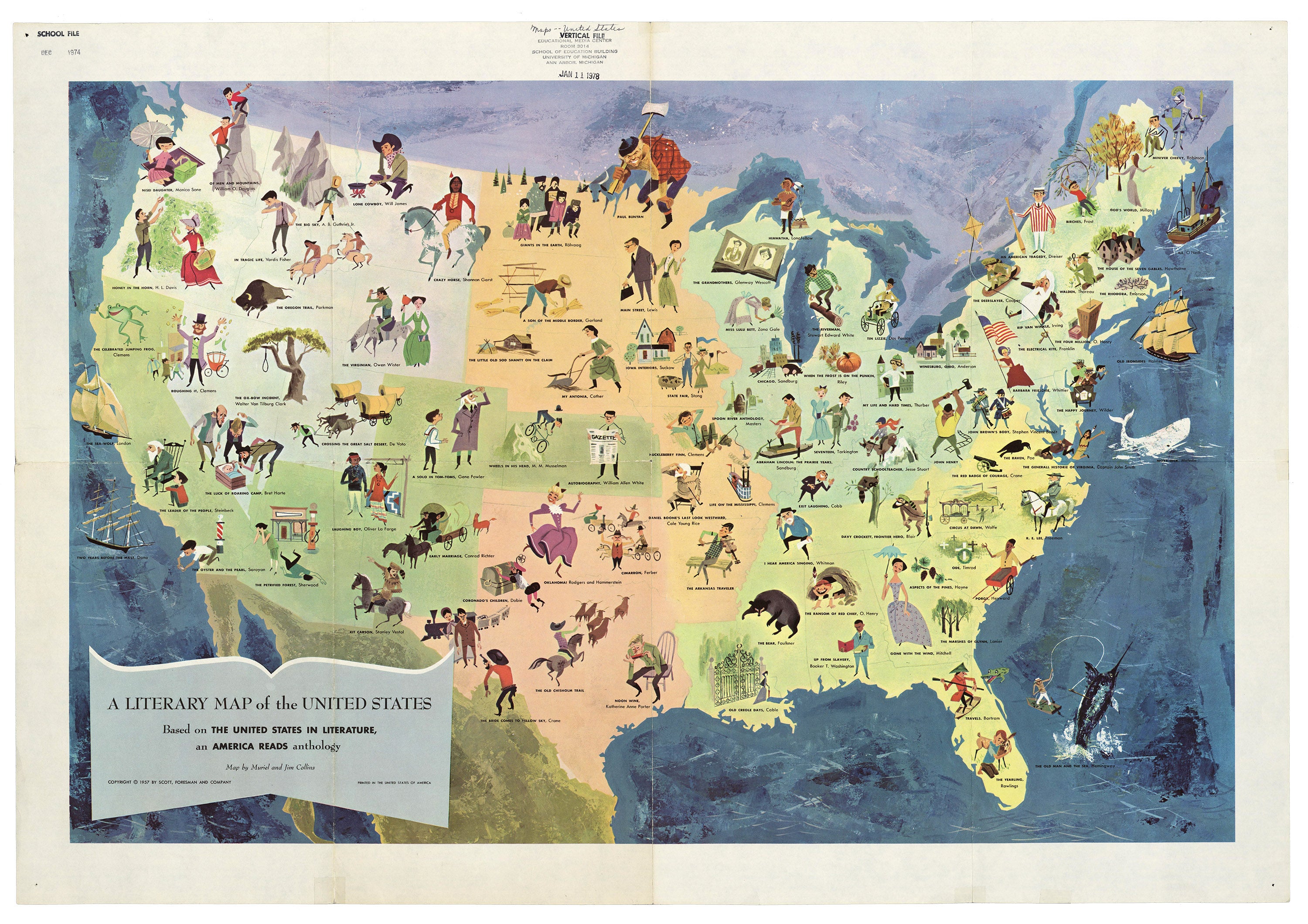 This literary map, published in 1957, is based on The United States in Literature, an America Reads anthology. If you zoom in, you’ll see “Birches” by Robert Frost in Vermont, The Oyster and the Pearl by William Saroyan in California, and much more. 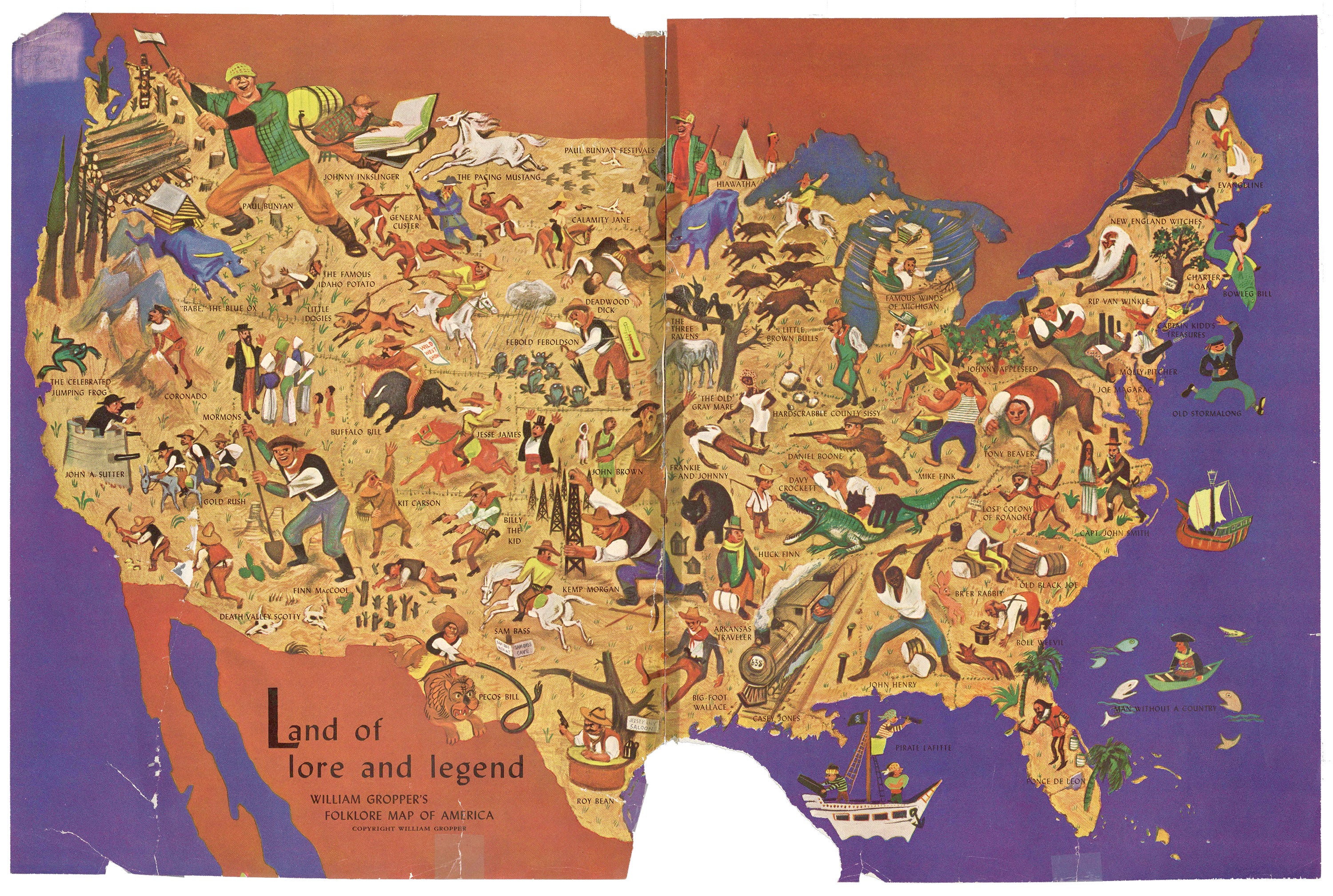 This map was made by William Gropper and published in Holiday magazine, September 1946. It features such folk legends as Casey Jones, Calamity Jane, and Kit Carson. Click on the image for a closer look. You can also find a profile of the artist on the following page. 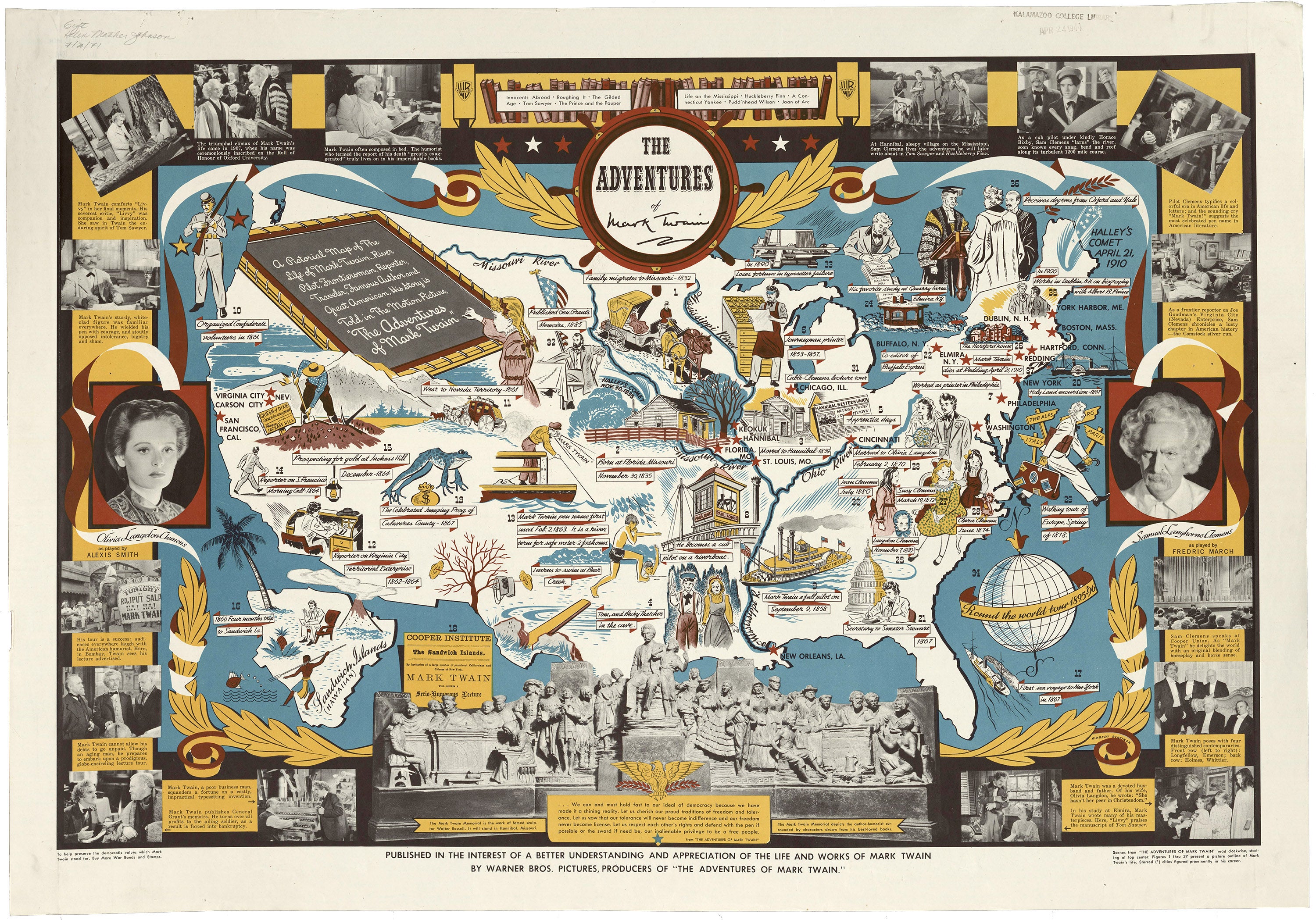 According to this map’s caption, it was “published in the interest of a better understanding and appreciation of the life and works of Mark Twain by Warner Bros. Pictures, producers of ‘The Adventures of Mark Twain.’” Published in 1944, it delivers on its promise, providing a wealth of information with both captioned photographs and illustrations. 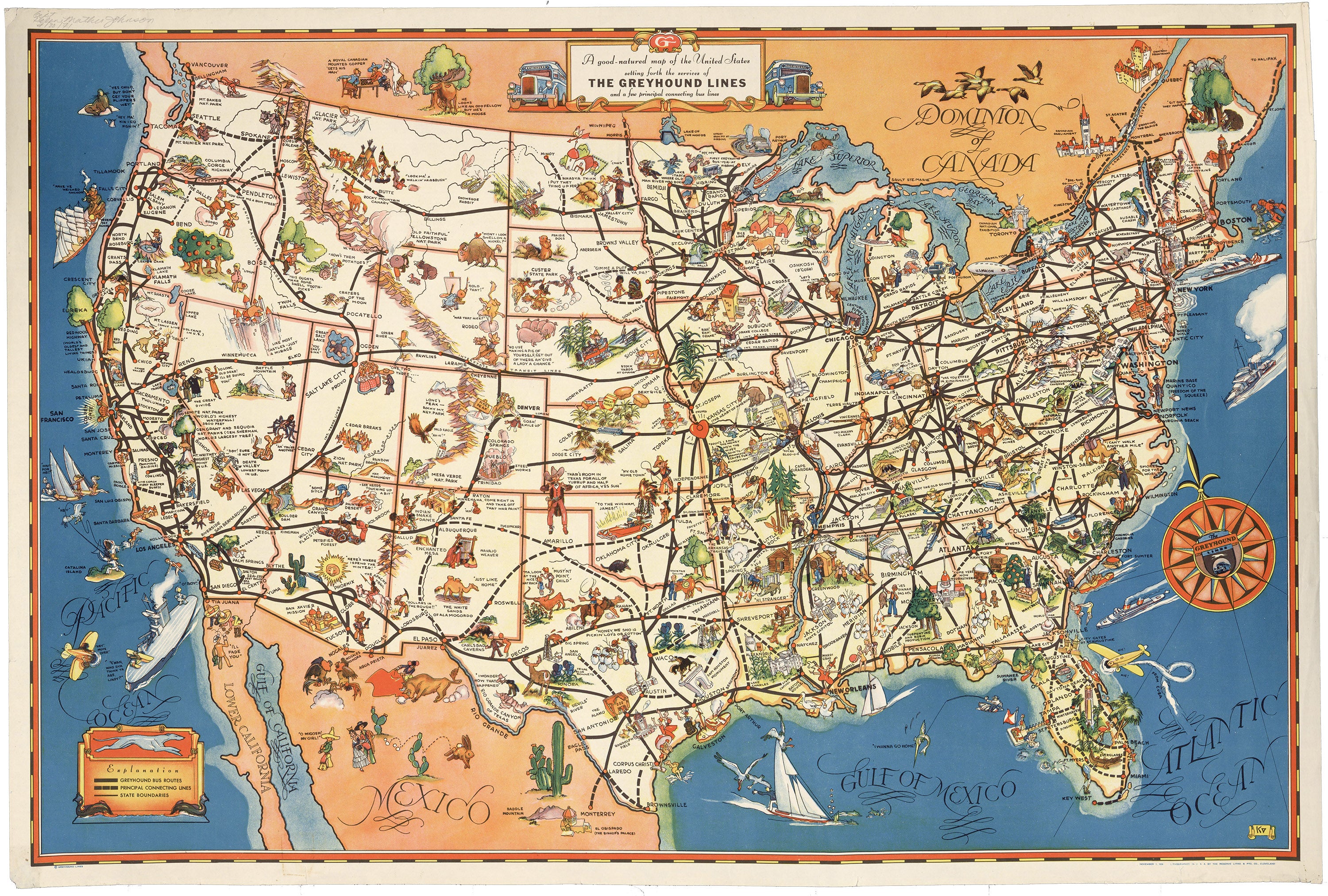 The primary purpose of this “good-natured” map is to simply delineate the Greyhound bus routes in 1934, the year it was published. But zoom in, and you’ll also find illustrations of Lincoln’s birth place, a rabbit wearing snow shoes, a German in Cincinnati, and more. This map of National Parks of the United States and Southern Canada was made by Maurice Freed and published in the 1950s by the Curtis Publishing Company. The map itself is composed entirely of images with an index of numbered National Park names. 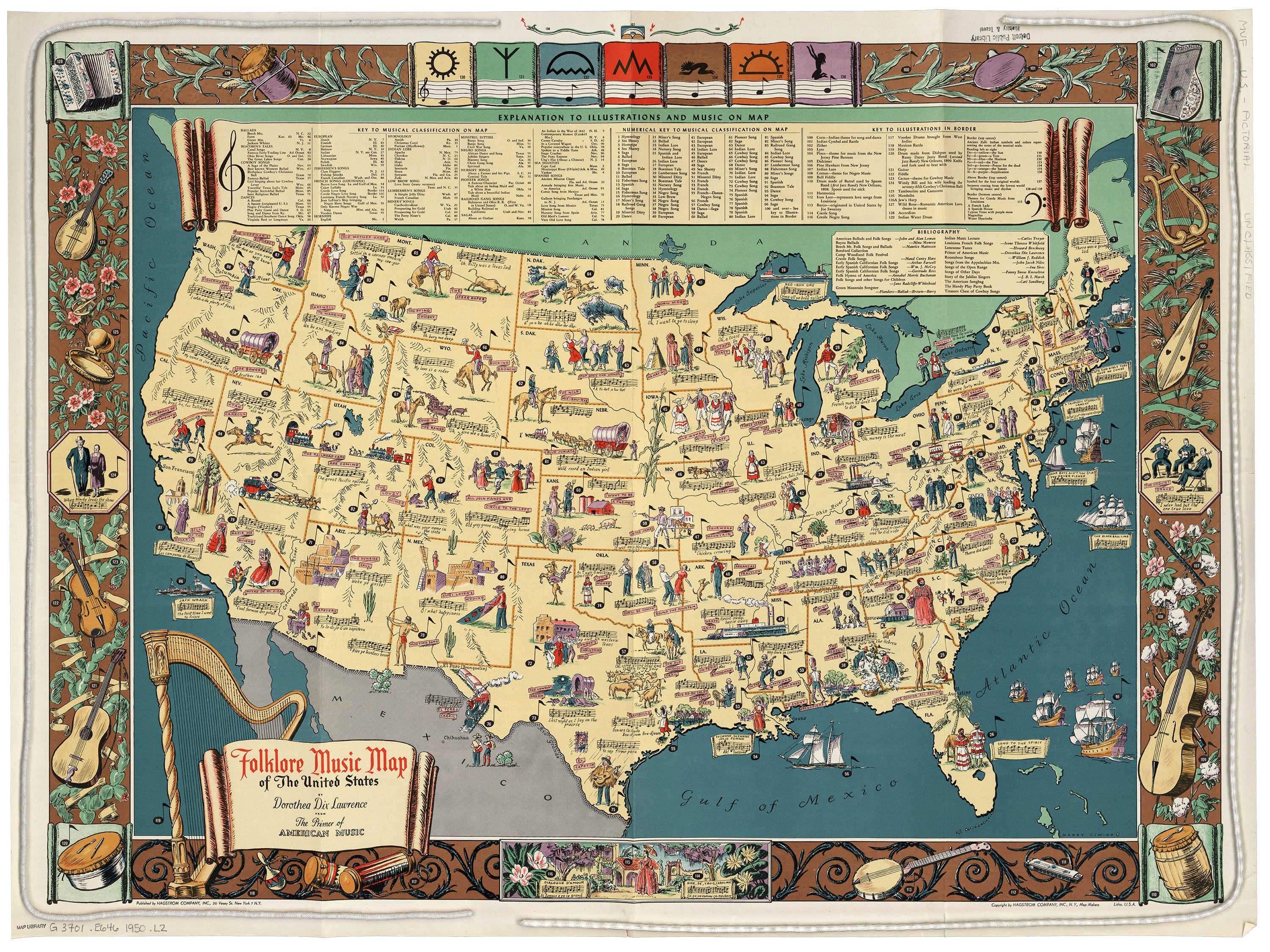 The Folklore Music Map of the United States was made by Dorothea Dix Lawrence and includes illustrations with an index of descriptions, as well as partial notations of every song. It was printed around 1950.