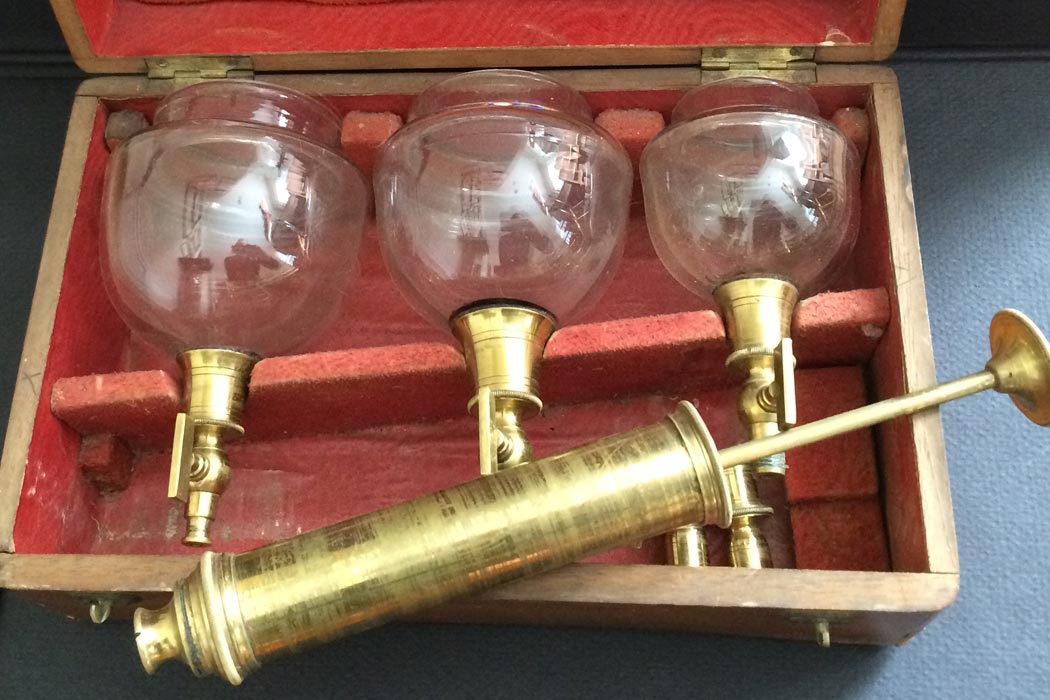 Paganini’s personal bloodletting set was made in Paris, circa 1820. The kit contains three domed-shape glasses with brass twist spouts and a brass scarification (scraping) tool, all housed in a discreet walnut box. It is “a most macabre relic,” according to Schubertiade Music & Arts, the Boston-based bookseller who will offer it for sale at the New York Antiquarian Book Fair, which opens on April 9. Until recently, the device remained with Paganini’s heirs alongside his opera glass monocle and a hat made from his mother’s wedding gown.

Medico-musicological studies were once quite popular. The medical histories of famous musicians and composers correlate illness with genius. They even attempt, in some cases, to posthumously diagnose diseases.

So what pained Paganini? Physically, he was pale, gaunt, and long-limbed. He possessed unusually flexible joints and, when he stood on stage, jutted out his hip in a way that made his body appear crooked and ungainly. Through the years, the list of his proposed ailments has included syphilis, gonorrhea, tuberculosis, colitis, chronic laryngitis, Marfan syndrome—President Lincoln’s assumed disorder—and Ehlers-Danlos syndrome, not to mention mercury poisoning from the prescribed remedies of the period.

Niccolò Paganini dazzled audiences but he also alarmed them. The “vampire virtuoso” was deeply interested in bloodletting.

Born in Genoa, Paganini was always sickly, but his parents encouraged his musical talent, first with mandolin lessons at age five and then the violin at age seven. He was a child prodigy turned court musician to Élisa Bonaparte Baciocchi, the Grand Duchess of Tuscany, but he relinquished that position in order to embark on a concert tour around 1809. On the road, he earned a reputation for gambling, womanizing, and other unseemly behavior. In 1814, for example, he impregnated a prostitute and then forced her to drink a concoction meant to cause the stillbirth of the fetus. That landed him in prison on charges of abduction and rape, but only for eight days. As for his own health, it was taxed by his concert schedule, his sensational and strenuous performances, peppered as they were with wild shrieks and deliberately broken strings. He played the rock star. So perhaps it’s no surprise those in the syphilis camp believe he contracted venereal disease around this time.

Weakened by numerous and unspecified infirmities, Paganini began dabbling with purges, diets, and doses of opium and mercury. One of his favorite purgatives was Elixir Leroy, a plant-based laxative touted by Jacques Agathange Le Roy, who published his pseudo-medical treatise, Essai sur l’usage et les effets de l’ecorce du garou (Essay on the usage and effects of the bark of the garou bush), in 1767. The violinist constantly sought antidotes for his many ills. “He went nowhere without his doctor,” writes art historian Nina Athanassoglou-Kallmyer. “His prescriptions and medical bills have been compiled into a voluminous archive. He even concocted his own remedies and tried them on himself and his friends.”

Exactly when he began therapeutic bloodletting, however, is unknown. According to rare-bookseller Gabe Boyers of Schubertiade Music & Arts, it may have been as early as 1796, in Parma, when young Paganini presented symptoms of pneumonia and the doctor drained him. The treatment seemed to weaken the wunderkind, but in his period of recuperation, he still practiced his instrument 10 or 12 hours daily.

Bloodletting, or phlebotomy, was a common medical treatment for at least 3,000 years. From early civilizations to the Middle Ages and into the Renaissance, physicians subscribed to the theories of Hippocrates, who proclaimed that an imbalance in any of the four basic humors—blood, phlegm, black bile, and yellow bile—caused sickness. Therefore, removing the excess substance via emetics and bloodletting would restore the body to healthy harmony. Or so philosophers, surgeons, and barbers presumed. Charles II (1630–1685) and George Washington (1732–1799) might disagree. After a seizure, Charles endured massive bloodletting, enemas, and other purgatives before succumbing. Washington, feverish and suffering from an inflamed throat, was blistered and bled of five pints—about half his total blood volume—over 12 hours while in the care of three eminent doctors. His death was said to be agonizing.

Even at the time, critics complained that Washington’s physicians did more harm than good in draining too much blood, but humoral physiology was the standard well into the 19th century. “Bloodletting reached the height of its popularity between 1825 and 1835, particularly in Europe,” write nurses Salena M. Wright and Jean Finical. There were three main methods for drawing blood. The most productive (and dangerous) was venesection, the opening of a vein with a lancet or fleam, typically the median cubital vein at the elbow. More localized bloodletting involved scratching the skin with a scarification tool and then using heated cups to suction the bad blood from those slight incisions. Leeches were yet another technique, and in fact, one of Paganini’s contemporaries, French physician François Broussais (1772–1838), was a proponent of medicinal leeches.

It’s obvious from Paganini’s own bloodletting set that he favored “cupping.” His brass-and-glass apparatus contains suction cups and a cube-shaped box that holds multiple small knives. He would scrape until he bled and then place the glass cups over the cuts and extract the air, either by pressure or prior heating. Less risky than a lanced vein, cupping left painful welts on the skin. For a man who seemed to hurt as much as he did, it’s no wonder he required his own medical implements for bloodletting on the go, while touring Europe’s concert halls. And yet, the underlying sadism involved in this repeated, self-inflicted anguish begs us to consider the lore of Paganini as “demonic”—a vampire virtuoso.

Paganini dazzled audiences but he also alarmed them. His long hair and lankiness marked him as an oddity, but his feverish bowing was even more suspect. “While musical progressives applauded him, tradition-bound classicists decried Paganini, regarding him at best as a madman, at worse as a dangerous revolutionary,” writes Athanassoglou-Kallmyer. A notion seemed to bubble in the popular mind: Was he possessed? Quite aside from the fiddle’s connotation as a devil’s instrument, there were rumors of a pact with Satan in exchange for his exceptional musical ability. He was referred to as a “magician,” “wizard,” “hexensohn” (son of a witch), and “sorcerer,” among other appellations. According to Athanassoglou-Kallmyer: “Wild and terrible rumors surrounded him like a magic aura.” Contemporary illustrations of him, caricatures really, depict him in a sinister way—ugly, angular, fiddling a jig for skeletons.

Paganini had little interest in changing his morbid image. In fact, he seemed to encourage it. He undertook a series of 10 concerts in Paris in the spring 1832, while a cholera epidemic swept the French capital. “Paganini craved proximity to the sites of infection,” writes Athanassoglou-Kallmyer. In the public mind, the pallid musician was the “live embodiment” of cholera. He never contracted the bacterial infection—it was one of the few maladies he managed to avoid—but many did, and about 20,000 died in Paris alone.

In Paris and elsewhere in Europe, Paganini further beguiled the public by sauntering through graveyards and visiting hospitals and autopsy rooms. Clad in his black cape, he would sometimes serenade the dead and the gravely ill. Interpreting these bizarre deeds, in light of what we know about his delicate health and his shadowy reputation, is the work of historians of both art and medicine. Did he sympathize with the sick? Were these acts part of an elaborate pretense to amplify his fame? Or were his risky recitals amid the cholera outbreak merely another mode of self-harm?

Paganini did seem to take “devious pleasure in self-inflicted suffering.” In another feat of self-torture or punishment, the violinist voluntarily had all of his teeth yanked out—a further blight on his already eccentric appearance and another source of affliction. No doubt his teeth had been loosened and decayed from prescriptions of mercury-based medicines.

The fact that he turned, at some point, to phlebotomy as a treatment—engaging in bloodletting so frequently as to require a travel-sized kit—is therefore unsurprising. Not only was he desperately seeking to recuperate from a host of known and unknown ailments (and their poisonous cures), he was capable of taking the knife to himself, perhaps even deriving gruesome pleasure from it.

The maestro died in Nice in 1840, aged 57. His physical condition had not improved in his later years; there were digestive complaints, vision problems, vocal injuries, and tremors. Scholars still debate what actually killed Paganini. (The cast of his right hand, for example, is an item of interest among those who champion Marfan over tuberculosis.) His personal bloodletting set, passed down by Paganini’s son Achilles to his eldest son, Andrea, cannot resolve the virtuoso’s cause of death, but it does offer a very private view not only of the man behind the myth, but of the medicine behind the man. 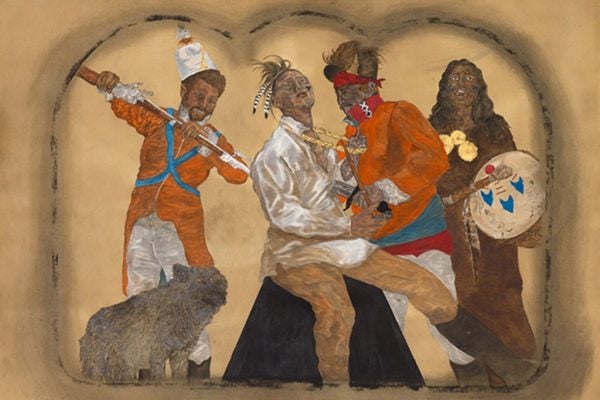 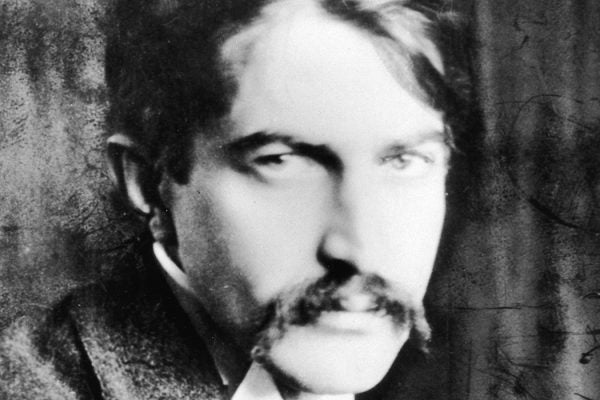