In the Journal of American Studies, Amanda Frisken investigated how an earlier set of standards around obscenity emerged in the 1870s.

Facebook recently released new, clarified policies on “community standards,” reflecting a basic consensus on what kinds of speech and images are unacceptable in the modern American public square. Nudity, sadistic violence, and hate speech are lumped together as unacceptable.

In a 2008 paper for the Journal of American Studies, Amanda Frisken investigated how an earlier set of standards around unacceptable speech emerged in the 1870s. Frisken traces the ways that Victorian anti-vice crusader Anthony Comstock changed American culture far beyond curbing the smut peddlers of his time.

Way before Facebook, an earlier set of standards around obscenity emerged.

Comstock was the force behind landmark 1873 legislation banning obscene literature that became known as the Comstock Law. Through threats of prosecution and behind-the-scenes negotiations with publishers, he helped shape the boundaries of public discussions of sex.

In response to Comstock’s threats, in 1873, one sensationalistic newspaper, The Days’ Doings, pulled advertisements for divorce lawyers, venereal disease cures, abortifacients, and illustrated “marriage manuals.” It also eliminated drawings reproducing nude statues and paintings, as well as illustrations of middle-class women that revealed as much as an ankle.

In place of those sources of titillation, the paper published accounts of frontier violence and illustrations depicting nudity among less privileged women. Comstock’s “vigilance shielded from public view some white women’s ankles, but not the outlines or even frontal nudity of poor or racially distinct women,” Frisken writes.

Another paper, the Police Gazette, apparently found an exception to Comstock’s ban on sexual scenarios in depictions of the rape of white women by black men.

“Significantly, these racialized re-enactments did not provoke the censor, perhaps because they carried an implied justification for controlling black men, and even explicitly condoned or celebrated lynching as an appropriate response,” Frisken writes.

Along with shaping the forms that sensationalism could take, Comstock indirectly molded the positions his opponents ended up adopting. Frisken writes that many liberal and even radical thinkers of the time agreed with Comstock that commercial depictions of sexuality could be a threat to morality and the public good. To Comstock, though, the definition of obscenity was much wider, including even educational materials about the human reproductive system biology.

At first, reformers hoping to spread information about sexuality argued that their educational agendas differentiated them from “vile” commercial publications. But as Comstock arranged the arrest of social reformers on obscenity charges, some liberals reluctantly turned to “the radical individualism of the free press position,” deciding that obscenity was too subjective a concept to legislate.

“In six years, Comstock’s zeal fractured an unspoken consensus about the nature and dangers of commercial sensual publications,” Frisken writes.

Ultimately, because commercial publications were willing to alter their content to avoid prosecution, while advocates of education were not, scientific knowledge of sexuality was driven from public view. That left the racialized, sensationalized representations of the popular press as the main source of sexual information for many young people for decades to come. 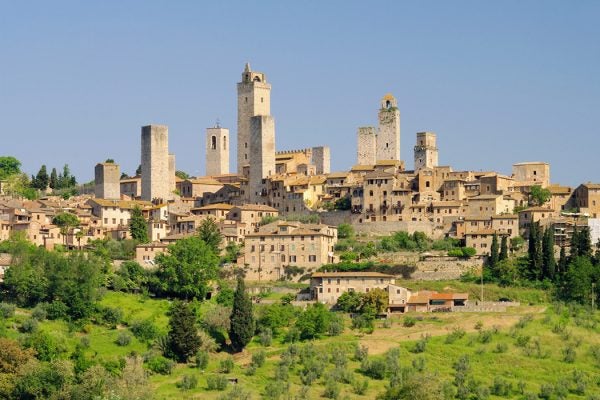 The politically-influenced redesign of the famed towers of San Gimigano.