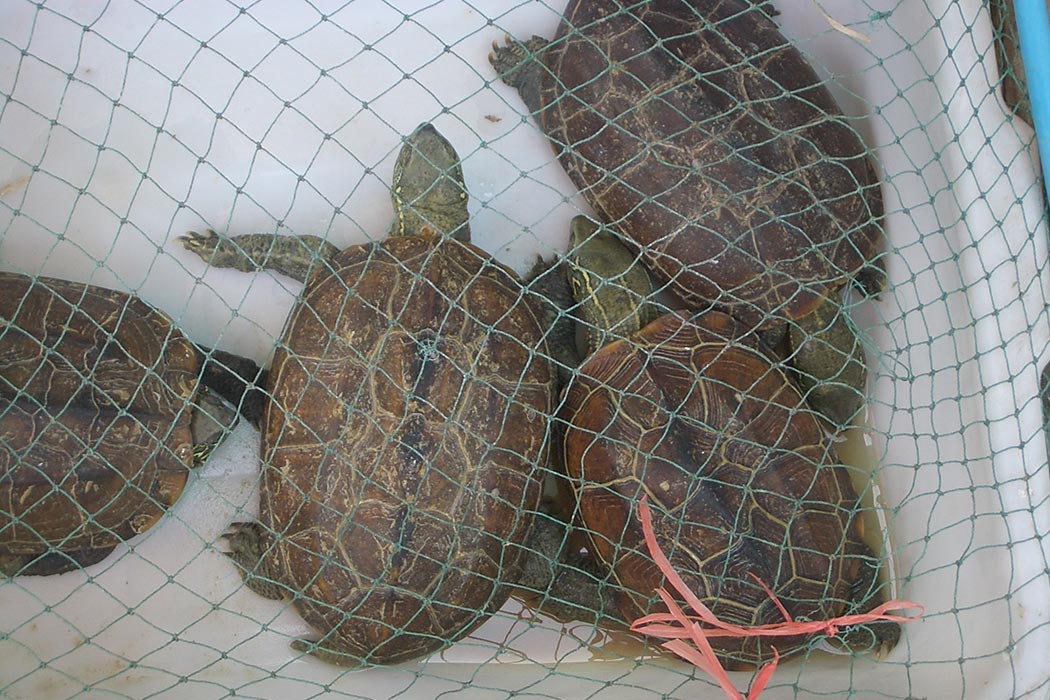 In September, customs officials stopped Canadian citizen Xu Gai trying to fly to China from Detroit with nearly 1000 live turtles in his luggage. Incredibly, Mr. Xu had been caught just a month earlier trying to enter Canada with 51 turtles crammed into his pants. Why would somebody be willing to stuff their clothes with turtles? And what made him so cavalier as to try again almost immediately after being caught? The answer is a lucrative underground market in wildlife that frequently runs unchecked.

As with any underground economy, the scale of the illegal wildlife trade is difficult to measure, but is estimated at up to $10 billion in a 2009 article in Natural Resources & Environment. Illicit wildlife products are valued for many reasons, from “traditional” medicine or exotic food to decoration or even pets. Some of the trade is inadvertent, conducted by ignorant tourists, but much is the work of organized crime. These groups already have networks to transport contraband, and the risk is seen as low. The largest markets for wildlife products are China followed by the United States, so it is no surprise that Mr. Xu was headed from one to the other when he was caught.

With consumers willing to pay top dollar for wildlife products, it’s no surprise that this illicit trade is entrenched. But why is it so difficult to stop? Part of the reason is the multiple jurisdictions involved. Poorly paid border authorities in developing nations are no match for organized and well-armed smuggling organizations. To combat this, the U.S. State Department is working with partner nations in Southeast Asia and other places to increase local effectiveness against smugglers. Outreach efforts aim to educate consumers about wildlife products and steer them toward legal alternatives.

Despite these efforts, far too much of the trade goes unpunished, and the problem is structural. One of the most important international agreements governing the wildlife trade, The Convention on International Trade in Endangered Species (CITES), does not provide any built-in funding or enforcement mechanisms, leaving implementation up to the will of signatory nations. Even in the United States, penalties under CITES can be light, and the treaty does not address species that are not specifically listed, such as most of the turtles in Mr. Xu’s pants. As a result, prosecutors rely on other U.S. laws, such as the Endangered Species Act or the Lacey Act (which regulates importation of wildlife and plant products), although these often fall short as well . The harshest penalties come from general laws against smuggling, and under those laws Mr. Xu is now facing up to 10 years in prison.

Ultimately, the patchy efforts to counter wildlife smuggling are contributing to global declines in biodiversity and the damage does not end there. Given overlap in criminal networks, people who smuggle wildlife just as easily smuggle weapons or drugs. It’s an unfortunately small step from illegal wildlife harvest to murder, and many smugglers have been involved in horrific crimes, even genocide. A comprehensive effort against the wildlife trade would accomplish far more than rescuing some turtles.