Fred Rogers argued by example and in his quiet, firm way that television’s power could be harnessed to shape future generations for good. 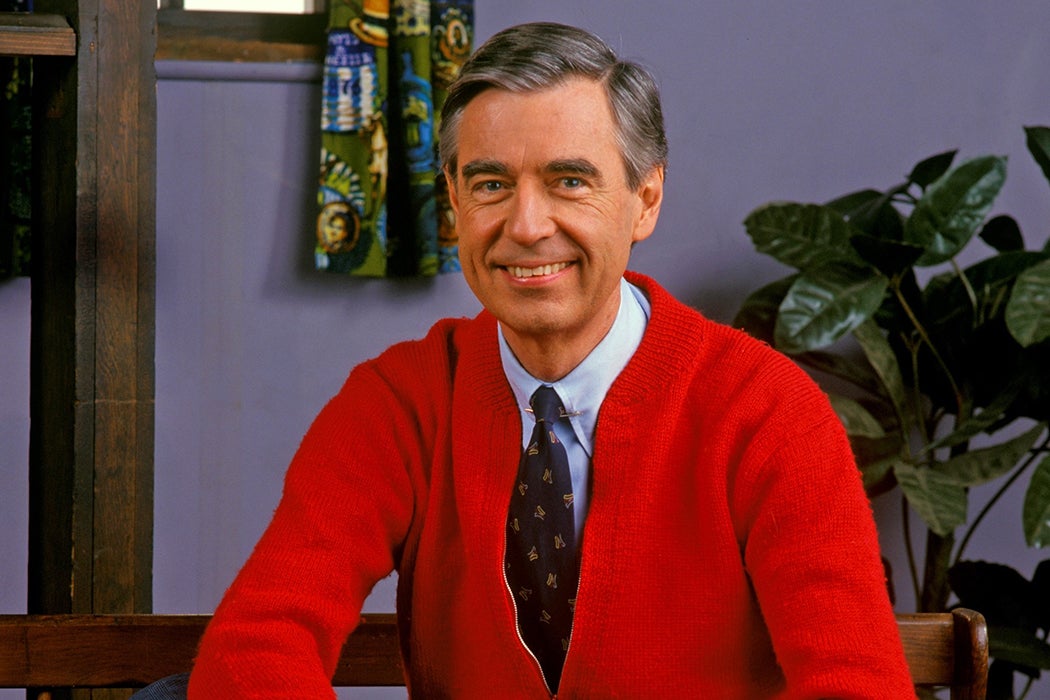 In 1969, when a second season of the popular year-old children’s TV show Mister Rogers’ Neighborhood was threatened by a funding pinch, children nationwide sent in rolls of pennies and single dollar bills totaling almost $4,000 to save the show. Among Fred Rogers’ tiny supporters was a 5-year-old Miami girl who told a Herald reporter that the humble, singing host in his trademark cardigan “teaches us things!” When asked what Rogers taught her specifically, she replied with characteristic preschooler candor, “I don’t know. But I love him!”

This tot’s bewildered devotion captures the long-running affection for Rogers and the show, which debuted to a national U.S. audience 50 years ago. But it also captures some of the contributions of—and controversies about—the show. Rogers, the former Presbyterian minister turned one-time NBC news assistant, was on the vanguard in promoting public television. He brought attention to the emotional lives of children and an imaginative vision of a country that looked more like his friendly neighborhood than the United States in 1968, a time marked by civil unrest and questions about what racial equality and civic responsibility looked like.

While Rogers became a fixture for generations of children and families, public television—and children’s programming on public television—were largely unknown quantities at the outset. Americans were buying more and more televisions, but public television was a new idea, with the Corporation for Public Broadcasting having just been created months before Mister Rogers’ Neighborhood premiered. Its flagship show, Sesame Street, would follow in 1969.

In public television’s infancy, the medium found itself challenged by naysayers who questioned its value and, importantly, its funding.

Before Mister Rogers’ Neighborhood came The Children’s Hour, on the nation’s first community-owned television station WQEH. According to the cultural historians Robert Levine and Laurie Moses Hines, school systems in Pennsylvania began exploring the idea of using the small screen in classrooms. A fortuitous grant allowed the station to move forward with a dedicated children’s hour, in which Rogers did a segment introducing some of the puppets and characters that would animate his future show. They included the haughty King Friday, who substituted long words for simple ones in childhood songs such as “Twinkle, Twinkle Little Star;” curious X the Owl; and the vain Henrietta Pussycat, whose vanity provided a lesson in character education.

In public television’s infancy, the medium found itself challenged by naysayers who questioned its value and, importantly, its funding. Rogers, whose carefully cultivated milquetoast TV persona belied a steady eye on politics, went on the defensive. Just a year after his show hit national airwaves, Rogers testified before Congress about the social necessity of public television.

Key to Rogers’ approach was the idea that a healthy child should play, feel, and be able to inhabit a Land of Make-Believe where creativity reigned, emotions could be discussed, and supportive adults listened. It was the quintessential modern interpretation of Progressive-era ideas that children were, in fact, different from grown-ups, and need a gentle-but-firm hand for guidance. Rogers also subscribed to a school of thought that proper behavior—marked by being in touch with one’s feelings and thinking about others’—could be taught. For every emotion, there was a strategy to deal with it. When you are angry, Rogers told his young charges, you don’t have to knock somebody down.

“There is an almost total disregard for the inner needs of children,” Rogers said during his 1969 acceptance of a Peabody Award for outstanding children’s programming. “For instance, when a 3-year-old sees a cartoon animal with big teeth, he focuses on the teeth because he happens to be in a stage where he thinks a lot about biting. Our program is based on development tasks children need to focus on.” And for those who complained of his show’s slow pace and storylines, he added, “I feel that drama comes from within.” Even performing the simplest task such as taking a bath, a child might fear that she would get sucked down the drain along with the water.

But not everyone agreed that television could be a teaching tool. From the moment of its inception, television had champions who touted its potential and detractors who worried that the technology could influence public opinion and the minds of American youngsters. The American Federation of Teachers shared its skepticism in a unanimous resolution that “we are unalterably opposed to mass education by television as a substitute for professional classroom techniques.” As late as 1976, when Mister Rogers’ Neighborhood had been on air for almost a decade, education professor Rose Mukerji described the help-or-harm debate about youth and television as a “checkerboard scene” of cases for and against. Anti-TVers cited concerns about on-screen violence and questioned the assumption that television programming could make children “pro-social” and better acclimated to the world around them.

More than any other television booster, Rogers argued by example and in his quiet, firm way that television’s power could be harnessed to shape future generations for good.

Researchers tried to test Rogers’ idea of television as a social good, using his own show as subject. Scholars cranked out study after study to investigate whether hanging out in Rogers’ neighborhood positively affected children’s development. One 1976 study found that children who watched Rogers’ show were more likely to praise and interact with other kids and adults soon after viewing an episode. But like many TV shows that critics and scholars examined, there was no one verdict on whether Mister Rogers’ Neighborhood indeed made children more amiable with their friends or fellow community members in the long run.

Over the course of its decades on U.S. television, Rogers’ show was beloved by some and panned by others, like the education researcher Valerie Polakow Suransky. Was childhood being over-studied? Could play simply be play and not an instructional moment, she asked, and turned her sights on Rogers.

“Mild-mannered and middle-aged, Mr. Rogers is often too good to be true. He carefully wipes his feet before entering a home, is unfailingly polite, and gently encourages a ‘let’s talk about it’ approach. Mr. Rogers’ neighborhood is small, perfect, and unreal—as unreal as the laboratory experiments in which social learning theorists develop strategies to shape the learning processes of captive children.”

Suransky was right that the landscape of Rogers’ neighborhood—where people followed rules and were talked to gently when they didn’t, where the omnipotent host assumed the best of intentions—was as much fantasy as reality.

And so was Rogers’ little-discussed creation of a multiracial neighborhood, which didn’t look like the segregated cities where racial prejudice would erupt in dozens of urban uprisings in 1968.

In the fourth episode of the first season, Rogers introduced Mrs. Carol Saunders, a black teacher. Though the character was introduced without ceremony or fanfare, it was notable that she was referred to with the “Mrs.” courtesy title that many whites denied to African-American women. She was a feature of the first two seasons, sometimes towing a racially diverse group of students—at a time when U.S. schools were struggling to desegregate, resisting the process, and also trying to diversify their teaching staff. Her appearances were included as a matter of course, with no reference to residential or school desegregation.

Later in the show, Rogers also introduced another regular black character, real-life cop Officer Clemmons, with whom Rogers shared a plastic wading pool on-screen. Again no mention of conflict over making public facilities—including previously white-only swimming pools—available to people of all races. But Rogers could not have been oblivious to the vitriolic battles over public spaces and swimming pools, which unfolded even in his (theoretically unsegregated) home state of Pennsylvania.

Rogers created a neighborhood that was united by values and seemingly impervious to racial animus and urban crisis, a neighborhood that fit better in his imaginary world than in the actual one inhabited by the millions of Americans who tuned in. He created a Neighborhood of Make-Believe that children could enter through a magical trolley ride and the flights of their own imaginations. But in his imagination, there was a place where a code of compassion ruled, where conflicts were few and resolved quickly, and where it was possible to welcome every person as a neighbor. 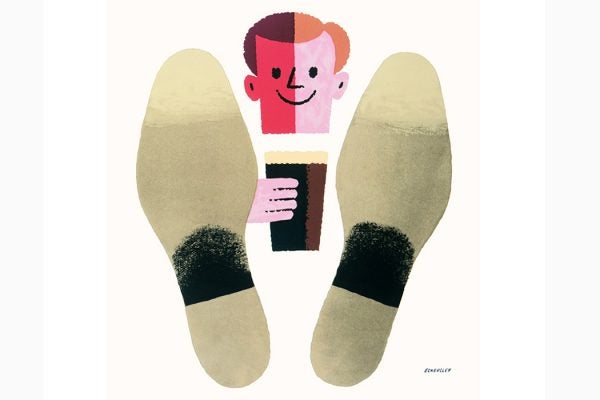 Why We Drink Guinness on St. Patrick’s Day

Unlike shamrock pins and green beer, Guinness drinking really is a longstanding tradition in Ireland.