Knowledge and Nostalgia at the Museum: From The Mixed-Up Files of Mrs. Basil E. Frankweiler

From the Mixed-Up Files of Mrs. Basil E. Frankweiler imagines the museum as a site of hands-on learning and intimacy with the past. 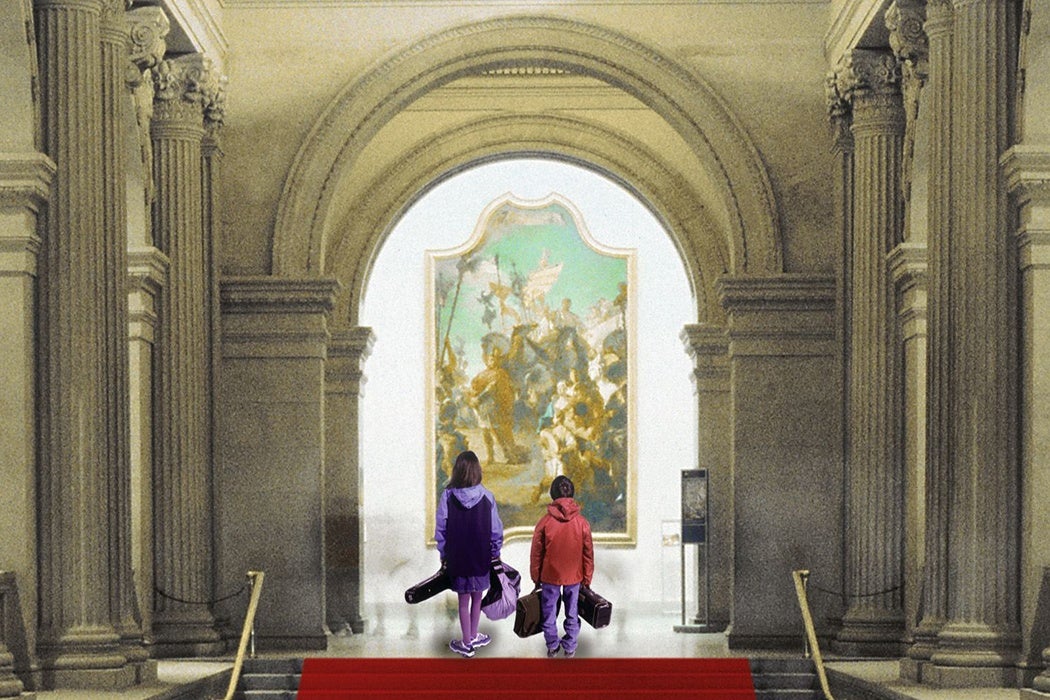 E.L. Konigsburg’s children’s novel From the Mixed-Up Files of Mrs. Basil E. Frankweiler turns 50 this year, and it’s aging well. The book tells the story of two kids, almost-12-year-old Claudia and her nine-year-old brother, Jamie, who run away from home to live at the Metropolitan Museum of Art in New York City. Reimagining the space of the museum as a site of mystery, adventure, and personal transformation, The Mixed-Up Files has captivated readers young and old and across generations.

I read The Mixed-Up Files on my own as a kid, and I learned so much: about grammar (one must never double up one’s prepositions, according to Claudia) and about Michelangelo, who may have been the artist behind the (fictional) angel sculpture purchased by the Met for an outrageously low $225. I can also thank this book for the many years during which I mispronounced the city of Bologna as “baloney.”

The Met was free-free, a bus ride cost 20 cents, and Sunday brunch could be enjoyed for under a dollar.

Due to its connections to art, art history, and social studies, the novel has been popular among elementary and middle-grade teachers throughout its 50 years. As Helen Gerretson and Bárbara Cruz point out, it also provides exciting connections to math. Claudia has chosen Jamie over her other brothers as partner in crime primarily because of his money management skills: He is a “cheapskate” and shrewd budgeter, and when they embark on their adventure, he has an impressive $24 in savings.

“There’s something nice and safe about having money,” Claudia reflects after they’ve spent all Jamie’s savings. In fact, the book is deeply obsessed with money, with most transactions carefully considered and recorded. While this obsession forges a familiar through line between New York then and now, it also provides a fascinating look back to a time when the Met was free-free, a bus ride cost 20 cents, and Sunday brunch could be enjoyed for under a dollar. Indeed, to revisit the book as an adult is to sink into nostalgia not just for a more innocent, wonder-struck youth but also for what seems like an absurdly affordable New York.

People joke about homes that are as cold as museums; Konigsburg gives us the fantasy of a museum as home. After a few days at the Met, Jamie remarks, “I think we ought to be homesick.”

This prompts a brief philosophical meditation on the nature of homesickness, which concludes with Jamie’s understanding of homesickness as “like sucking your thumb. It’s what happens when you’re not very sure of yourself.”

As psychologists Constantine Sedikides et al. explain, nostalgia was for a long time equated with homesickness. Understood as a negative affect, nostalgia has, at various points in history, been constructed as a medical disease and a psychiatric disorder.

Claudia and Jamie experience none of the painful suffering of this kind of homesickness: Their lives at the Met are altogether too exciting. Here they are, living in an enormous and grandiose estate, bathing in the magnificent Fountain of Muses; sleeping in a royal, albeit musty, bed in the hall of the English Renaissance; coming face to face with a thrilling art-historical mystery.

“It’s really their fault,” Claudia says, speaking of her parents, “if we’re not homesick.”

Though still often discussed in negative or dismissive terms, nostalgia is now more broadly seen as “a sentimental longing for one’s past.” New studies suggest its many positive effects: For example, nostalgia may enhance positive self-regard, strengthen social bonds, boost optimism, and “facilitate continuity between past and present selves.” In short, according to Sedikides et al., nostalgia “imbues life with meaning” and may be “a fundamental human strength.”

Claudia and Jamie long for the deep human history they can only access at the museum.

In their wide-eyed yet pragmatic explorations of the Met, our two heroes manifest not homesickness, but a sentimental yearning for a past that is not theirs. A trans-temporal nostalgia if you will: They long not for their own individual pasts, but for the deep human history they can only access and interact with at the museum. Well, that, and a home away from home.

If the museum is defined, as Thomas Schlereth argues in a 1984 commentary on museum education, as “a site where people learn about people (including themselves) primarily through objects that people have made, used, or found meaningful,” then the museum is a fundamentally educative space: a space where learning happens through physical encounter.

How museum visitors acquire object knowledge is thus a key issue in museum studies, particularly museum education. During their time at the Met, Claudia and Jamie encounter one of several classes of elementary school children on a field trip. As the teacher talks, perched on a folding stool, the young learners sit on “little rubber mats” gathered around a mummy, a top-down learning structure.

Our protagonists’ own museum education is self-driven and decidedly more interactive. On their first full day in the museum, Claudia tells Jamie they must take advantage of their opportunity as new residents of the museum; she sets forth “the task of learning everything.” As it happens, most of their education comes from living adjacent to, and interacting with, historical objects. They sleep in the bed where Amy Robsart, first wife of Lord Robert Dudley, lover to Queen Elizabeth I, was allegedly murdered. (The cause of her 1560 death remains subject to debate centuries later.) Claudia hides her violin case in a Roman marble sarcophagus, and Jamie stashes his trumpet case in a large decorative urn. Both instrument cases will be found by security guards a week after the children return home, these abandoned contemporary objects brushing against history to become mysterious artifacts in their own right.

Soon Claudia’s “task of learning everything” gets abandoned when she encounters the newly arrived angel statue, whose origins are unknown. Where did this curious angel sculpture come from? Was “she” created by Michelangelo, and how can attribution be proved? Claudia becomes enthralled and infatuated with the statue and its mysteries.

“I wish I could hug her,” Claudia tells Jamie. “When you hug someone, you learn something else about them. An important something else.”

“What kind of scientist would want to hug a statue?” Jamie retorts. Perhaps a queer historian. Indeed, such a hug would literalize Carolyn Dinshaw’s notion of queer history as a “touch across time.” This queer way of doing history aims to forge “affective relations across time.”

Claudia doesn’t hug Angel—largely for fear of setting off security alarms (notwithstanding the logical inconsistency of the violin case in the sarcophagus). Yet her idea is provocative: that touching art—touching history—can produce new knowledge, “an important something else.” In this way, The Mixed-Up Files imagines the museum as a refuge and a site of not only art and historical knowledge but self-knowledge and queer intimacies with the past—albeit in a no-touching zone.

(Meanwhile, in 1982, to the right and around the corner, through the Egyptian Art and past the Temple of Dendur, Liza and Annie of Nancy Garden’s groundbreaking lesbian novel Annie on My Mind, are meeting for the first time. Here they are in the American Wing, in the colonial rooms. Not touching. Yet.)

Reading itself invites a touch across time, and revisiting this novel, 50 years later confronts us with quite a lot of change. Taking the Met as a case in point: The bed where Claudia and Jamie slept has since been dismantled, and the fountain where they shower while collecting coins is no longer there. The $25 suggested admission may soon be required. Moreover, as Konigsburg notes in her afterword to the 35th anniversary edition, advances in technology have made manual typewriters and card catalogs virtually obsolete.

Then again, there’s plenty of continuity, too. A bus ride might cost $2.75 now, but the Met is still standing, on the same block, with the same general layout (plus significant additions, including the opening of the Arts of Africa, Oceania, and the Americas, and the expansion of the American Wing). Guided tours may still be a drag, if an informative one, but now we’ve got Claudia and Jamie as veritable tour guides, with an issue of Museum Kids devoted to the novel and custom tours running a few times this month to celebrate its 50th birthday.

Like Claudia, who aims to come home transformed—she wants, in her words, “to go back different”—as readers we hope to leave a text transformed. Happily, The Mixed-Up Files is still a witty delight, and its quixotic, adventurous characters remain as touching as ever. 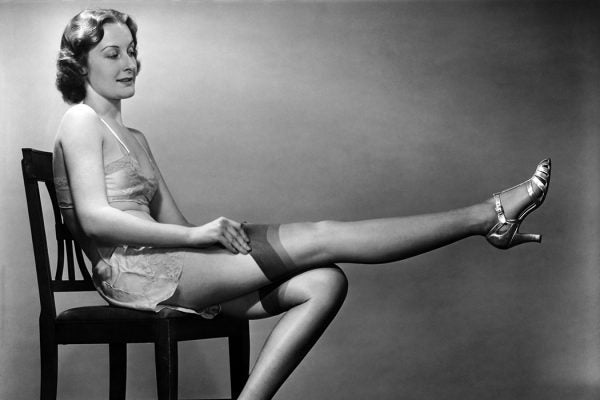 Why Women Burned Their Stockings in the 1930s

The average 1930s American woman bought up to 15 pairs of silk stockings a year—until, that is, women boycotted the fabric behind an essential garment.