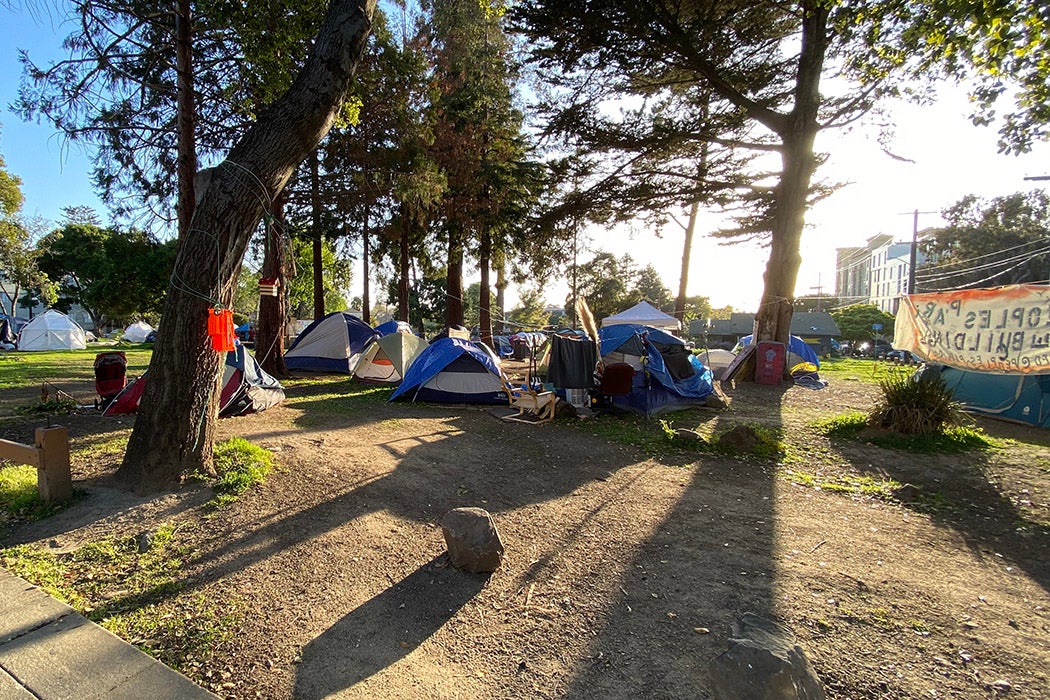 For seventeen months in 2015 and 2016, unhoused residents in Berkeley, California, created their own encampment community at a post office called Liberty City. It’s just one example of unhoused people creating intentional communities.

As David Bacon described in the Race, Poverty & the Environment journal, the Berkeley Police Department, in conjunction with the USPS, dismantled Liberty City in 2016. Meanwhile, the land where People’s Park, another encampment of unhoused people in Berkeley, is located will be turned into housing for the University of California, Berkeley. Many unhoused residents of People’s Park have agreed to move into a nearby inn.

The vilification of unhoused people in Berkeley by other locals and politicians has led to some feeling demonized.

“Many homeless people are also veterans and have to reconcile the irony of having fought for their country with finding themselves social outcasts in the nation they had defended,” Bacon writes.

These tent encampments in Berkeley are in themselves little communities based upon “mutual aid and voluntary cooperation.”

Some of Berkeley’s unhoused residents have spoken positively about intentional communities they’ve built in the city; they want to live in intentional encampments.

These tent encampments are in themselves little communities based upon “mutual aid and voluntary cooperation,” as Michael Lee, activist and former Liberty City resident, said in an interview cited in Bacon’s work.

“Here, there’s more acceptance of this subculture of homeless people,” Andre Cameron, another former Liberty City resident, told Bacon. “I think it’s a tribute in some small cultural way to the community as a whole. I’ve never gotten that sense anywhere else.”

As Bacon notes, where these camps should be built is a contentious issue in the city.

Forcing the removal of unhoused people from People’s Park specifically also runs in contradiction to the area’s history of defying the university. In 1979, the University of California tried to turn the area into a parking lot.

“Protesters tore up the asphalt, pitched tents, and maintained a twenty-four-hour vigil,” according to late American history professor Jon David Cash. “The university surrendered, and park defenders transformed the section into an organic gardening area that thrives today.”

Recently, some Berkeley students who are part of Defend People’s Park have tried to stop the university from turning the area into student housing. People’s Park was also recently listed on the National Register of Historic Places.

When deciding what’s best for unhoused people in Berkeley, politicians also need to talk to the homeless population about what is best for them, instead of making assumptions.

“They should have a park, some sort of a space where people can set up tents and live peacefully, with port-a-potties and showers and trash pickup, and that’s organized,” Cameron told Bacon.