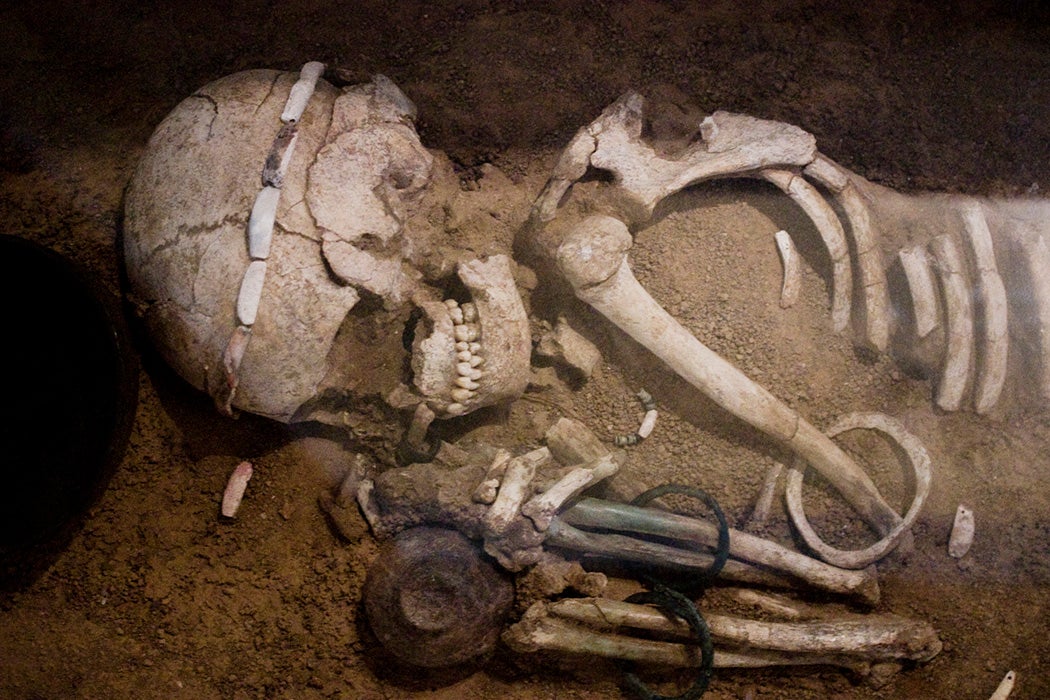 Contemporary archaeologists tend to lump ancient people into simple categories—men and women—based on what their skeletons reveal about their biological sex.

But as feminist scholars have argued for decades, gender is socially constructed, formed through the enactment of specific roles, and need not correspond to one’s sex. Archaeologists who assume gender identities based on the skeletal sex of their ancient subjects risk missing a huge part of the picture—and falling into the so-called binary trap, archaeologist Susan Stratton writes.

Stratton uses the case of the Durankulak cemetery as an example of how an imposed gender binary severely limits archaeological study. Since the discovery of the Durankulak cemetery along the Bulgarian Black Sea coast in 1974, archaeologists have attempted to learn about the social categories indicated by burial patterns. Starting around 5,000 BCE, Late Neolithic and Copper Age people began to bury their dead with grave goods, such as jewelry, polishing stones, axes, antlers, copper, and more.

“A male/female based typology fails to include those individuals who cannot be sexed, or biologically do not fit into one of those two groups.”

Initial studies grouped these burials into male and female categories and found that males were more likely to be buried in a supine style with axes, while females were typically buried in a crouched position with a variety of jewelry, including finger rings. But the 25 percent of burials that could not be confidently sexed—because the bones had degraded beyond recognition, or their physical attributes indicate either sex—were excluded from this research, Stratton notes.

This analysis limited researchers’ understanding of Durankulak’s ancient residents in a number of ways. “Firstly, a male/female based typology fails to include those individuals who cannot be sexed, or biologically do not fit into one of those two groups,” such as intersex individuals, Stratton argues.

“Secondly, by using male/female categories as the starting point for gender analysis, a binary is virtually being pre-determined. The possibility of exceptions from the norm is ignored,” she continues.

Instead, Stratton proposes the use of multivariate statistical techniques that allow researchers to uncover the horizontal and vertical social categories and roles made evident in individuals’ graves. This process also allows for the inclusion of people with fluid gender identities, intersex individuals, and other people whose gender or sex attributes fall outside the binary.

Applying these methods to data from Durankulak, Stratton finds a large area of overlap between typically “male” and “female” burial goods, suggesting that gender categories were not nearly as narrow as archaeologists had assumed. (Women could bear axes, and men could wear rings, for instance.) Likewise, an individual’s sex did not determine the position they were buried in.

In sum, “[i]n the case of Durankulak, while there are gender differences, there was a great deal more complexity than a simple male/female division,” Stratton writes. By allowing for complexity in the gender and sex categories of these societies, researchers open themselves to a richer portrait of ancient lives. Just as they do today, community, social role and status, age, family, and gender all impacted the lives of prehistoric individuals simultaneously.

What’s more, large-scale data sets that assume a gender binary will necessarily impose an anachronistic—not to mention contemporary, and Western—binary framework onto the burial practices of these prehistoric people. In other words, as Stratton warns in her title: “Seek and you shall find.”

"Seek and you Shall Find." How the Analysis of Gendered Patterns in Archaeology can Create False Binaries: a Case Study from Durankulak
By: Susan Stratton
Journal of Archaeological Method and Theory, Vol. 23, No. 3, "Binary Binds": Deconstructing Sex and Gender Dichotomies in Archaeological Practice (September 2016), pp. 854-869
Springer