Devadāsīs appealed to a longstanding tradition to argue that they had a legitimate position in their modernizing nation. 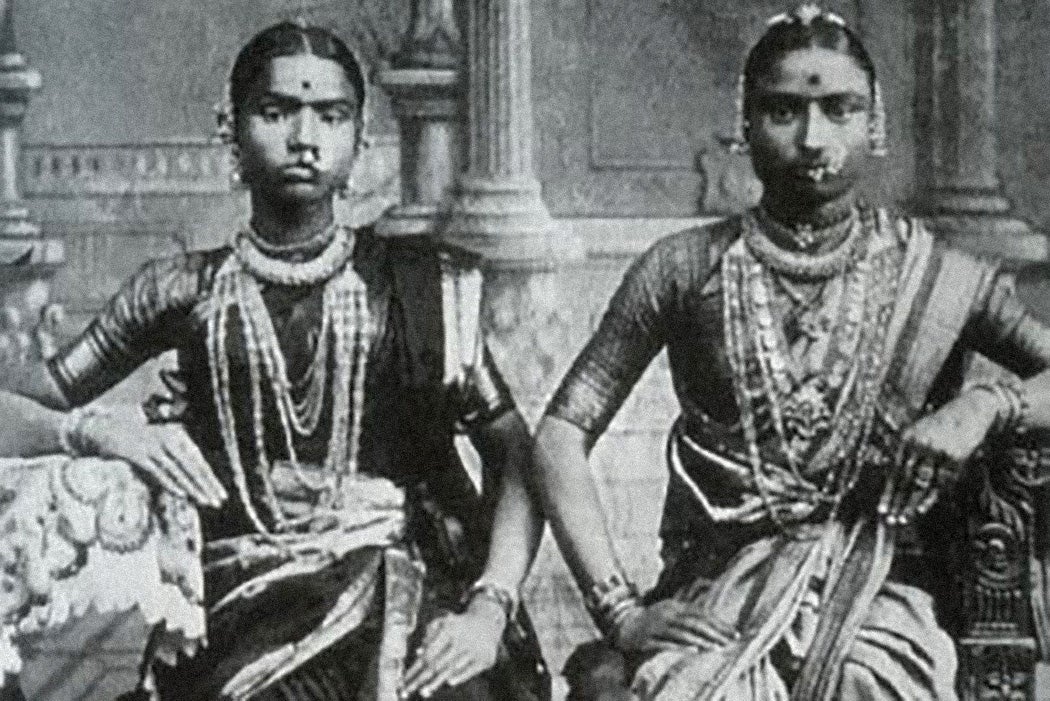 In the late nineteenth and early twentieth centuries, the role of devadāsī, sometimes known as temple dancers, was a subject of hot debate in South Asia. Looking at the dancers’ own writing, social historian Davesh Soneji writes that devadāsīs used appeals to a longstanding tradition to argue that they had a legitimate position in their modernizing nation.

In the mid-nineteenth century, British and American Protestant missionaries criticized Tamil religion as superstitious and idolotric. In response, Soneji writes, a reform movement headed by Tamil writer Ãrumuka Nãvalar sought to revive a “golden age” of religious practice. In the past, Nãvalar argued, devadāsīs were “like ascetics in their devotion to [the god] Śiva, abstaining from prostitution and the consumption of meat and alcohol.” In contrast, he saw temple culture in his own time as degenerate and accused temple authorities of improper sexual relationships with devadāsīs.

Other nineteenth- and early twentieth-century reformers in India and Ceylon sought to eliminate devadāsīs entirely, in what became known as the anti-nautch movement. Begun by the British, it gained support among many Indians. Supporters of this effort wrote poems and stories depicting the devadāsīs corrupting young men and spreading sexually transmitted diseases.

Soneji begins the story of the women’s response with a Tamil book written in 1911 by a devadāsī named Añcukam, in what was then the British colony of Ceylon (now Sri Lanka). Añcukam focused on stories of her predecessors, delved into Hindu philosophy, and ended with her own autobiography. Addressed to fellow devadāsīs, the book documents the lives of “noble women who attained great fame by mastering the three branches of the Tamil language—literature, music and theater,” as Soneji writes. Añcukam described beginning her own training as a child, studying Tamil and North Indian performing arts, Tamil literature, and the Śaiva Hindu tradition, dedicated to the worship of the god Shiva.

Yet Soneji notes that Añcukam performed courtly, not ritual, dances, which aimed to amuse elites. Añcukam also walked a line in her descriptions of the sexual lives of devadāsīs. She writes frankly about relationships between devadāsīs and elite men, including her own twenty-five-year relationship with a wealthy merchant. Yet she also expresses respect for the reformer Nãvalar and urges devadāsīs to remain chaste.

When legislators in India proposed the abolition of devadāsīs in 1928, many of the dancers responded with arguments similar to Añcukam’s. Where their opponents defined their role as prostitution, they described it as a longstanding tradition of religious devotion. A memorandum from the Madras Devadasi Association—a group that included prominent performers—invoked Tamil religious and literary heritage and compared devadāsīs to Buddhist or Catholic nuns. It also called for reform, to return their Tamil tradition to its grand past.

“Give us education, religious, literary, and artistic,” the group wrote. “Education will dispel ignorance and we will occupy once again the same rank which we held in the national life of the past.”

Añcukam and her fellow devadāsī writers were ultimately mostly unsuccessful. Upon Indian independence in 1947, their profession was criminalized. That didn’t eliminate devadāsīs, but even today they remain highly stigmatized.