We look at the current global coral bleaching event, possibly the worst in recorded history. 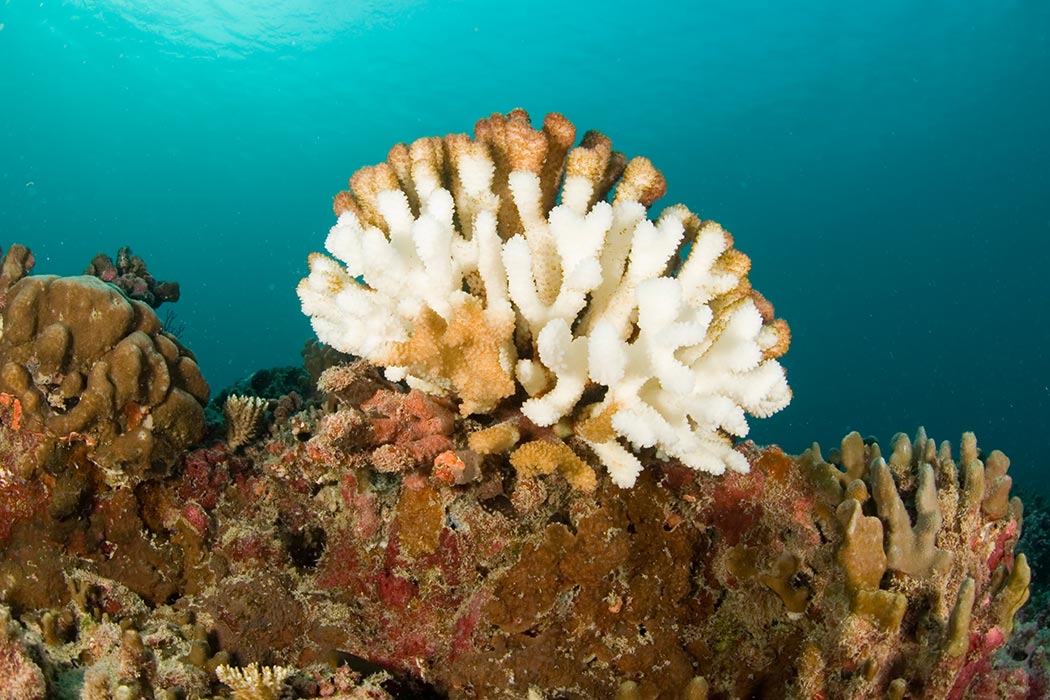 Scientists are watching helplessly as a massive, global coral bleaching event unfolds. The bleaching is a result of excessive warm water brought on by a mixture of climate change and a strong El Niño cycle. The bleaching is particularly severe in Hawaii and other tropical U.S. areas, and scientists fear that if it continues for additional seasons, the coral loss might be even more severe than previous global bleaching events in 1998 and 2000. What is coral bleaching? Can anything be done about it?

The key is that there is more to coral than just the coral animal itself. Coral reefs are made up of thousands of individual coral polyps, which secrete the limestone framework of the reef as they grow. At the same time, each polyp lives in a symbiotic relationship with microscopic algae called xooxanthellae, and it is these that are primarily affected during the bleaching.

The xooxanthellae give coral its beautiful colors, but if temperatures rise too much, the tiny algae colors revert, leaving the coral white and colorless—in other words, bleached. Unfortunately, the coral cannot survive for long without their algae partners. Xooxanthellae are photosynthetic and take the products of the coral polyps’ respiration, carbon dioxide, and water, and use it, along with sunlight, to produce sugars and carbohydrates, which the coral polyps use for sustenance. As observed during the 1998 bleaching, without the xooxanthellae, bleached coral do not grow, reproduce, or grow their reef. Bleached corals may also be more vulnerable to disease.

If the bleaching doesn’t persist, the xooxanthellae will regrow and the coral can recover. If the bleaching continues, the coral polyps will starve, and their bare skeletons will be quickly overgrown with algae. Worse, the dead reef is not growing and does not compensate for losses from predation or erosion, leading to the destruction of the entire habitat. During the 1998 event, Indian Ocean reefs were particularly hard hit; large areas suffered complete coral destruction.

Can anything be done? Whether or not climate change can be stopped is unclear, but there might be some short term hope. There is some evidence that some xooxanthellae can adapt to rising temperatures, although it is not clear if they can do so fast enough. The good news—or the bad news, depending how you look at it—is that coral bleaching is not the only threat to reefs. Bleaching impacts corals the most when combined with other factors, such as nutrient pollution and runoff that further stresses the coral. If general water quality improves, the coral as a whole is healthier and better able to withstand the stress of bleaching. Water quality problems can be addressed at the local level and should be inherently easier to solve than global climate change. It’s a small glimmer of hope, but we’ll take it.