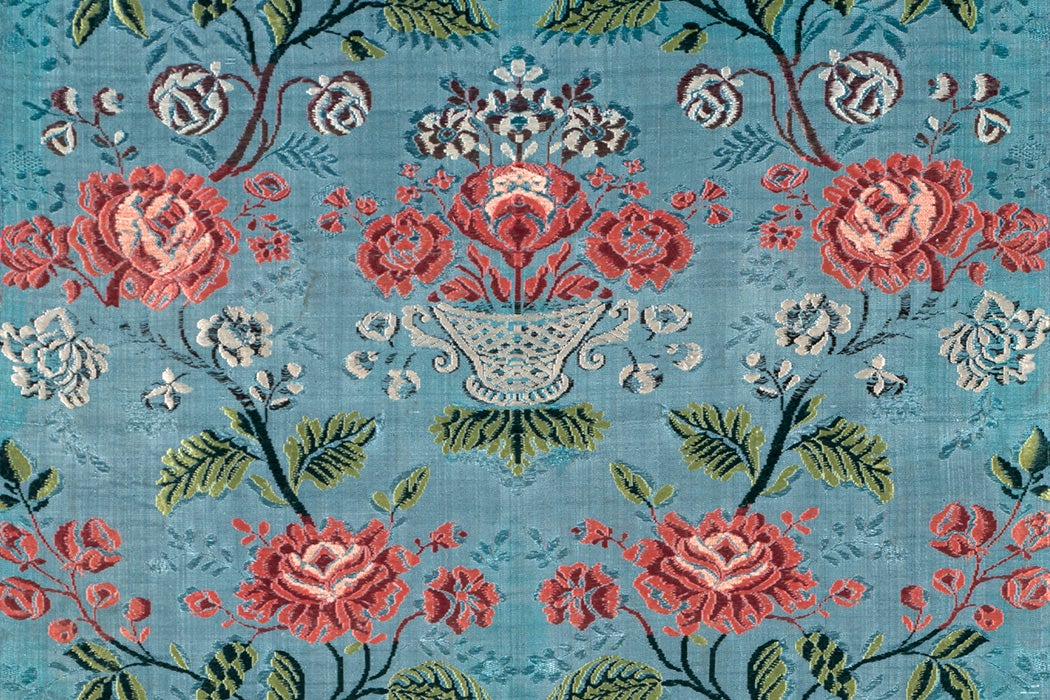 After being introduced from China, silk cloth became a hallmark of European luxury. By the middle of the eighteenth century, French silk—used for wallpaper, upholstery, and, of course, clothing—dominated the European market. But, as scholar Paola Bertucci shows, the French were dependent on importing double-twisted Italian threads. This organzine, as the Italian thread was known, was superior to the thread made in France itself.

So what was the secret of Italian silk thread, and how could France learn to produce it at home? According to Bertucci, they resorted to industrial espionage, what she calls “intelligent travel.”

In the course of the eighteenth century, the gathering of information through travel became a common means of rationalizing the exploitation of resources, with intelligent travelers becoming increasingly crucial for the political economy of the state.

This form of industrial espionage wasn’t exactly cloak and dagger. It was common at the time for savants, men, mostly but not exclusively, of science to travel abroad and gather trade secrets. They insisted they weren’t spies but rather just curious about the advancing wonders of the age.

Jean-Antoine Nollet, “with a background in the mechanical arts,” was commissioned by France’s Bureau of Commerce to report on the silk industry in Piedmont, Italy.

In 1749, one such savant named Jean-Antoine Nollet, “with a background in the mechanical arts,” was commissioned by France’s Bureau of Commerce to report on the silk industry in Piedmont, Italy. He did so undercover—sort of—visiting as a celebrated member of the Paris Academy of Sciences.

A popular lecturer, a skilled performer of science spectacles, and the author of numerous works, Nollet was already known to the Piedmontese court because he had been the physics tutor to the kingdom’s crown prince in 1738. His official reason for traveling in Italy was a “philosophical duel.” Italian savants were making great claims for the medical efficacy of electricity. The skeptical Nollet challenged them to perform electrical cures in his presence.

While he was there, he also took a tour of an Italian silk workshop. The crown prince himself escorted his old tutor to one manufactory. There, Nollet was entirely open about his interest in the silk industry. His “learned curiosity” was considered absolutely natural by his hosts.

Meanwhile, those involved in the silk business, accustomed as they were to cheats and frauds, were distrustful of Nollet. Theirs was an entirely different moral economy—the great split between the openness of science and the patents of capitalism was just taking shape.

By insisting on the difference between his innocent curiosity and suspicious world of trade, between the gossiping merchants and the welcoming gentlemen who openly showed him the processes of silk manufacture,…[Nollet] wanted his superiors at the Bureau of Commerce to understand his report as the work of a savant.

But his report was also a state secret. This period of open spying didn’t last much beyond the century. The curious men and women of science, enmeshed in “intelligent networks” across Europe, didn’t fool the businessmen for long.

Enlightened Secrets: Silk, Intelligent Travel, and Industrial Espionage in Eighteenth-Century France
By: PAOLA BERTUCCI
Technology and Culture, Vol. 54, No. 4 (October 2013), pp. 820-852
The Johns Hopkins University Press and the Society for the History of Technology