Maybe it’s something about the number eleven? 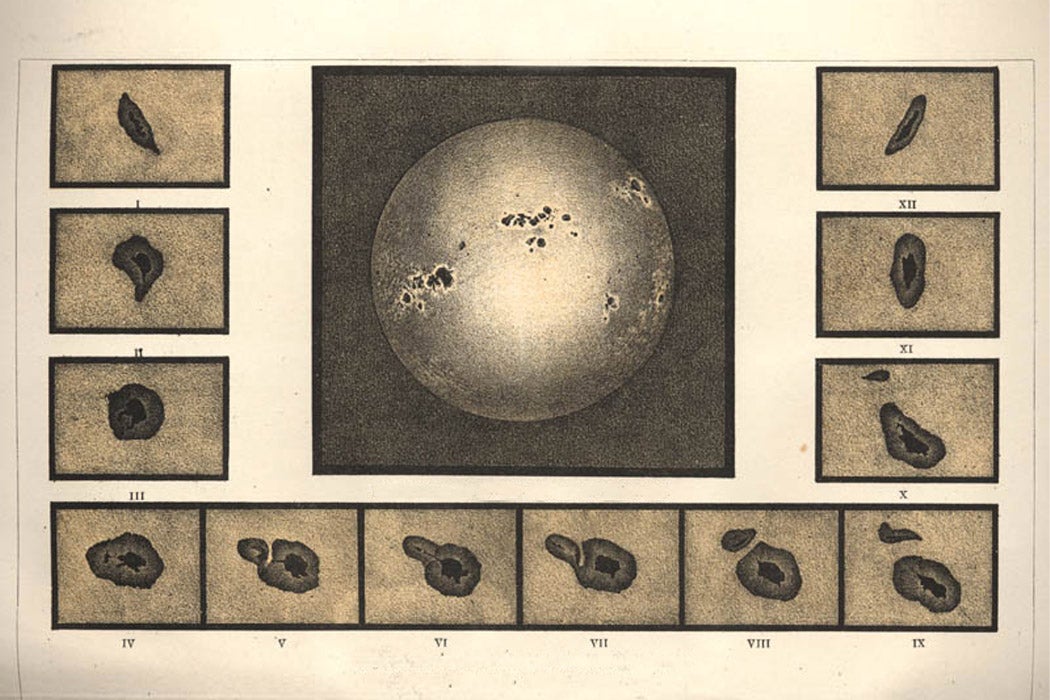 An illustration of sunspots from between 1885 and 1890
via Wikimedia Commons
By: Alex Langstaff
5 minutes
Share Tweet Email Print

William Henry Jevons was one of the forgotten fathers of modern economics and, in a way, of astronomy. A brilliant statistician and philosopher, Jevons, who lived in Victorian England, pioneered early theories of resource depletion and macroeconomics. In the late 1870s, Jevons amassed a wealth of data suggesting a connection between a decline in sunspots, of all things, and an increase in crop failures, leading to a market downturn. Jevons traced this correlation back to the infamous South Sea Bubble of 1720, the first major financial crash of a modern stock market.

Today, NASA predicts we are entering a “solar minimum,” a period when sunspots—activity on the sun’s surface, often visible through a telescope—decrease significantly. The sun can be likened to an enormous nuclear reactor, producing tens of thousands of atomic bombs of energy per second in solar flares. Sunspots move in 11-year cycles. It is this cyclical dynamic that has led a surprising number of influential thinkers to connect them to patterns in our economy and environment.

Many ordinary people delighted in this research, leading some contemporary observers to contemptuously scoff at the fad of “sunspottery.”

In the 1880s, sunspots’ effects on Earth were one of the leading areas of research in astronomy and in the emerging field of climate studies. Science magazine encouraged statisticians across scientific fields to compare sunspot data with temperature, pressure, magnetic disturbances, and rainfall—as well as financial crises and epidemic diseases. Many ordinary people delighted in this research, leading some contemporary observers to contemptuously scoff at the fad of “sunspottery.”

The astronomer George Ellery Hale, of the California Institute of Technology, was fascinated by sunspots. In 1908, Hale discovered that sunspot activity created magnetic disturbances that could alter Earth’s electromagnetic field. Hale’s research launched the study of space weather, which continues to draw together astrophysicists and Earth scientists in a shared conversation. In the 1920s, he designed a special telescope, a spectrohelioscope, that could observe activity on the sun’s surface with unprecedented detail.

The types of questions Jevons raised about the economic knock-on effects of solar activity continued to consume great economic minds, like A. C. Pigou and William Beveridge, well into the twentieth century. The Harvard sociologist Pitirim Sorokin considered the links between sunspots and the origins of wars. John Maynard Keynes, on the other hand, labelled the infectious debate over Jevons’ idea the “sunspot virus.”

Some macroeconomists now use sunspots as metaphors to refer to any external shock that affects expectations and accounts for changes in business cycles. But if sunspots have become symbolic of uncertainty for some social scientists, scholars in other fields continue to explore their actual effects on our daily lives.

The historian Geoffrey Parker’s award-winning book Global Crisis: War, Climate Change and Catastrophe in the Seventeenth Century became a bestseller during the coronavirus pandemic for its account of how disease and political-economic meltdown swept the early modern world. In the book, Parker uses data on crops and sunspot cycles—first systematically observed in the seventeenth century by Louis XIV’s royal astronomer—to argue that this environmental imbalance was partly driven by disturbances in solar weather, which helped catalyzed what we now call the Little Ice Age (1300-1870). Parker’s inspiration for his novel thesis was a Science paper by the U.S. government astronomer John Eddy from 1976. Working at the National Center for Atmospheric Research, in Boulder, Colorado, Eddy became interested in applying the surprisingly deep record of sunspot data to anticipate future solar surges.

In September 1859, the aurora borealis was reported as far south as Hawaii and Cuba. At the same time, a British hobby astronomer noticed an immense cluster of sunspots. In the following days, the world’s nascent telegraph networks were completely immobilized. What became known as the Carrington Event was, in fact, a massive solar storm. Robert Giegengack, a scientist at the University of Pennsylvania, considers what a similar event would look like today. As ionized gases and energetic particles suddenly ejected from the sun bathe the Earth, hitting wires, transformers, and switching equipment that may be scrambled as a result. The “wholesale failure of networks that provide energy, water, and food” might follow. This doomsday scenario seems like the stuff of science fiction, but governments are taking notice.

In 2011, the UK added “extreme space weather events” to its National Risk Assessment, alongside terrorism, global warming, and pandemics. Based on findings suggesting that solar superstorms could destroy critical satellite and electrical grid infrastructure, and disturb GPS, high-frequency communications, and terrestrial broadcasting, the Royal Academy of Engineering lobbied in 2013 for the creation of a Space Weather Board to monitor and forecast solar activity. In 2015, the U.S. National Security Council’s interagency SWORM Task Force (Space Weather Operations, Research and Mitigation) released a National Space Weather Strategy. In October 2016, President Obama signed Executive Order 13744, which ties solar forecasting to the nation’s security.

Research continues to build better models of sunspot activity, and to understand its effects on seemingly unrelated aspects of our environment and economy. Traditionally terrestrial topics, like fluctuations in seasonal rainfall, have been correlated to the rhythm of sunspot cycles. Judith Lean of the Naval Research Laboratory’s Sun-Earth System Research anticipates increasing public attention on how solar activity affects our everyday lives. Ultimately, with the vulnerability of critical infrastructure powering the world’s economies, Lean expects that space weather forecasting “will ultimately blend seamlessly with that of meteorological weather.”

Share Tweet Email Print
Have a correction or comment about this article?
Please contact us.
economic historysunAmerican Sociological ReviewEnergy & EnvironmentHistory of Economic IdeasOxford Economic PapersProceedings of the American Philosophical SocietyScienceThe Quarterly Journal of EconomicsTransactions of the Royal Historical Society 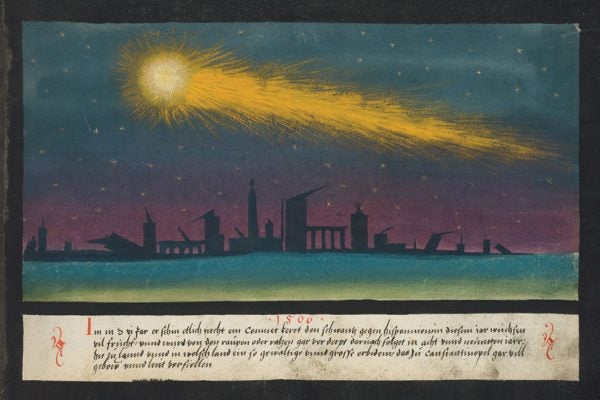 Even the invention of the telescope couldn't convince all people to put aside superstitions about comets.