The designer’s impulse to convey his two selves to the public stemmed from a desire to be seen as genuine artist working in a world of artifice. 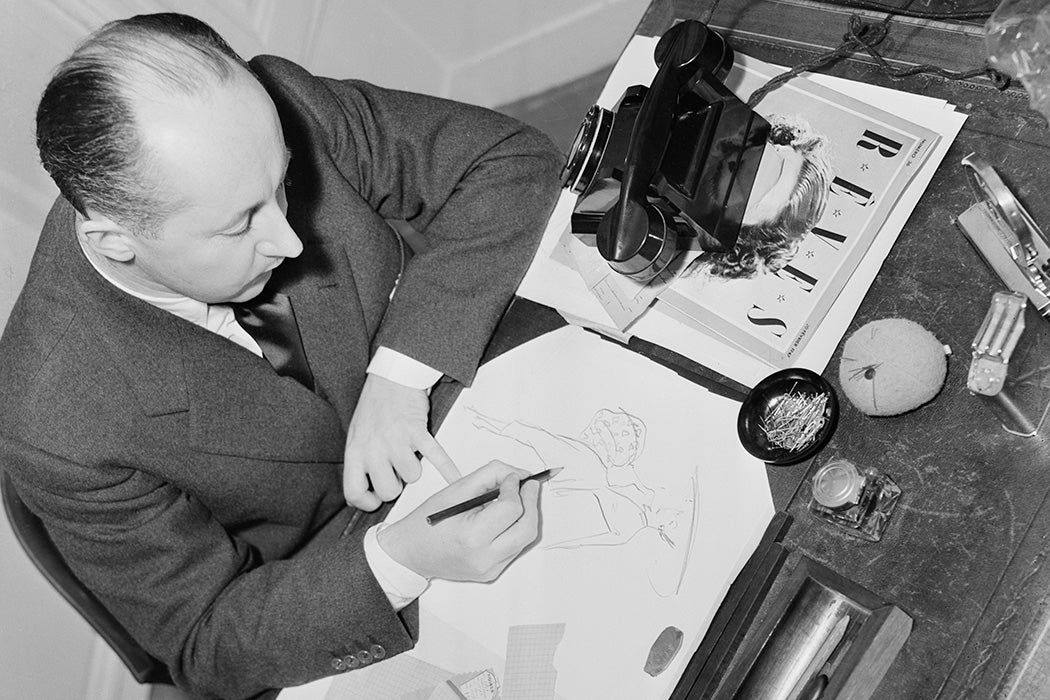 Christian Dior’s debut “New Look” collection catapulted him to fashion stardom in 1947. He died just ten years later, but not before publishing his memoir, known in English as Dior by Dior but more revealingly in French as Christian Dior et moi [Christian Dior and me]. Through the construct of “two Christian Diors,” the iconic designer conveyed the tension between “public celebrity and intimate personhood,” a situation perhaps unique to the life of artist in a field with a curious relationship to time.

Scholars Ilya Parkins and Lara Haworth suggest Dior’s impulse to convey two selves stemmed from a desire to “preserve his public image as a genuine artist” in response to suspicion about the world of artifice in which fashion designers worked and played. Dior wanted to “ensure appropriate distance between his private self and public persona.”

“We live in the times we do; and nothing is sillier than to turn one’s back on them.”

His conceptualization of his double selves was built around his profession’s complex relationship with time and place. As a fashion designer who pulled on the past to revitalize the present, Dior, like his couturier peers, was already a “liminal figure” trafficking in “the dissolution of boundaries between past and present, between temporal categories that are meant to remain discrete.”

Born in 1905, midway through the Belle Époque, he spent his early childhood in Granville, Normandy, to which he returned in the summer after his family moved to Paris. Paris was responsible for creating Christian Dior, couturier; the Norman side made him crave privacy. Throughout his memoir, Dior uses the third person to describe the contemporary Parisian designer, the first person to describe the Norman who continued to live somewhat in the past. With his fondness for Louis XVI interiors—which he picked up in Normandy—and his “New Look” evoking pre-World War II opulence, Dior emerges as a “nostalgic subject” but not a reactionary one. In fact, as he writes, “[w]e live in the times we do; and nothing is sillier than to turn one’s back on them.”

Dior’s nostalgia is “an act of imagination tied to a sense of place…” Write Parks and Haworth,

[The] concept of nostalgia’s imaginative dimension allows us to see the reconstructive and indeed creative work involved in bringing together the past and the present. […] By bringing a sense of the places of his Belle Époque childhood into contact with the spaces—both public and private—of his life as a celebrity in the 1950s, which are constituted by the mobility and ephemerality of the fashion industry, Dior engages in an imaginative integration that belies and transforms the stasis ostensibly represented by the past.

Dior implies his “split subjectivity” is responsible for his success, his retreats out of the public eye to Normandy creating the spark of inspiration for his designs.

In showing how the spaces of his childhood influenced the commercial spaces of his adulthood, Dior inadvertently demonstrated the impossibility of separating his private and public spheres. When his memoir was published without much initial fanfare, that lack of distance between public and private was further emphasized with the book being seen as “too closely bound up with the audience’s demands, published to speak to and capitalize on the mass market’s love for Dior.”

Dior’s memoir—his goals for it and its reception—not only demonstrates the tension between the public and the fashion world, which the former accuses of superficiality and falsehood. It also turns a spotlight onto the “neglected terrain of the designer memoir” as distinct from the more conventional autobiographies of other business people working in artistic fields.

The Public Time of Private Space in “Dior by Dior”
By: Ilya Parkins and Lara Haworth
Biography, Vol. 35, No. 4 (Fall 2012), pp. 668–689
University of Hawai'i Press on behalf of Center for Biographical Research