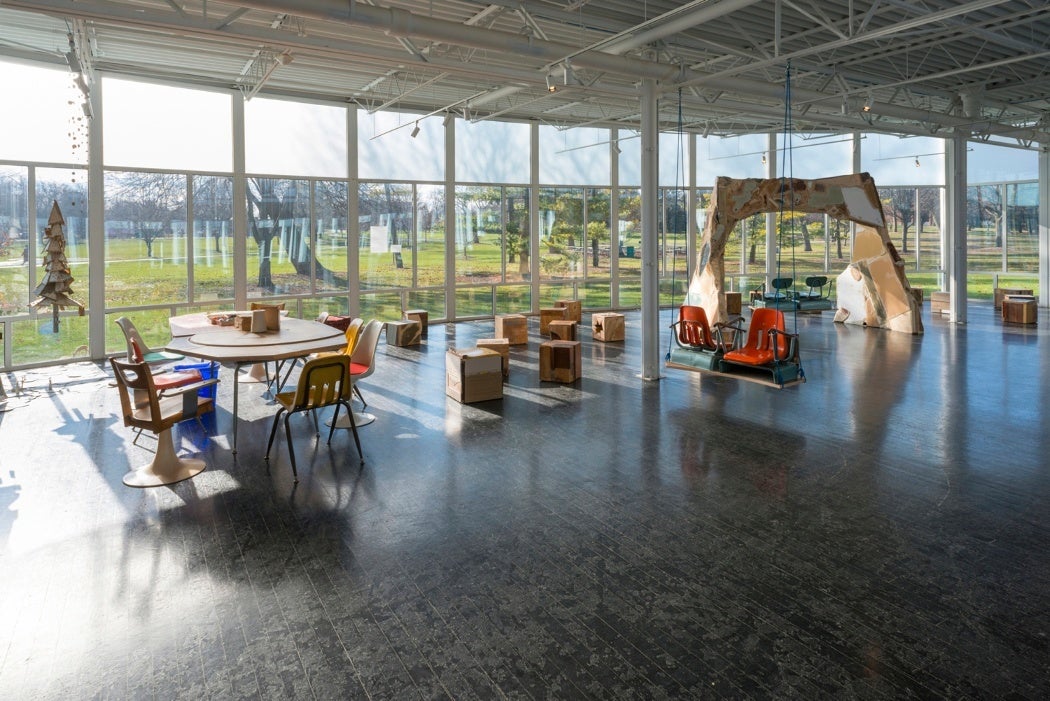 Artist and designer John Preus (pronounced ‘PROYCE’) describes himself as “the son of Norwegian Lutheran pastors going back 6 generations.” He spent his early years “running barefoot under a cathedral of trees in Makumira, Tanzania,” before moving back to the U.S. with his parents to Minnesota, experiences that instilled a sense of adventure as well as a deep understanding of collaboration and service that permeate his approach to art and design.

In addition to his work as an artist (his latest exhibition at Rhona Hoffman is on view through April 16), Preus maintains a professional design studio that uses 2nd hand materials almost exclusively. He also dabbles in creative personas such as amateur writer, fabricator, and musician. As a collaborator, Preus co-founded the art group Material Exchange in 2005, and went on to collaborate with co-founder Sara Black until 2010. Preus also co-founded SHOP with artist and curator, Laura Shaeffer. From 2011 to 2013, Preus served as Creative Director of Rebuild Foundation and was lead fabricator for Theaster Gates’s studio, leaving in 2012 to focus on his own practice. I met Preus at his studio recently to see the artist at work and learn more about how his life as an artist converges with his work as a designer, and to learn more about some of his artistic and theoretical influences.

Lee Ann Norman: So where are you from? Where did you grow up?

John Preus: I’m from Minneapolis, but I grew up in Tanzania. My parents were Lutheran missionaries, so I lived there until I was six.

Did you all move directly to Minnesota after that?

Yeah. I went to high school and college there and moved to Chicago for graduate school. The first art experience that grabbed me was when my parents were in a neighborhood band in Minneapolis. They’d meet at the neighborhood center, and while they were rehearsing, I’d go to ceramics class. I remember the experience of playing with clay and then seeing something come out of the kiln. It seemed like magic. In high school, I got really into ceramics (the art program had a kiln), and I chose a college in part based on the ceramics program.

During my first year [as an art student], I was drawing more than doing ceramics. There was a teacher who taught a class called “Dream Images,” and I started doing a lot of pastel drawings of dreams. It was really fascinating to me as an entry for [studying] the unconscious, which led to [learning about] Jung and Freud. Then I studied for a semester in Italy. My teachers were a female couple from South Africa, known to their students as Rosenclaire (Rose and Claire) who had been there for many years. Their summer program was affiliated with the school, so I ended up going back 3 times, and met and worked a bit with William Kentridge and Jeff Hendrix. It was a real awakening coming from a relatively provincial art program in Minnesota.

Were you studying ceramics in Italy? What was special about the courses for you?

It was very multidisciplinary. Their specialty was painting, so I ended up doing a lot of painting, but was also introduced to a variety of new media, including printing and some sculptural work. But more than that, they opened my eyes to much more interesting ways in which art is related to politics, culture, religion, psychology, history…before that, I was mainly interested in representation. Of course, I couldn’t articulate it at the time, but there’s all this information out there in the world that we take in and filter through our subjective apparatus. I thought learning to draw or paint was just a matter of technique, but they helped bring to my awareness the difficulty of getting that information through the body, into your hand, and out onto a canvas or piece of paper in a way that reflects what went in. Representation, in a way, is the practice of observation, which I think relates much more broadly to politics, how we consume media, and even the way we gain a sense of ourselves. Consciousness, or whatever you want to call the awareness of ourselves, is a strange thing.

I think that’s a really good way to think about it. Everything artists make has much to do with who they are, how they think, how they experience the world—all perception. I think we want to separate those things, though, and only focus on the object or the experience. It’s interesting to think about how the information that informs art comes in and goes out.

Your experience in Italy seems very transformative. Was there a moment there when you felt comfortable not focusing so much on that concept of the “pure” object?

I think I have to answer this indirectly. (laughter) The experience there was kind of antagonistic. They insisted that there’s a lot more to art than learning how to make a peach look like a peach. I was really resistant to that; I kind of liked imagining myself as the “art star” in a small college in Minnesota. They forced me to confront the way I think, make judgments, perceive things…because it’s already there and shows up on the page. The object already reveals all of my prejudices, so I have to treat it with some degree of autonomy, as a sort of alien intelligence.

More recently, you’ve been making work, using furniture from closed Chicago Public Schools. Can you share more about how you got the furniture and your interest in wanting to acquire it?

I had a relationship with the Resource Center, and when someone would offer a furniture donation, they automatically routed the call to me because they were at capacity. About 5 years ago I got a call from the CPS facilities manager that they would be tearing down Crispus Attucks on 38th and State. The school was closed and had become a warehouse for all kinds of district stuff. I was working with another artist at the time, and most of the material went to his studio, but I kept a few things myself; that was the first time I started to think about how to use this material. A few years ago when the big wave of school closings happened, I got another call and made arrangements with the moving company to route as much of the stuff that was being thrown out as possible, to my shop, which ended up being about 6 semi-truck loads.

Your exhibit at the Hyde Park Art Center was the first time you made work using that material?

No, I made a few small objects out of it before that, a swing set. … I don’t feel like I have a specific politic around using that material other than to say we are at a moment of crisis with public institutions generally, and with developing a progressive vision of what that means. The material embodies that crisis for me, and can be framed in varyious ways—related to race, education, economic structures, public space . . . Depending on the project I’m working on, I change the frame.

I don’t necessarily think of this as animism—but I am interested in how the material world has a reflective quality. I think we’re emerging from an understanding of the material world as dead matter. Material holds history and memory and the language for talking about that has developed a lot over the last 10 years or so. A woman who is a CPS teacher went to my MCA show. She was really interested in the furniture, asking a lot of questions, when suddenly it just clicked for her, [that the objects were made from discarded CPS school furniture] and she sat down and wept. There’s something there, and I don’t always know how the associative power of the materials will trigger certain experience … nothing to do with me, and can legitimately be seen as a kind of exploitation.

There are so many structural conditions that are endlessly self-defeating but determine how cities like this function. How does one try to find a foothold when real estate prices are inaccessible, space is inaccessible, and oversight from zoning or code regulations make life here so difficult for so many? And what sort of educational or developmental experiences are necessary to emerge from what feels almost intractable? Certain guerrilla tactics are always necessary to shake things up enough for movement to be possible. These aren’t novel ideas. At this point, maybe we just have to settle for temporary autonomous zones. We need space to think and be social without needing to feel defensive. Five guineas and a room of one’s own. 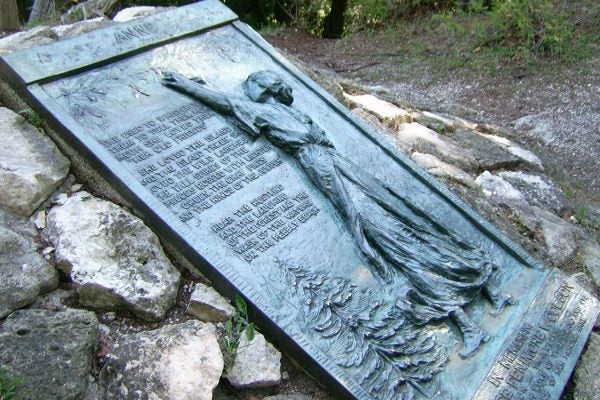 Constance Fenimore Woolson was a renown American Realist writer in her day, but has since almost disappeared. Two new books attempt to change that.