Angela Proctor on the “Opinions Regarding Slavery: Slave Narratives” Collection

We spoke with Angela Proctor, head archivist at Southern University, about the collections of slave narratives compiled by John B. Cade from 1929-1935. 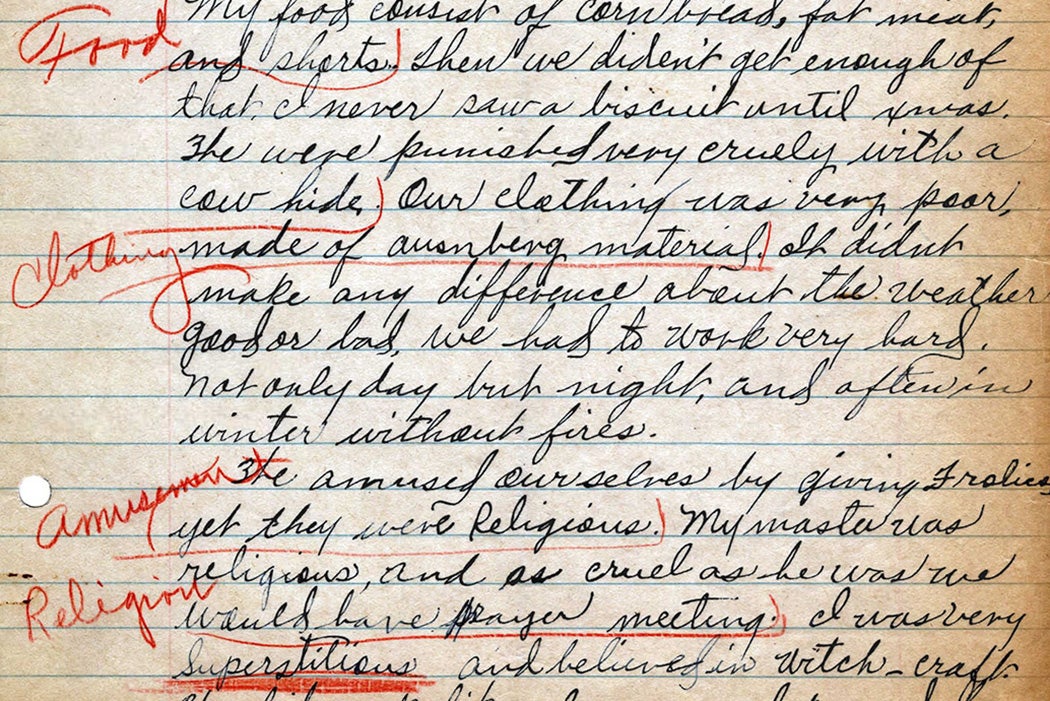 From an interview with Eliza Hixon. The red marks are the teachers' notes.
via JSTOR
By: Catherine Halley
4 minutes
Share Tweet Email Print

Angela Proctor is the head archivist at Southern University in Baton Rouge, Louisiana, which houses the papers of historian and former dean, John Brother Cade, as well as a collection of slave narratives titled “Opinions Regarding Slavery: Slave Narratives” that Dean Cade compiled with his students in 1935. The documents are unique in so far as they predate the well known Works Progress Administration (WPA) slave narratives by 5-10 years. I spoke with Angela Proctor about the archives at Southern University, some of which are now available on JSTOR. The following is a transcript of our conversation.

Hello, my name is Catherine Halley. I’m the editor of JSTOR Daily. I’m here today with Angela Proctor, who is the Head University Archivist at Southern University in Baton Rouge, Louisiana. Before we get into talking about the specific slave narratives that are at Southern University, why don’t you go ahead and start by talk to us about John B. Cade. Who was he and what was his connection to the school? (You may listen to the interview with Angela Proctor below.)

How did John B. Cade become interested in collecting the narratives of formally enslaved people?

Before I go any further, I want to inform the public that Southern University is fortunate to have had three different sets of slave narratives. For the purpose of this interview, I will refer to each collection by the year. The first study of slave narratives was conducted at Southern University in 1929 by Dean Cade. The second set of slave narratives is dated 1935; it is titled “Opinions Regarding Slavery.” And the last set in 1940, the Louisiana Works Progress Administration. The 1929 set of narratives were compiled and conducted to dispel the remarks reportedly made by Dr. U.B. Phillips, who had said, “Negros for the most part did not mind slavery.” The 1929 set of narratives was destroyed by fire.

Who worked with Dean Cade to compile the narratives? Did he work with his own students or other teachers students at Southern University?

Referring to the 1929 set, during Cade’s tenure as the Director of Extension Services, he would leave campus every Saturday during the school year to visit such areas as St. Joseph, Monroe, Bastrop, and Minden. While teaching the topic of slavery in a class in United States History, he conceived the idea of securing views of the institution from living ex-slaves and ex-slave owners. All students, most of whom were teachers themselves, were requested to interview as many other persons as possible. The 1935 interviews were conducted by students attending Prairie View A & M University as well.

How does the material differ from what John B. Cade published in 1935 in the Journal of Negro History?

The materials differ from one collection to another. Starting with the 1929 set, the students were given a set of questions or conditions to ask each ex-slave. They were centered around social aspects, such as food, clothing, housing facilities, working conditions, et cetera. Based on the information we have from the archives department, and as the archivist, I would surmise that the 1929 set of narratives may perhaps be the same ones, which are referenced in the Journal of Negro History. But since they were destroyed; we don’t have any documentation other than Dean Cade’s personal papers. There were 36 reported interviews, totaling 82 to this collection.

With the 1935 set of narratives, Dean Cade wanted to get a picture of conditions during slavery and the Civil War times. And to get a picture from Negroes themselves. Some of the same set of questions were asked. The narratives from this set of interviews from ex-slaves centered around 17 states. They are Alabama, Arkansas, Florida, Georgia, Indian Territory, Kansas, Kentucky, Louisiana, Maryland, Mississippi, Missouri, North Carolina, Oklahoma Territory, South Carolina, Tennessee, Texas, and Virginia. There were a total of 229 interviews from this collection.

The 1940 set is totally different. These narratives were not compiled by Dean Cade nor Southern University. The educational background seems to be lacking among the ex-slaves with this set, as opposed to the first two. The vernacular among the ex-slaves is very robust. If you are a person from the South, you more than likely would know or understand the context, but if you aren’t, it may be problematic for someone.

The students were asked to seek some of the same exact questions regarding social aspects. The narrative from this set of interviews, contained four cities within the state of Louisiana: Alexandria, Gretna, McDonoghville, and New Orleans.

Are there any other material in the archives at Southern University to complement the materials that are available on JSTOR?

Yes. And that would be the Louisiana Works Progress Administration or the 1940 set of slave narratives. These are a 50 first person account of originals and some reproductions of ex-slaves into abuse. And again, these narratives were not compiled by Dean Cade or Southern University.

Out of the Mouths of Ex-Slaves
By: John B. Cade
The Journal of Negro History, Vol. 20, No. 3 (Jul., 1935), pp. 294-337
The University of Chicago Press on behalf of the Association for the Study of African American Life and History