Extinct in the wild, the Franklinia tree is still cultivated in botanical gardens, private homes, parks, even cemeteries. It’s also got an interesting Revolutionary-era backstory. 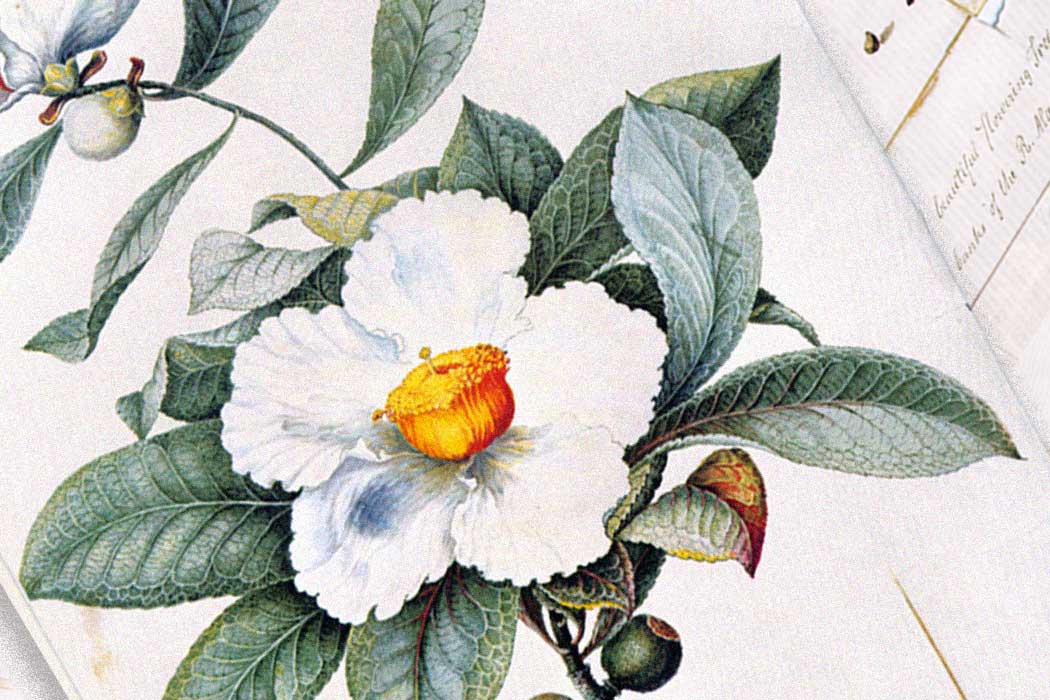 Along the Altamaha River near Georgia’s Fort Barrington, the Franklinia alatamaha was witnessed for the first and last times. The tree was initially recorded by botanists John and William Bartram, a father-son team from Philadelphia, in October 1765. The Bartrams were out exploring because earlier that year, King George III appointed John his Royal Botanist for North America. William would return several times, collecting the tree’s seeds in the 1770s and bringing them back to Philadelphia. It wasn’t until 1781, years after his father’s death, that a cultivated tree finally bloomed its snowy camellia-like flowers. William decided to name the tree in honor of one of his late father’s friend, a fellow botany aficionado who through John had introduced rhubarb to North America: Benjamin Franklin.

An elegant watercolor of Franklinia, attributed to William Bartram, is now at the Natural History Museum in London. One white flower faces the viewer, its five petals surrounded by a burst of deep green leaves. In the fall, those leaves turn a radiant red, sometimes while the flowers with their orange-like fragrance are still in bloom. That contrast and its dainty form—growing to about 25 feet tall—made this member of the tea tree family ready for popular gardening, and, as botanist Peter Del Tredici wrote in Arnoldia, nurseries in Philadelphia started cultivating Franklinia in the nineteenth century. One early propagator was Thomas Meehan, a British immigrant who had worked at Bartram’s Garden, and would later partner with Charles Sprague Sargent, the first director of Harvard University’s Arnold Arboretum, to protect Bartram’s house and garden as part of the Philadelphia park system. He also donated a Franklinia to the Arboretum, which now has the two largest specimens in the world.

Franklinia only exists in cultivated places like arboretums; in the wild, it is extinct.

Franklinia only exists in cultivated places like the Arboretum; in the wild, it is extinct. In William Bartram’s 1791 Travels, he wrote: “We never saw it grow in any other place, nor have I ever since seen it growing wild, in all my travels, from Pennsylvania to Point Coupe, on the banks of the Mississippi, which must be allowed a very singular and unaccountable circumstance; at this place there are two or three acres of ground where it grows plentifully.” The last person to observe it in the wild, as researcher Keith Stewart Thomson related in American Scientist, was collector John Lyon in 1803. At the Fort Barrington site, where once there were acres, six or eight individuals remained.

So where did this lost tree come from? Was it a remnant of some primeval forest? Were its seeds dropped by migratory birds? Maybe it isn’t a native tree at all? Botanist Gayther L. Plummer explains in the Proceedings of the American Philosophical Society that there are many clues pointing to this theory, such as it growing better in cooler climates than Georgia’s, and its lack of distribution. It may have been imported by the French in the seventeenth century, or transported on a West African slave ship. With no other Franklinias identified anywhere on Earth, the mystery remains.

In 1998, to mark the 300th anniversary of John Bartram’s birth, Bartram’s Garden conducted a census to locate as many Franklinias as possible. Hundreds were submitted, thriving at botanical gardens, private homes, parks, even cemeteries. Each can be traced back to the seeds collected centuries ago by William Bartram, who simultaneously described and saved this enigmatic tree.

Frederick Hollick's case involved not only his controversial sex-positive arguments, but also the question of who should be privy to medical knowledge about sex.