The hacking of Ashley Madison, the site devoted to helping married people have affairs, suggests just how difficult sneaking around is in the age of the Internet.

We often picture people taking their marriage vows more seriously in earlier eras in American history. But, in a 2004 paper for the Journal of Social History, Beverly Schwartzberg explores how much easier it was for people in the late 1800s to privately act in ways that, today, would be exposed immediately.

In an era where people didn’t leave much of a paper trail, it was not that uncommon for husbands and wives to quietly walk away from a marriage, present themselves as single or widowed, and sometimes marry again. Some even took on entirely new identities.

Schwartzberg found details of people’s marriages in Civil War pension records. The Pension Bureau tasked with determining whether claims were legitimate ended up addressing lots of messy cases. Cases in which more than one woman claimed to be the widow of a veteran were common enough that the staff used a standard abbreviation for them—”cont. wid.” for “contesting widows.”

Within one set of about a million cases in which someone eventually successfully won a pension, about one in 102 files involved two or more supposed widows. In another, smaller set of 150,000 to 250,000 rejected cases, up to 1 in 30 cases were marked “cont. wid.”

In one typical story Schwartzberg found in the files, Caroline Dunkel and John Martin married in 1859. After serving in the Civil War, Martin left home to start a bookbindery, asking his wife to sell his things and then follow him. Instead, he met up with a woman who had washed and cooked for him during the war, whom he may already have married bigamously in 1863 under the name John McAninch. Dunkel never saw him again. Eventually, she moved back into her father’s house and served as a family caretaker. Martin lived with this “second wife” until he died in 1878.

Some husbands left home for long periods to work, and, in a time before telephones, it was easy for a man to drift off. Schwartzberg quotes one girl who explained her parents’ situation like this: “Father was a steam-fitter by trade and in connection with his work frequently went away to other places and the last time he simply went away and she heard from him a few times and then the correspondence discontinued.”

Schwartzberg found that some women mentioned in the pension records were legally bigamists or adulterers too. In some cases, they remarried or cohabitated with another man after a husband wandered off. Other times, women chose to leave a marriage but didn’t bother with the difficulties of getting a legal divorce before entering a new relationship.

Some of the pension cases involved competing claims over whether two people had ever been legally married. Schwartzberg writes that one case involved 12 marriage-like unions. A witness in that case noted that “They parted on and off like lots of people will.”

"Lots of Them Did That": Desertion, Bigamy, and Marital Fluidity in Late-Nineteenth-Century America
By: Beverly Schwartzberg
Journal of Social History, Vol. 37, No. 3 (Spring, 2004), pp. 573-600
Oxford University Press 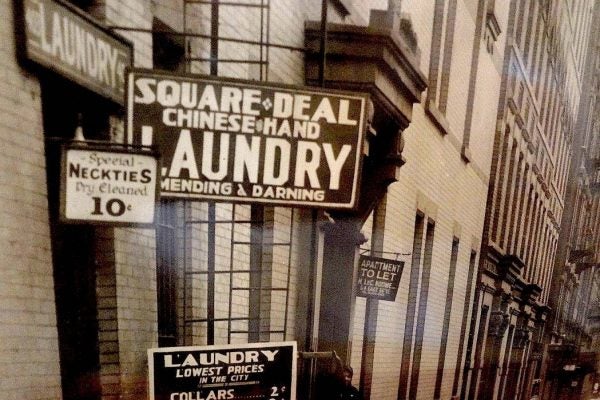 “White Power Laundries” and the Clash Over Asians in America

The dark history of white power laundry and asians in America.