The Park of Monsters

Constructed in the mid-16th century by Pier Francesco “Vicino” Orsini, this bizarre pleasure garden features twelve strange, disturbing statues–and no one knows why. 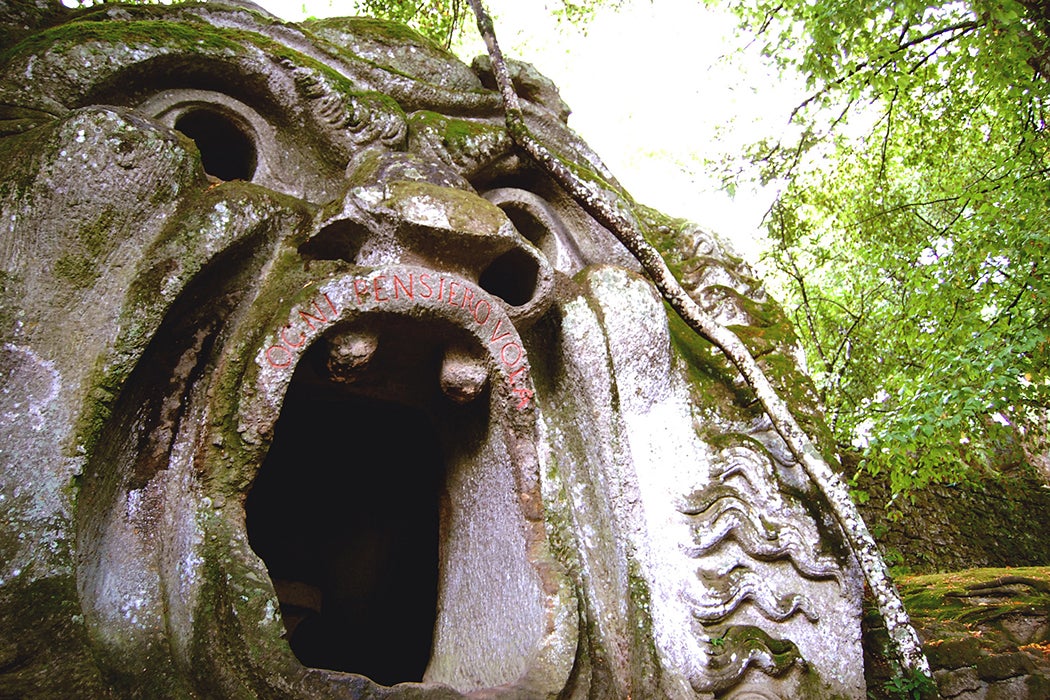 The Parco dei Mostri, or Park of Monsters, is not your typical Renaissance pleasure garden. Constructed in the mid-sixteenth century by the duke, military man, and patron of the arts Pier Francesco “Vicino” Orsini, it features twelve strange and sometimes disturbing statues carved out of peperino (a type of volcanic rock) which have baffled visitors almost since their creation. Instead of the tidy hedges, wide terraces, and pretty fountains typical of formal Renaissance gardens, there are giants, a dragon, a sea monster, a giant turtle, and a gaping hell mouth etched with the phrase “All reason departs.”

There’s no continuous scale or perspective in the sculptures, no obvious plan. The “long vistas and the symmetrical design of the usual Renaissance garden have been studiously avoided,” writes ancient technology historian John P. Oleson in The Art Bulletin, “instead there are short avenues, partial symmetries, and a general air of chaos and surprise.”

What could have prompted Orsini to construct something so unusual? Some point to literature; writing in Garden History, art historian Lynette M. F. Bosch notes that “As a sacra bosco [sacred wood] the garden belongs to a literary tradition of enchanted forests that can be traced from Ovid and Virgil to Ariosto and Tasso.” In fact, Orsini may have been particularly influenced by Torquato Tasso’s Gerusalemme Liberata—an epic poem in twenty cantos that involves a fictionalized version of the First Crusade—which Bosch notes been suggested as the source for the figures in the garden known as the Gigante, River God, Sleeping Nymph, and Abundance. 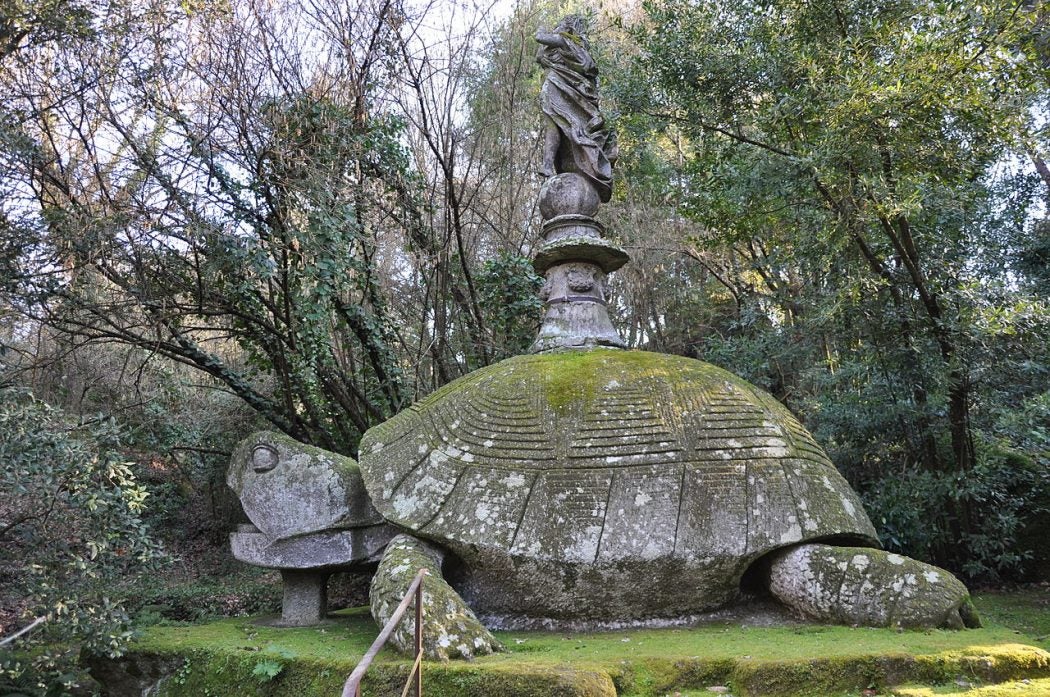 A giant turtle in the Parco di Montri 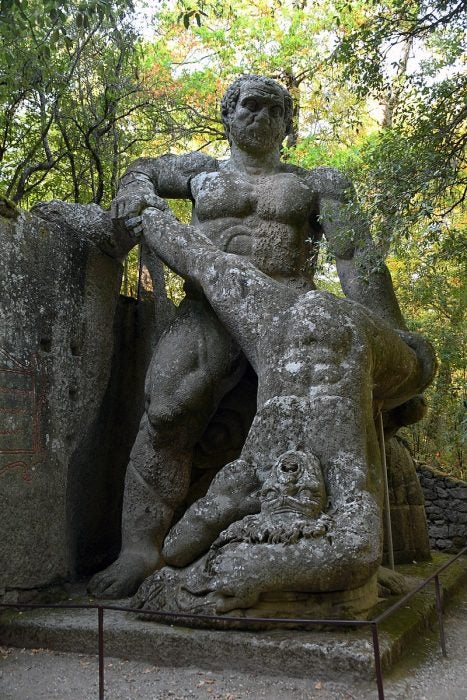 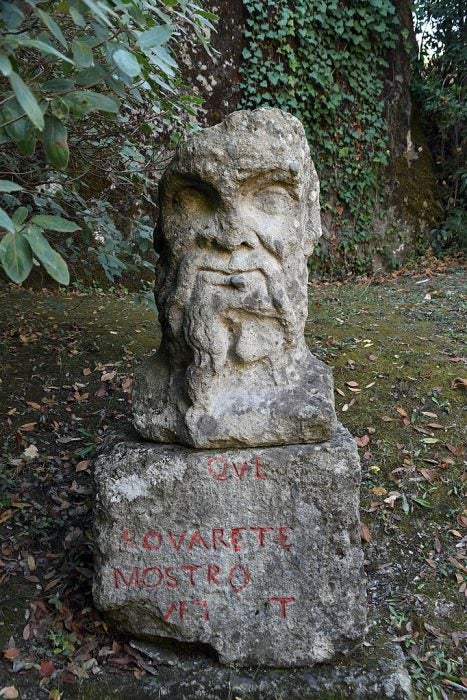 Francesco Colonna’s Hypnerotomachia Poliphili has also been cited as the origin for the garden’s Tempio, Elefante, Drago, Fortuna, and Sirena. As art historian Esther Gordon Dotson writes in Art Journal, “In the Hypnerotomachia poliphili of Francesco Colonna, published in Venice in 1499, the hero undergoes various trials and adventures in a magic park peopled by creatures quite similar to those of the Sacro Bosco.”

Yet others look for inspiration in the events of Orsini’s life. As Bosch writes, “The suggestion that Bomarzo’s figures are autobiographical is strengthened by analogies that can be drawn between Vicino’s personal history and the symbolism of his garden’s statues. The creator of Bomarzo’s fantastic park was a man of almost legendary accomplishments; a distinguished soldier, a sensitive poet and a devoted husband.” As a military leader in the pope’s army, Orsini participated in the Battle of Hesdin, where a kinsman was killed and he was taken prisoner by Philibert of Savoy. He fought continuously for three years, until the treaty of Cateau-Cambrésis brought peace and he was able to return home.

Not long after Orsini returned home from war, he suffered another blow—his wife Giulia died. Some have argued that the Tempio served as a kind of mortuary chapel to her, and that some of the garden’s more shocking sculptures were created as part of Orsini’s grief. Yet the duke continued work on the garden long after Giulia’s death, and some scholars think later sculptures commemorated other relationships.

Orsini apparently recovered enough to start painting the garden in bright colors during the 1570s. His work there ended only with his death in the 1580s. The garden was apparently forgotten, at least by the wider world, for many years, until the Surrealists rediscovered it in the twentieth century. Salvador Dali shot a short film there, and the park inspired one of his paintings, The Temptation of Saint Anthony. It’s since inspired several novels, as well as an opera.

Yet it has eluded scholars’ attempts to completely understand it—which, after all, may have been just how Orsini wanted it. 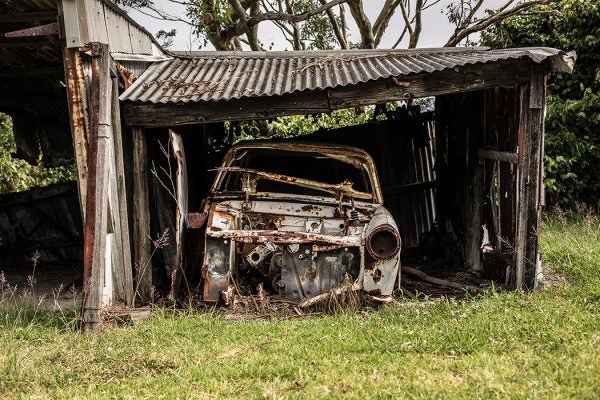