The Long History of Same-Sex Marriage

Same-sex marriages, in all possible configurations and with all possible motivations, have taken place throughout the history of the United States.

Marriage is a historical construct, the meaning of which has changed over time. And the roads to same-sex marriage, unions which one Supreme Court Justice called “newer than cell phones” in 2013, are actually long and winding. As scholar Rachel Hope Cleves reports, “The available sources reveal same-sex marriage as a culturally legible practice that took place over centuries of American history.”

Cleves discusses same-sex marriage in America from the sixteenth century to the 1970s. These were not the long-term relationships that we might now think of as marriages, but “marriages labeled so in their own times and places.” It’s what people then called them.

Even a legal definition is no sure guide, for the “history of marriage cannot be neatly divided into legal marriage and marriage-like unions.”

Such relationships may, of course, not have been legal. But Cleves writes that “the definition of marriage cannot be restricted to its legal boundaries since people in past societies did not always live by those limits.” The legal definition(s) of marriage didn’t necessarily capture the “lived reality” of human beings. But even a legal definition is no sure guide, for the “history of marriage cannot be neatly divided into legal marriage and marriage-like unions.” The distinction between the two were long “a subject of negotiation” under common law and community mores—for instance, those followed by the Martha’s Vineyarders who tolerated Deborah Lewis (later Deborah Francis), “who lived as a woman for thirty-two years before declaring himself a man in 1764 and wedding a widow.”

Cleves’s work here is necessarily a survey, touching upon indigenous traditions; “female husbands”; intersex persons; “Boston marriages”; “bachelor marriages”; the emerging homosexual cultures of the twentieth century; and queer culture at sea, among other manifestations of unions that were called marriages in their own time. She also discusses cultural aspects of same-sex couplings, such as “fictive marriages,” including to Jesus by men as well as women, and Mark Twain’s story “How Nancy Jackson Married Kate Wilson,” which he considered so risque he didn’t dare publish it. Contemporary readers may also be surprised by “manless” and “womenless” weddings staged by women’s and men’s clubs as fundraisers for Liberty Bonds in the early part of the twentieth century.

One particular court case jumps out: in a 1923 Chicago murder trial, the judge ruled that “the fact that Thompson was a man did not affect his status as a wife, insofar as interpretation of the law is concerned.” This meant Thompson wasn’t allowed to testify—since under the law at the time wives couldn’t testify on behalf of their husbands.

Same-sex couples—as well as enslaved couples, mixed-race couples, the self-divorced, and the polygamous—may or may not have been sanctioned by the state, yet they existed nevertheless. Historical same-sex couples may not have been spoken of (or thought of) by contemporaries as having sex, yet they could also be seen “like” or “as” “man and wife,” even as many of these commentators claimed such unions were an impossibility.

“To preserve the gender hierarchy that normative marriage constructed, the language of impossibility could be inflected to penalize men who forsook and thus denaturalized masculine privilege,” Cleaves notes, “while the language could also be softened to accommodate women who sought, more understandably, to escape their feminine bonds. It could be adapted to extend toleration to couples whose ties of kinship made them valued members of the community or it could be used to rationalize expressions of violence against out-groups.”

Just as the definition of marriage has been fluid and contested over time, historical accounts of same-sex marriages—typically written by observers, not the participants—raise many interpretive challenges today. How they are framed now is part of the mutability of history itself.

As Cleves asks, “Should they be understood as same-sex narratives or should they be framed within a history of transgender that is still being delineated from lesbian and gay history? How can same-sex marriages be constructed as a historical category in light of changes in the understanding of embodied sex over the past five centuries?”

Editor’s Note: This article has been edited to change the word “slave” to “enslaved.”

"What, Another Female Husband?": The Prehistory of Same-Sex Marriage in America
By: Rachel Hope Cleves
The Journal of American History, Vol. 101, No. 4 (March 2015), pp. 1055–1081
Oxford University Press on behalf of Organization of American Historians 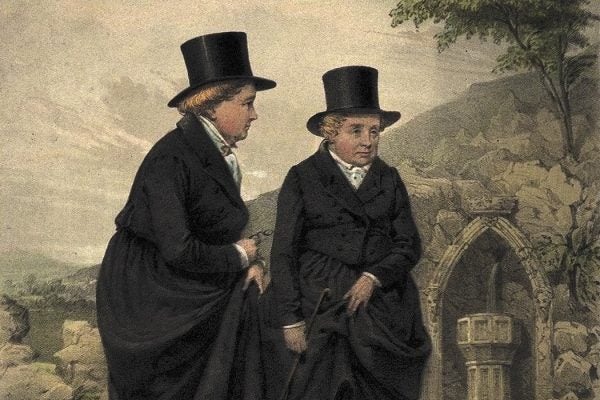