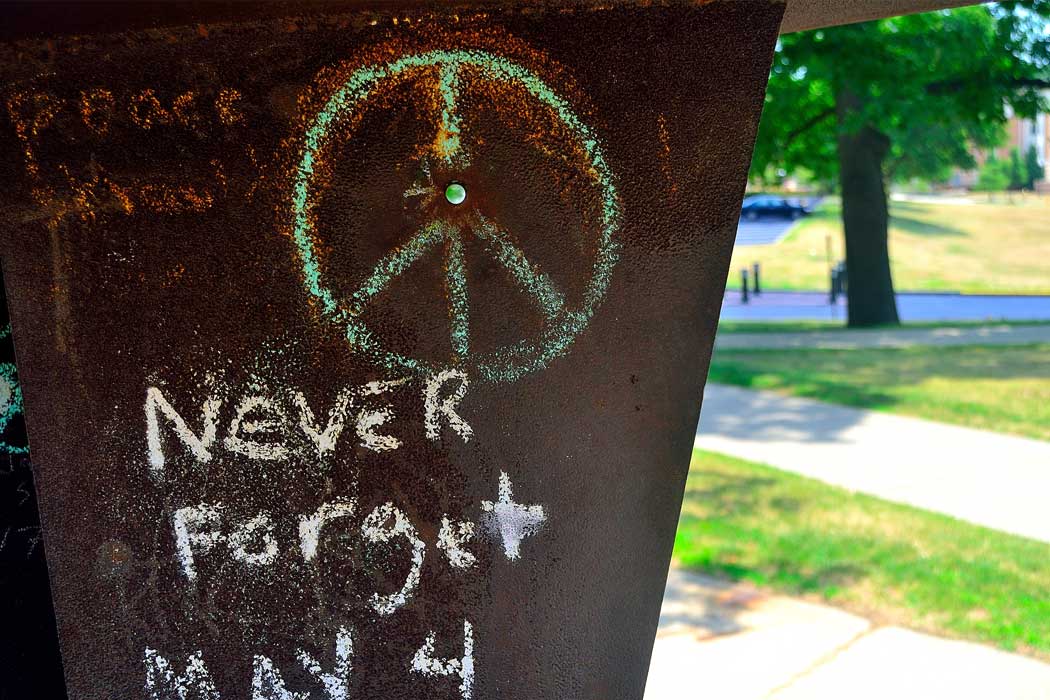 A bullet from the protests left a hole in a sculpture on the Kent State campus
via Flickr/Steve Grant
By: Peter Feuerherd
2 minutes
Share Tweet Email Print

The May 4th, 1970 killing of four students at Ohio’s Kent State University marked both the height of an era of campus protest and the beginning of its demise. It was an unseasonably warm day when students gathered to protest the recently-announced invasion by U.S. troops of Cambodia, part of the Vietnam War. Ohio National Guardsmen were called out to police the protests, in part because earlier protests had turned violent; just the day before, the campus ROTC had been burned down. After shots rang out, two students were immediately killed, two died soon after, one was paralyzed for life, and eight were severely wounded.

The killings, historian John Fitzgerald O’Hara writes, “became a source of public trauma as the event came to symbolize the fracturing of the social body and the breakdown of democracy.” The tragedy became national news; a dramatic photo of a teenaged girl next to a dying student was plastered over the front pages of newspapers around the country. Those sympathetic to the protesters saw the event as more than simply a terrible misunderstanding at an obscure state-run university in northeast Ohio. As O’Hara put it, the deaths “fanned the flames of war dissent and called into question the integrity of government leadership.”

Questions about the deadly protests and National Guard response linger, notes one historian.

O’Hara suggests that prominent politicians set the stage for the killings. President Richard Nixon referred to student protesters as bums and vice president Spiro Agnew invoked the image of brownshirt mobs. Ronald Reagan, then California governor, would later develop a more easygoing image as president. But at the time he said of student protesters, “if it takes a bloodbath, it takes a bloodbath. Let’s get it over with.” Local politicians such as Ohio Governor James Rhodes echoed the national rhetoric and the police chief warned that the protests at Kent State could result in shootings.

Questions about the events linger, notes O’Hara. Were the shootings pre-meditated? Was the ROTC Center burned down not by student protestors but by FBI-sponsored provocateurs? Did the White House intervene in the eventual dismissal of civil rights charges against eight Guardsmen? O’Hara argues that while the university has routinely commemorated the events that thrust it into the national news, it has never fully confronted the hard truths of the difficult era.

In a national student survey, researcher Donald L. Thistlethwaite saw few changes among college students across the U.S. by the following year. He noted that May 4th, 1970, marked a time when American society was more divided than ever.

But in retrospect, the events at Kent State marked the ending of widespread campus protest left over from the turbulent 1960s. The heyday of intense and sometimes violent college student protest and the reaction it engendered had passed. Over the next few years, Nixon gradually wound down the American ground presence in the war and ended the draft, calming campus tensions.

The annual commemorations, according to O’Hara, including artwork commissioned to memorialize the event, have turned from somber to “a surprisingly buoyant fete of postwar unity and historical reconciliation.” 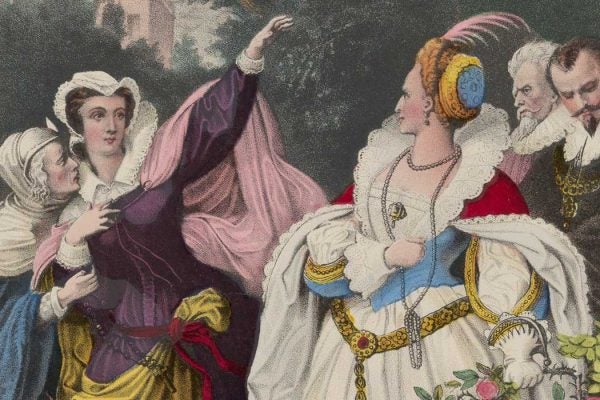 The Literary Propaganda Campaign Against Mary, Queen of Scots

May of 1568 was a fateful month for Mary, Queen of Scots. She managed to escape prison, but only to be being defeated in battle soon after. Then she made the fateful decision to run to England.