The objects purported to speak for the wearer: “Hold me! I have run away.” 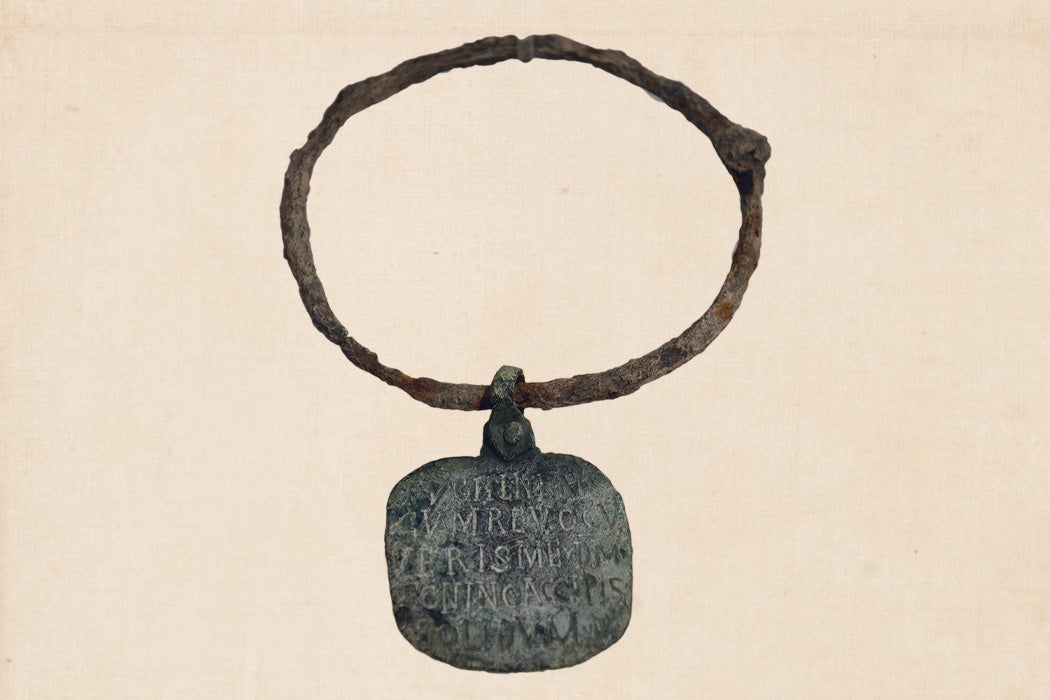 Ancient Roman slave-collar found in Rome with a bronze disc announcing the reward for returning the runaway slave to his or her master, Zoninus, 4th-6th century AD
via Flickr
By: Caroline Wazer
3 minutes
Share Tweet Email Print

Among the most fascinating relics of ancient Roman culture are “speaking objects,” a broad category of artifacts bearing inscriptions written in the first person, as if the object itself is addressing the viewer. Tombstones asking passersby to stop and contemplate life are one classic example; also common are personal items such as wine cups inviting drinkers to have a good time. In stark contrast are “speaking” slave collars dating to the fourth and fifth centuries CE that are inscribed with variations on the phrase “Hold me! I have run away.”

Classicist Jennifer Trimble explains why these speaking objects are so fascinating. Although they “make visible the lives of some of the most invisible people in the historical record,” she writes, the collars’ first-person inscriptions often say where and to whom the wearer should be returned—presumably not what someone hoping to escape slavery would choose to say with their own voice.

“For some slaves at least, a metal neck collar was permanent.”

To complicate matters further, about half of the roughly forty-five known examples were discovered before the emergence of rigorous archaeological standards for documenting objects’ findspots and contexts. This means that we simply have no idea where—or even when—some of the most famous slave collars were originally found, such as the so-called Zoninus collar now in the collection of the Museo Nazionale Romano.

On the other hand, the specimens that were excavated more recently show a range of archaeological contexts so wide that it is almost impossible to make generalizations: some have been found still attached around a skeleton’s neck, indicating that “for some slaves at least, a metal neck collar was permanent,” while others have been found in trash heaps and gutters, perhaps discarded by successful fugitives.

It may be tempting to give up on trying to pull any concrete information about the lives of enslaved people in the Roman world from these artifacts, but, Trimble writes, “abandoning the archaeological study of these collars means ignoring valuable evidence of ancient slavery and of slaves’ lives.”

One way forward, Trimble suggests, is focusing on how the collars’ physical characteristics and inscriptions worked in concert. The metal bands that survive have circumferences similar to those of the collars of modern dress shirts in a men’s size small or medium, meaning that they would have fit snugly around wearers’ necks—not necessarily painfully, but a wearer would be constantly aware of the collar’s presence. Furthermore, the position of the collar on a wearer’s body would have meant that wearers would not have been able to read the inscriptions themselves (if they were literate at all). “For the slave,” therefore, “the collar was experienced physically; for everyone else, it was primarily a visual experience, something seen. The collared person felt the collar around her neck but saw it primarily through the eyes of others.”

Perhaps the most important thing the collars have to tell us is simply that Romans had a great deal of anxiety about the people they enslaved running away. “Whether these collars respond to potential or actual escape attempts,” Trimble concludes, “they indicate some direct resistance. In other words, these collars attest simultaneously to degrading and painful punishments and to the determination and courage of the people who wore them.”

The Zoninus Collar and the Archaeology of Roman Slavery
By: Jennifer Trimble
American Journal of Archaeology, Vol. 120, No. 3 (July 2016), pp. 447-472
Archaeological Institute of America 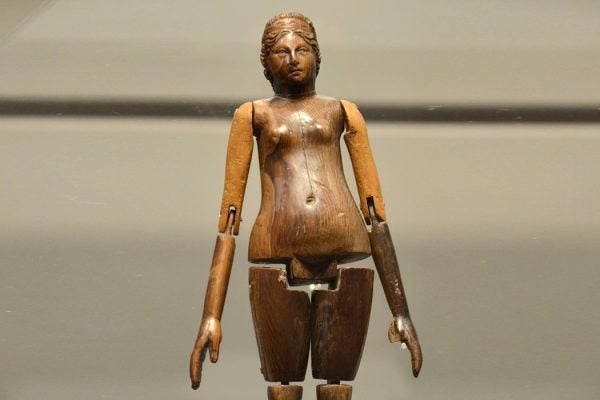