The first U.S.-born Latino astronaut to pilot a space mission blazed the long road to NASA with determination and optimism. 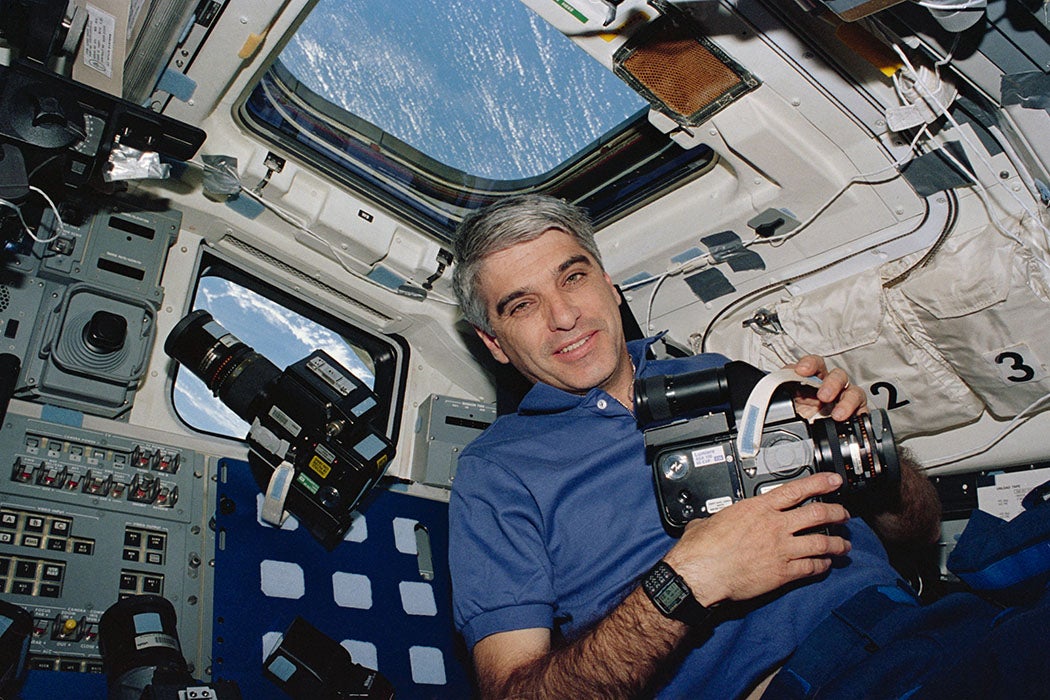 When Sidney M. Gutierrez was a boy growing up in Albuquerque, New Mexico, he dreamed of exploring the cosmos. In 1991, after years of hard work and dedication, he made history as the first person of Latino heritage ever to pilot a space mission.

“Not even the sky is the limit for the 40-year-old Hispanic astronaut,” proclaimed Marie E. Ferrey in an interview with Gutierrez preceding the launch of the Space Shuttle Columbia, which carried him and his crew on a research mission. “He has meticulously designed every step of his career to fulfill his childhood dream of going up in space.”

Gutierrez’s first step was making it into the Air Force Academy. There, he joined the parachuting team, writes Ferrey, where he earned the title Master Parachutist. In 1973, he would graduate at the top of his class with a degree in aeronautical engineering.

Over the years, he logged over 4,500 hours of flying time in approximately thirty different types of airplanes, sailplanes, balloons, and rockets.

Gutierrez spent the 1970s working as an instructor pilot and, later, test pilot. Over the years, he logged over 4,500 hours of flying time in approximately thirty different types of airplanes, sailplanes, balloons, and rockets. He also had to fight back against his superiors, who attempted to assign him to a desk job, writes journalist Carmella Mellado.

Gutierrez was thirty-two years old when he got the call from NASA, in May 1984. He had carefully amassed a combination of academics and flying experience. “He was well aware of the numerous qualifications required to be selected as an astronaut candidate,” writes Ferrey. “So, he deliberately waited until he reached a point in his life when he met all the qualifications.”

Guiterrez also played a key role in helping America recover after the Challenger explosion in 1986. He was chosen to be an action officer at NASA Headquarters. “President Reagan would get letters from around the country about the accident,” Gutierrez said in a 2019 interview. “I am actually the person who drafted many of those responses for him to send back.”

On the heels of the Challenger tragedy, Gutierrez was chosen to pilot the Columbia. On June 5, 1991, Americans held their breath as the shuttle launched into the atmosphere, without incident. It was Gutierrez’s first time up in space.

Along with Gutierrez, the ship carried six other people, thirty rodents, and thousands of tiny jellyfish. It was a unique mission, dedicated solely to life-science research. The crew spent nine days, three hours, and fifty minutes in space. “The success of this mission…was, in large part, due to the professionalism and expertise of crew member and pilot Sidney Gutierrez,” writes Mellado.

For his second and final space mission, Gutierrez would serve as mission commander for the Space Shuttle Endeavour in April 1994. He retired from NASA soon after. He is currently the CEO of a company called Rocket Crafters.

“I never thought there would be any limitations as to what I could do. I never felt that I was limited by my ethnic background,” Gutierrez said in 1992. “I did run into people who were discouraging and who didn’t have confidence in me, but I always wondered why they were so mixed up, because to me, it was obvious that I could do it.”