Widespread market failure and unemployment triggered by the coronavirus pandemic have set off a crisis of domestic migration in India. 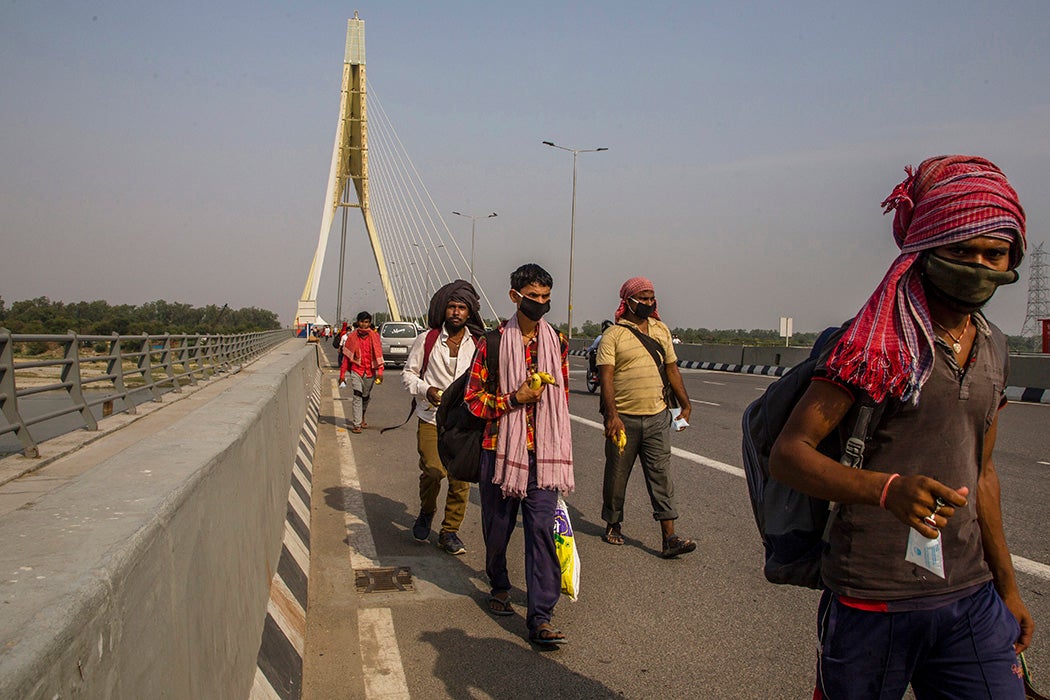 Indian migrant workers walk on a bridge after they were stopped by police while returning to their native places on May 14, 2020 in New Delhi, India
Getty
By: Sergio Infante
8 minutes
Share Tweet Email Print

The coronavirus pandemic has triggered the worst domestic migration crisis on the Indian subcontinent since Partition in 1947. Millions of unemployed wage laborers have left crowded cities for the countryside even as tens of thousands of their compatriots remain abroad, unable to obtain flights home because of the lockdowns and border closures that governments around the world have imposed. The future of travel does not look any rosier: Indian aviation experts predict that flying will be more restrictive and expensive after the pandemic. At the same time, however, public health officials have cautioned that governments must avoid certain kinds of density and crowding to prevent a second wave of infections. This has revived the specter of overpopulation—a specter that has, for the longest time, haunted India.

In April 1930, for instance, C.F. Andrews—a Christian missionary and social reformer who collaborated with M.K. Gandhi, the Indian anticolonial leader—wrote an article in Foreign Affairs about “India’s Emigration Problem.” His point about emigration was simple: there wasn’t enough of it. Andrews believed that British India, a territory that stretched from present-day Pakistan all the way to today’s Myanmar, was “seriously overpopulated” and that the population problem was “becoming every day more and more acute.” But for several reasons, many of them having to do with the Great Depression and the immigration restrictions that countries as different as Australia and the United States had imposed, the Government of India could not export “this surplus of population.”

In any case, the costs of displacement remained prohibitive throughout the thirties. In 1932, the price of a second-class ticket to Brazil—one of the major immigrant-receiving countries of the early twentieth century—was £60-80. In today’s prices, the cost of emigration for a family of five works out at £22,000-25,000. At a time in which the annual per capita income in India hovered around £2-4, it would probably have taken a peasant family several decades to build up the capital necessary for emigration.

If the land had yet to exceed what Hutton and others considered the natural carrying capacity, why did the government fret about overpopulation?

The Census of India 1931, available through the South Asia Open Archives, a rich and growing curated collection of key historical and contemporary sources from and about South Asia, is one of the first to deal consistently with the question of overpopulation. The report for the state of Gwalior, for instance, proposes that colonial administrators “study the incidence of this evil… and observe the restlessness through which it makes its voice heard.” And the report for the state of Travancore concludes that “the remedy for over-population must…be sought in measures other than emigration to foreign countries.” At the same time, however, J.H. Hutton, the Census Commissioner for India, notes that there were not, in fact, too many mouths to feed: he writes that “there was no serious famine in the decade under review”—that is, from 1921 to 1931—and that “every year sees improved methods of fighting such epidemics as cholera, plague or kala azar.” More important, he observes that agricultural production increased steadily throughout the twenties, writing that “the point has not yet been reached at which the ability of the country to feed its occupants is seriously taxed.” If the land had yet to exceed what Hutton and others considered the natural carrying capacity, why did the government fret about overpopulation?

The global economic downturn lay behind it all. The Government of India subtly redefined overpopulation in this period to reflect the fact that—although there was enough food to feed the populace—the economy was unable to support India’s laborers. This marks a break with older discourses on population, many of them inspired by the eighteenth-century British economist Thomas Malthus, who famously predicted that population growth would outstrip agricultural production. Hutton writes that, at the population levels the census had recorded, “unemployment will arise and the fact that the food supply is adequate is to this extent irrelevant.” He and his colleagues feared “a floating population which is not engaged in agriculture and which has nothing to exchange with producers for the food which it requires.” In short, it was the market—and not the land—that set the bar for an optimum population.

The Government of India was not alone in redefining overpopulation: economists and demographers around the world factored unemployment into their accounts of migration and population growth. Harold Fields—an influential voice in discussions of U.S. immigration policy—writes that several of his colleagues believe that “movements of peoples from one locality to another, when intelligently undertaken, remove from a high pressure area the consequences of unemployment and transfer the excess labor to low pressure areas,” thereby eliminating overpopulation. And one of the foremost labor economists of the period, Robert Kuczynski, notes that “if there were fewer people there would be no need for territorial expansion, every one might find work at home, and every one might get a larger share of the social product.”

But in India, fears of overpopulation and unemployment were also tied to the law-and-order situation. Colonial officials were perplexed by the teeming of the Indian masses and worried that, when not gainfully employed, their idle hands would indeed be the devil’s playthings. In this context, it is telling that several of the English words used to describe criminals, such as “goon” and “thug,” either come from, or have been influenced by their passage through, Indian languages.

The slowdown of the thirties also impacted the mobility of Indian wage laborers in ways that eerily resemble what we have seen today. Hutton notes that, in the wake of the Great Depression, countless laid-off workers returned to their rural homes “instead of migrating to the ports of Bombay and elsewhere where in normal years they are employed.” And to prevent the overproduction and devaluation of export goods, the Government of India limited jute cultivation and the output of tea and rubber. This drove agricultural employment down and sent even more wage laborers packing. Perhaps more grievously in the long term, it multiplied the pressure on already depleted tracts of land. Consider Ahmednagar district. The “increase of 35 percent” in this “rather barren upland in the Deccan which suffers from recurring famines is not due so much to a series of good years or to an extension of cultivation on the subsistence margin, as to the trade depression, resulting in numbers of the population staying at home instead of migrating,” Hutton notes.

In the United States, the Great Depression drove the decline of laissez faire dogma and the rise of a more interventionist approach to the economy. New Delhi, by contrast, maintained minimally interventionist policies that would do little to affect unemployment. The thirties did see one major shift away from conservative economic orthodoxy, however. Under the influence of such economists as John Maynard Keynes—who, it must be said, had worked at the India Office in London and developed many of his views by analyzing the Indian context—Great Britain abandoned the gold standard in 1931. The move away from gold freed the Bank of England to print sterling at will, meeting the demand for money to settle outstanding debts and putting the empire on the road to recovery. But as two Indian statisticians—H. Sinha and J.C. Sinha—wisely note, the “role of cheap money is mainly confined to removing obstacles to trade revival, rather than creating actual recovery.”

The downturn also exposed contradictions and inefficiencies in the way that the market allocates goods and people. Just as nowadays the Guardian reports that U.S. farmers “are destroying mountains of food” on the eve of a global hunger crisis, so too in the Great Depression were the best Indian soils focused on the cultivation and exportation of inedible goods—cotton and jute, for instance—rather than on the foodstuffs that would have pushed the population out of subsistence and might have alleviated a major famine when it did eventually come to India in 1943. In an article entitled “Over-Population in India,” a staff writer for Current Science reflects on the caprices and ironies that the Great Depression unveiled. “Modern civilization,” the author notes, “is full of paradoxes.”

In the midst of plenty, people are allowed to suffer. The banks are embarrassed by a plethora of money, but are unable to release the funds for providing relief to the unemployed. Gold always regarded as an incorruptible standard of currency, has been deflected from its appointed task, with the inevitable effects of discouragement and arrest of business involving human unhappiness. Increase of population considered a sign of public prosperity in the past, has now become a menace. These strange and alarming phenomena in human affairs must inevitably puzzle the ingenuity of all governments, and perturb the hearts of public leaders.

This is a clear and forceful call for government intervention, one that colonial officials in New Delhi and London heeded only with the greatest reluctance. H. Sinha and J.C. Sinha observe that the Government of India’s policy “whether during the depression or the recovery was one of non possumus,” using the Latin for “we cannot.” They immediately clarify their point: it’s not “that nothing was done, but [that] everything was done passively.”

Today, in response to a once-in-a-century pandemic and a severe economic downturn, New Delhi has been similarly passive. In an article for The Hindu, the economists Ramkishen S. Rajan and Sasidaran Gopalan note “the Indian government’s fiscal stimulus efforts have paled in comparison to the rest of the world’s initiatives.” TheFinancial Times’ South Asia bureau chief Amy Kazmin is even more pointed in her critique. She notes that the state is “extending minimal support for India’s poorest through food aid, tiny cash transfers, and enhancing funding for a rural workfare scheme.” And still the ghost of overpopulation lingers. In early May, the United Nations warned of famine in neighboring Pakistan. Several journalists have also noted the fragility of India’s domestic food supply chain, which has already left many of the most vulnerable both hungry and unemployed.

But on the margins of this Malthusian nightmare, there is—thankfully—a silver lining. India’s comparatively young population has been cited as one of the reasons why COVID-19, the disease caused by the novel coronavirus, has not spread more widely throughout the world’s second-most populous country. Whether the age of the population will compensate for its relatively high density, especially in urban areas, remains to be seen.

Share Tweet Email Print
Have a correction or comment about this article?
Please contact us.
coronavirusIndiaJSTOR Primary SourcesmigrationCensus of IndiaCurrent ScienceEconomic and Political WeeklyForeign AffairsSankhyā: The Indian Journal of Statistics (1933-1960)The Annals of the American Academy of Political and Social Science