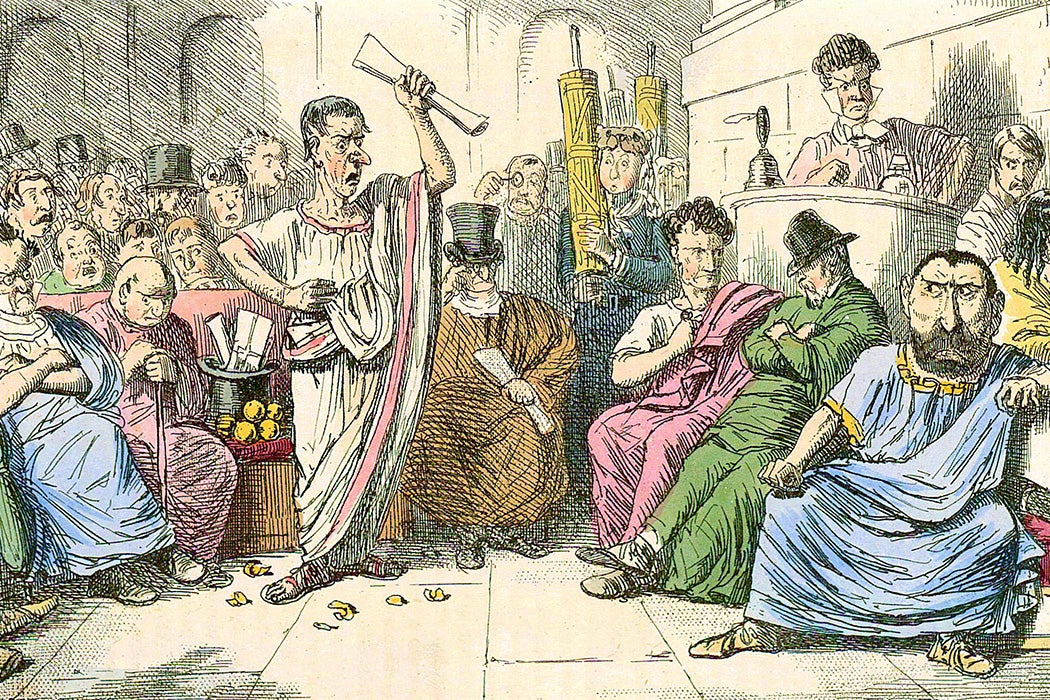 Cicero denouncing Catiline, by John Leech, from: The Comic History of Rome by Gilbert Abbott A Beckett, circa 1850
via Wikimedia Commons
By: Caroline Wazer
3 minutes
Share Tweet Email Print

In 58 BC the Roman statesman Cicero found himself in a tight spot. Publius Clodius Pulcher, Cicero’s longtime enemy, had just been elected to the powerful office of tribune, and was laying the legislative groundwork to have Cicero exiled on the grounds of a controversial decision Cicero had made five years earlier as consul, when he had ordered the execution of participants in the Second Catalinarian conspiracy without a trial.

Cicero’s allies responded by engaging in mutatio vestis (literally, changing clothes), a practice that consisted of swapping one’s regular toga for dirty, drab robes associated with mourning. Commonly used by legal defendants in order to elicit sympathy, the tactic was also used in the political sphere to signify despair or grief at the state of the country and—it was hoped—to secure the allegiance of the populace by tugging on their heartstrings.

In this case public opinion was not sufficiently swayed, however, and Cicero realized he had no option but to flee the capital. “Blind, blind were we,” he wrote his friend Atticus while in exile, “in changing our clothes, in begging the people.”

Even one or two Senators remaining in their normal garb, however, would spoil the effect.

Cicero was not the first, or last, Roman senator to attempt to manipulate politics by donning mourning dress. In fact, as costume historian and classicist Aerynn Dighton explains in a 2017 paper about the practice, Roman senators seem to have turned remarkably frequently to mutatio vestis during the tumultuous middle years of the first century BC, a period shortly preceding the eruption of the civil wars that would result in the dictatorship of Julius Caesar, and the collapse of Rome’s republican form of government.

In a political context, Dighton notes, mutatio vestis served as a “visual spectacle of a unified Senate.” Even one or two Senators remaining in their normal garb, however, would spoil the effect. This is one reason, Dighton argues, why Cicero’s mutatio vestis failed: some of his prominent colleagues refused to participate, shattering the illusion of a unified government standing in support of him.

Nine years later, in January of 49 BC, an even more dramatic invocation of mutatio vestis took place, when the Senate voted to strip Caesar of the personal armies he had been amassing in Gaul. Caesar’s allies, Antony and Cassius, used their veto power as tribunes to quash the decree. The Senate protested by voting to perform a mutatio vestis, an attempt to signal to the populace that leaving Caesar’s power unchecked meant grave danger to the republic. The tribunes responded with another veto, this time forbidding the mutatio vestis—the first time a tribunal veto had ever been used in this way.

When Caesar heard that the Senators went ahead with the mutatio vestis despite the veto, he was furious, explicitly citing this defiance as one of his reasons for leading his armies across the Rubicon and into Italy—a de facto declaration of civil war. The tribunes’ unprecedented veto and the defiant Senators’ disregard for it, therefore, Dighton remarks, “may have driven the crisis beyond repair.” After that point, with peaceful tactics exhausted on both sides, there was no longer any point engaging in mourning that was merely symbolic. It would begin in earnest. 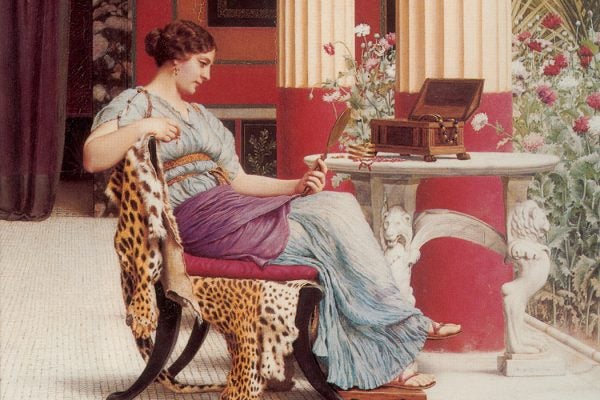 Recipe for an Ancient Roman Glow Up