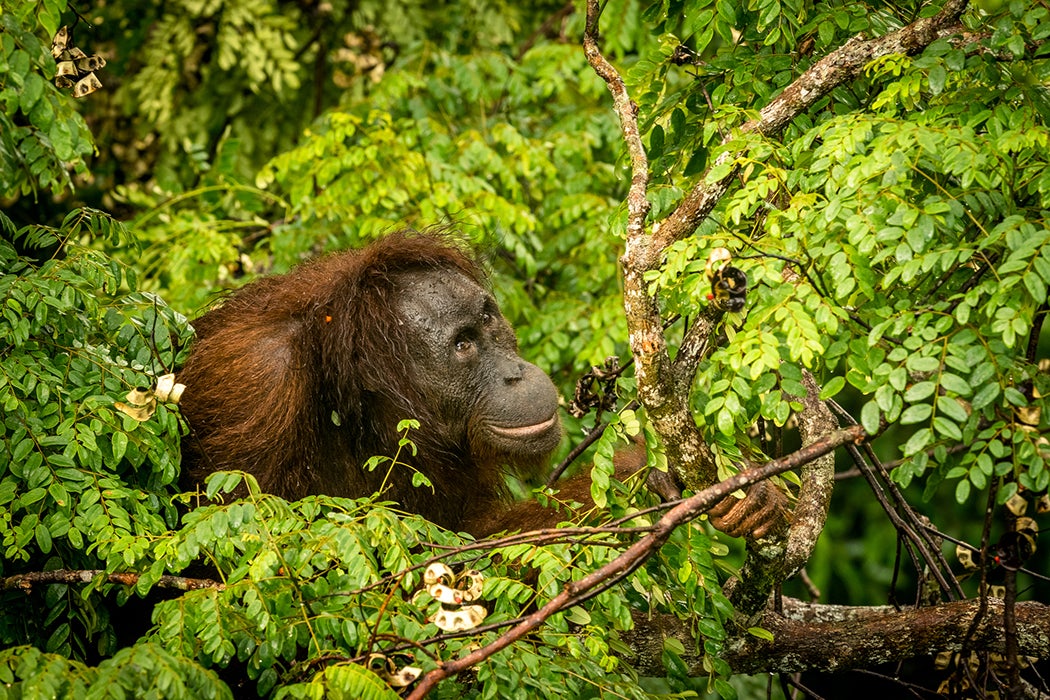 What do orangutans do when their arms and joints hurt? Borneo being short on physical therapists, orangutans, especially adult females, have been known to chew the leaves of a local plant and rub the resulting paste onto the painful area. The plant is well known to local indigenous groups for having potent anti-inflammatory properties. Researchers speculate that the females, tired from lugging heavy orangutan babies through the forest canopy, sometimes need relief for sore, overused arms (Human parents, here is the plant). This is the first known case of a non-human animal producing a topically applied treatment, but according to science writer Joel Shurkin, self-medication among animals has been so widely observed that it has a name: zoopharmacognosy.

The range of animals known to make use of medicinal materials is amazingly broad. To qualify as self-medication, the ingested material should not be part of the regular diet and should provide no known nutritional value. Dog lovers may be familiar with grass-eating, when our canine friends seek to soothe an upset stomach by eating indigestible plant material to induce vomiting. Other examples include certain types of parrots and macaws that eat clay to aid digestion. Some lizards feed on particular roots to help counteract snake venom. Pregnant lemurs have discovered the lemur version of prenatal vitamins, chewing particular leaves to aid milk production, labor, and reduce parasites. Brazilian spider monkeys take fertility-enhancing or contraceptive plants. Nor does self medicating need to be natural. Sparrows have been known to integrate cigarette butts into their nests, having somehow discovered that the nicotine residue impedes parasitic mites.

Chimpanzees were observed consuming the bristly leaves of a bitter African plant. The medicinal plants were purging parasites from the digestive tract, resulting in rapid health improvement.

Zoopharmacognosy has been most intensively studied in great apes, particularly chimpanzees. Starting in the 1980s, researchers noticed that ill chimpanzees consumed either whole, bristly leaves or the pith, or parenchyma, of a bitter African plant.  Neither part of the plant offered anything valuable by way of nutrition, but affected individuals often recovered from their illness. Closer examination of feces showed that following digestion, large quantities of worms and parasite eggs seemed to have been removed. The medicinal plants were purging parasites from the digestive tract, resulting in rapid health improvement. Both materials, especially pith, are consumed by wild chimpanzees in multiple locations. The knowledge is passed on to others, typically to juvenile chimpanzees by their mothers.

However, Western scientists were late to this party. Bitter pith, for example, has been used medicinally in several parts of Western Africa since long before Western ecologists started observing chimps. There is at least one documented instance of a local healer observing a sick-looking porcupine chewing a root; after some careful experiments, he used a preparation of the root to treat an epidemic. The root is still used medicinally in those days. It’s not a giant leap to imagine that our earliest ancestors gained the roots of medical knowledge by observing apes or other animals.

News Feature: Animals that self-medicate: Many animal species have created their own pharmacies from ingredients that commonly occur in nature
By: Joel Shurkin
Proceedings of the National Academy of Sciences of the United States of America, Vol. 111, No. 49 (December 9, 2014), pp. 17339-17341
National Academy of Sciences
Self-Medicative Behavior in the African Great Apes: An Evolutionary Perspective into theOrigins of Human Traditional Medicine In addition to giving us a deeper understanding ofour closest living relatives, the study of great ape self-medication provides a window intothe origins of herbal medicine use by humans and promises to provide new insights into ways of treating parasite infections and other serious diseases
By: MICHAEL A. HUFFMAN
BioScience, Vol. 51, No. 8 (August 2001), pp. 651-661
Oxford University Press on behalf of the American Institute of Biological Sciences