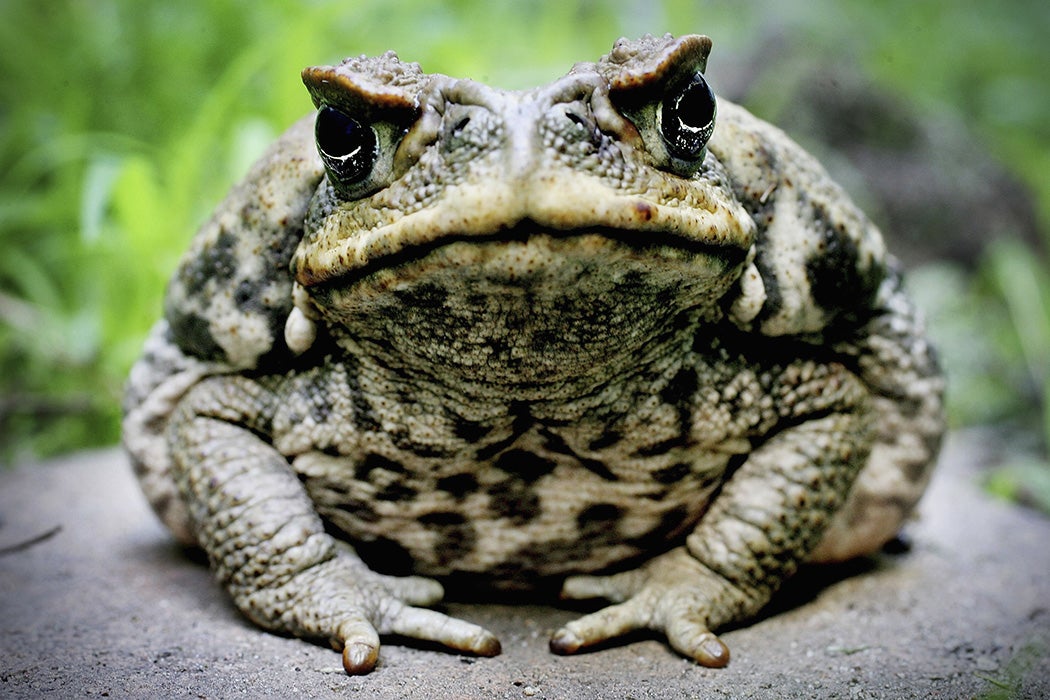 Australia is a classic case study of the havoc created by invasive species. Consider the story of the cane toads and the dung beetles.

Cane toads (Rhinella marina) are a South American species introduced Down Under between 1935 and 1937 by the Bureau of Sugar Experiment Stations. The idea behind the action was that the toads could combat indigenous beetles who were eating sugarcane, another non-native species that was, by that time, a very important crop. The Bureau hoped the toads could replace the toxic poisons that were being used to fight cane-eating beetles.

Cane toad cannibalism seems to have expanded swiftly among the toads as they fanned out from the initial introduction on the northeast coast.

Unfortunately, in addition to cane beetles, cane toads eat almost anything else they can fit into their huge mouths. They chomp on garbage, small birds, small mammals—you name it. They also eat each other. In fact, cane toad cannibalism seems to have expanded swiftly among the toads as they fanned out from the initial introduction on the northeast coast.

In addition, cane toads have toxic skin, which poisons people, pets, and wild animals, including potential predators. Some predators have figured out that turning the toads over bypasses the toxin-producing glands on their backs, but by and large, the large toads have been an unstoppable ecological disaster.

Australia has hundreds of species of native dung beetles who use animal droppings as food for their larval young. Many of them bury the droppings, effectively removing excrement from sight, smell, and fly larvae. (This is, incidentally, a great way to cycle nutrients back into the soil—the ancient Egyptians were onto something when they made the dung beetle sacred.)

But when cattle were introduced to Australia, indigenous dung beetles, who had evolved alongside marsupials, ignored the newfangled bovine poop. So the flies began their reign. Bush and buffalo fly populations exploded as millions of cows went about their business, eating grass at one end and dropping out cow pats at the other. (This is not to mention, since you might be eating, the nematode parasites of cattle who need dung to complete their life cycles…)

Thus was born the Australian cork hat. Wide brimmed with lightweight pieces of cork suspended from the rim, the hat helps keep flies off the face and out of the mouth, nose, ears, and eyes. These used to be essential in the ranching rangelands, where fly plagues tormented both cattle and people. But today. the cork hat is a novelty tourist item. So what happened?

Between 1965 and 1985, the Australian Dung Beetle Project—yes, that was its name—introduced dozens of species of dung beetles from abroad to tackle the introduced “cow dung equals flies” problem. In invasive land, introduced species require introduced species… And lo and behold, the beetles got to work burying all those cow patties, and thus reducing the plague of flies. Australians may not worship dung beetles as the ancient Egyptians did, but they can definitely tip their now corkless bush hats to them.

But then comes the cane toad, nom-nom-noming along. They’re eating dung beetles before the dung beetles can dispatch the dung, which is good for the flies and bad for the cows and the cowpeople.

Chances are, you don’t think a lot about mass loss or decomposition of dung, yet out of such threads is the tapestry of nature, and humans’ weighty presence within it, made. Detritivores, the eaters of dead things, are vital pieces of the whole, yet they rarely get any recognition or credit for their epic works. But take them out of the equation, have them cane-toaded, as it were, and you’ll notice.